The intervention was undertaken by the Ghana National Association of Teachers (GNAT) as part of this year’s GNAT Week and World Teachers’ Day celebrations, which were launched in Tamale on Monday. 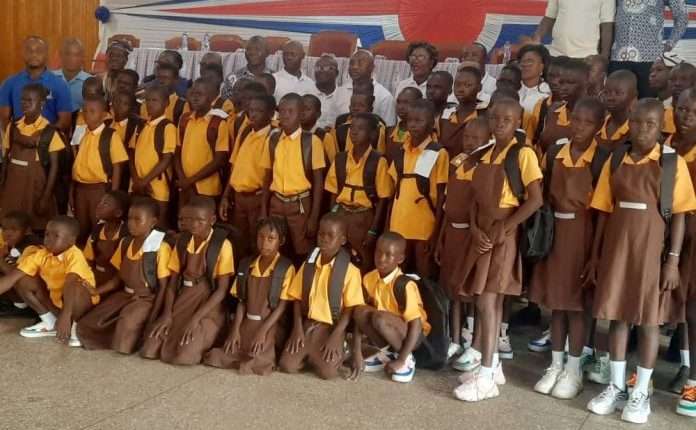 Fifty needy school children (25 boys and 25 girls) in the Northern Region have been provided with school uniforms, school bags, canvas boots and socks to motivate them to remain in school.

They also received packs of exercise books where each pupil would receive three of the books to facilitate their academic work.

The intervention was undertaken by the Ghana National Association of Teachers (GNAT) as part of this year’s GNAT Week and World Teachers’ Day celebrations, which were launched in Tamale on Monday.

The beneficiary pupils were present during the event where they took delivery of the items from the GNAT executives.

Reverend Isaac Owusu, the President of GNAT, said the Association had also selected Sanbiruk D/A Kindergarten and Primary in the Bunkpurugu-Nakpanduri District to benefit from a two-classroom pavilion-type project.

“This is to help in the decongestion of the four classrooms that currently accommodate six classes,” he said.

During the GNAT Week, instituted 22 years ago by the Association, the members are sensitised on its activities, which usher them into the celebration of the World Teachers’ Day on October 5.

The Day is dedicated to highlighting the achievements of educators around the globe and appreciating the important role they play in the future of every generation.
Christened in Ghana as the ‘Ghana Teacher Prize,’ the Day will see the presentation of awards to some teachers for their dedicated service.

Reverend Owusu gave the assurance that “GNAT remains committed to contributing in every way possible to the creation of a conducive environment for sound academic work in our pre-tertiary educational institutions.”

“As an Association, we believe that we have come to a stage in our development where there is the need to transform education to appropriately respond to current needs and challenges.”

He spoke about the Government’s laptop for teachers and called for the urgent distribution to all teachers, adding that those due for promotion should also be promoted to motivate them to continue to deliver their best.

Mr Atta Longiya, the Northern Regional Chairman of GNAT, said teachers in remote and deprived communities faced challenges and advocated they should also be considered for awards during the Ghana Teacher Prize.