Adwoa Safo Speaks after Akufo-Addo Sack: Will she spill the beans on Jubilee House Procurement?

Hon. Adwoa Safo was not removed as Minister for so long for a REASON; 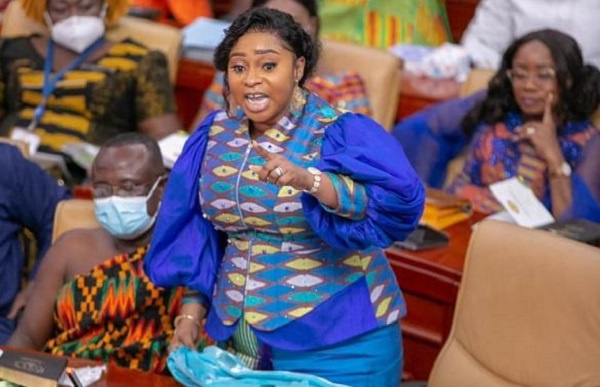 Hon. Adwoa Safo was not removed as Minister by President Akufo-Addo for so long for a REASON;

Hon. Adwoa Safo was once Deputy Majority Leader and Procurement Minister at the Office of the President before her appointment as Gender and Social Protection Minister.

“The Gender and Social Protection has FAILED as has many others…”

Hon. Adwoa Safo has been absent from both Parliament and her Ministry.

Unlike Parliament, somebody is acting in her stead yet the School Feeding Programme, LEAP and other interventions under her Ministry have failed abysmally…

Why didn’t Akufo-Addo sack the Caretaker Minister too?

It is obvious that Akufo-Addo was waiting for Parliament to remove Hon. Adjoa Sarfo as Member of Parliament so he can hang on her removal as MP to remove her as Minister.

There are a number of Failed Ministers still at post.

Thirty (30) new MPs including Ministers who have been exposed by Odikro, the Parliamentary Watchdog as being absentee MPs.

These MPs include the non-performing Ursula Owusu, Kojo Oppong-Nkrumah and Samuel Abu Jinapor who are presiding over Ministries steeped in corruption, MediaTyranny, Land Looting, Galamsey among others.

If Hon. Adwoa Safo was removed for absenteeism and not non-performance or incompetence then he should be looking at the Odikro list of Absentee MPs.

If however, the removal of Hon. Adwoa Safo was for non-performance or incompetence and not absenteeism then Akufo-Addo must revoke the appointment of almost all his Ministers.

The difficulty however, will be not able to have more than ten (10) Minister MP if absenteeism and incompetence or non-performance was the reason for removing Hon. Adwoa Safo.

Hon. Adwoa Safo was not removed as Minister for so long for a REASON;

Hon. Adwoa Safo was once Minister of Procurement at the Office of the President, Jubilee House, now christened Corruption Headquarters because of its notoriety for corruption, Procurement breaches, Sole sourced contracts as highlighted by the Cathedral Corruption Scandal and President’s Sole Sourcing of the Gay-LGBTQI Advocate David Adjaye who was paid upfront without being registered to work in Ghana, the President’s eulogy of David Adjaye amidst the Scandal at the World Bible Museum event in the United States of America…

The Media will pick every expression and ask a full range of questions including the following;

IF SHE WAS EVER IMPERSONATED DURING HER LONG PERIOD OF ABSENCE FROM PARLIAMENT?

Who chartered a Private Jet for her to come and vote for the passage of the non-performing E-LEVY?

Were there any Procurement Breaches at the Office of the President, Jubilee House that she can substantiate?

Did the Chief of Staff at the Office of the President, Hon. Akosua Frema Osei-Opare sent Kennedy Agyepong to wire money into her Fidelity Bank account, which currency was the supposed 124,000?

On the back of the Office of the President being labelled as the Corruption Headquarters and one of the most corrupt institutions in Ghana, with an over Three Billion Cedis Slush Fund allocated in the last budget;

The answers given by the slanging Hon. Adwoa Safo upon her return from Yankee will be interesting…
Adwoa Yankee..

When the Servant is behaving like a Master: Re: Ghana Card and Sim Re-registration