As to whether Parliamentarians will boycott Parliament and therefore the Black Stars because of the incompetent Ken Ofori-Atta... 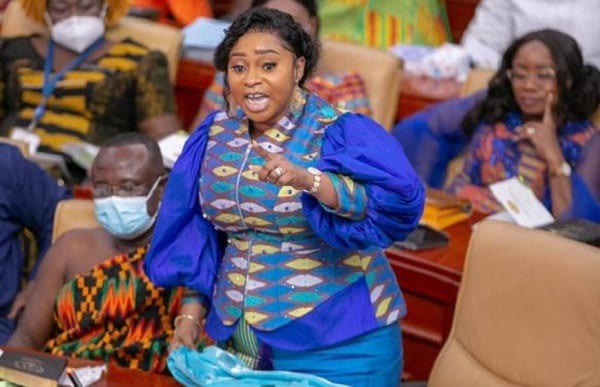 The 2023 Budget is expected to be presented to Parliament today, the real drama will be when it is rejected not the reading, as ONLY ONE NPP MP is required to vote against it, abstain or be absent, to defeat the 2023 Budget; Adwoa Safo is back to Parliament to do just that.

President Akufo-Addo cunningly chose the date for his cousin Ken Ofori-Atta to read the Empty 2023 Budget, which is hinged on an elusive IMF BAILOUT and imposition of more taxes including increasing VAT…

President Akufo-Addo is aware that ALL Members of Parliament will be wearing Black Star replica jerseys or Ghana Flag in support of the Black Stars on 24th November, 2022.

The debate and vote on the Censure Motion seeking the removal of Ken Ofori-Atta will be bigger than the Black Stars World Cup match.

The biggest shock of the Akufo-Addo-Bawumia government’s entire tenure will be when Adwoa Safo shows up in the flesh on the floor of Parliament for the vote on the Approval of the 2023 Budget and Appropriations.

Her absence like in the E-LEVY will be critical as it will imply the vote is lost.

The presence of Adjoa Safo in Parliament, especially in the event of a secret vote, will definitely keep President Akufo-Addo and Ken Ofori-Atta glued on their toilet seats.

The spirited attempt to remove Adjoa Safo and the spirited attempt to save Ken Ofori-Atta will be a Karma which will be served cold not during the reading of the 2023 Budget or Censure of Ken Ofori-Atta but the torpedo of his 2023 Budget which will shutdown Akufo-Addo’s government and be the catalyst for the immediate removal of Ken Ofori-Atta as Finance Minister, Bawumia as Head of the Economic Management Team, Akufo-Addo as President and his government by the People of Ghana.

Adwoa Safo is thus set to make history by making the difference where the other NPP MPs kept wavering under the influence of a still unnamed criminal Bribe-Giving Businessman and coercion of the President and the NPP Party Leadership.

Addoa Safo will win her seat, if she votes with her constituents unlike the other NPP MPs who told Ghanaians what their constituents told them yet are choosing to obey bribe money, shield a bribe-giving Businessman and cowardly towing the party line to please President Akufo-Addo and Ken Ofori-Atta.

Most Ghanaians want Akufo-Addo to resign and Ken Ofori-Atta to be sacked.

Adwoa Safo will be the hero, and get an overwhelming endorsement while spitting on the grave of her detractors in the NPP especially Akufo-Addo who conveniently sacked her after failing to have her removed from Parliament.

Kennedy Agyepong is frantically calling for NPP MPs to support Ken Ofori-Atta but cannot call the most important NPP MP, Adwoa Safo who he has children with, who Kennedy Agyepong claimed was sent by the Chief of Staff to bribe Adwoa Safo with a deposit of $124,000 into her Fidelity Bank account so she come to Ghana aboard a private jet from the United States of America to vote for the E-LEVY.

This is a country which is Broke, Bankrupt and heavily debt distressed by the actions of Ken Ofori-Atta, Charles Adu Boahen, Dr. Addison under the supervision of Bawumia and with the blessings of President Akufo-Addo.

This is a country whose Finance Ministers personal companies benefit directly each time they go binge borrowing and thus have recklessly borrowed Ghana into unsustainable debt.

Some Media houses allowed Ken Ofori-Atta’s Propaganda “Databank Research” to use their airwaves to paint a false picture to facilitate the reckless borrowing leading to Ghana being blocked from the international bond market.

These Media houses which are refusing to name the the criminal Bribe-Giving Businessman who tried to save Ken Ofori-Atta, are currently enjoying a lot of advertising sponsorship from Ken Ofori-Atta’s Databank and Enterprise Insurance while Ghanaians are suffering and Ghana is left with no hope but to go begging for an IMF BAILOUT.

An IMF BAILOUT which should have been taken much earlier to save Ghana, was delayed due to the pride of Ken Ofori-Atta with the support of his cousin President Akufo-Addo.

Rescue Ghana from the Clannish Cousins of the Akyem Mafia Government.

Strangely, Ghanaians who want to protest their suffering and economic situation are frustrated by the Ghana Police Service.

So if all Ghanaians, including the Police are suffering, why are they frustrating Ghanaians who want to exercise their fundamental Constitutional Rights to Assembly and Demonstration against the Akufo-Addo-Bawumia government?

The 28th, 29th and 30th November, 2023 picketing at the Revolution Square opposite the Jubilee House is being organised by the Justice For Ghana Movement.

The Justice Dor Ghana Movement organised a similar peaceful picketing in front of the Parliament House ahead of the E-LEVY.

Ghanaians will not be cowed, they will persist, just like the Black Stars until they win.

Will Akufo-Addo sack Ken Ofori-Atta if the Black Stars win against Portugal or the World Cup?