Afia Kwarteng Asamani Quits Atinka Media, what is next for her?

Authentic Mama's alleged resignation has come as a big shock to many of her fans who claim they never saw it coming.

Unconfirmed reports reaching the entertainment desk of ghananewsonline.com.gh indicate that Madam Afia Kwarteng Asamani, (Authentic Mama) of Atinka Media Village has parted ways with station where she was a newscaster and lead presenter of some of their flagship programs.

Though she would not confirm or deny the rumor when contacted, Authentic Mama’s alleged resignation has come as a big shock to many of her fans who claim they never saw it coming.

Some say they have become addicted to the Atinka Media Village (Atinka TV/Atinka FM), a subsidiary of the Tobinco Group of Companies due to Afia’s good looks and professionalism anytime she is on air.

A post on her Facebook wall on Wednesday suggests to the public that apparently she has been going through a lot of rivalry with some of the station’s presenters who see her as a tough nut and a stiff challenge and perhaps a threat to their shine.

Deep-throat sources close to Authentic Mama say she endured several bouts of frustration while juggling between serving as the Host of popular series, Tumhari Phaki, and as a parliamentary correspondent for the station and news casting.

Afia’s experience in the Ghanaian media space spans over a decade, specifically in news anchoring, TV shows, and parliamentary reporting, among others.

In her last interview with a life and style TV show, Afia revealed that she has never step foot in a Senior High School (SHS). This not withstanding, the award-winning Afia has broken all glasses, climbed the academic ladder, and is currently a Masters Student at the Ghana Institute of Journalism (GIJ).

Her fans are anxious about her next moves. Watch this space. 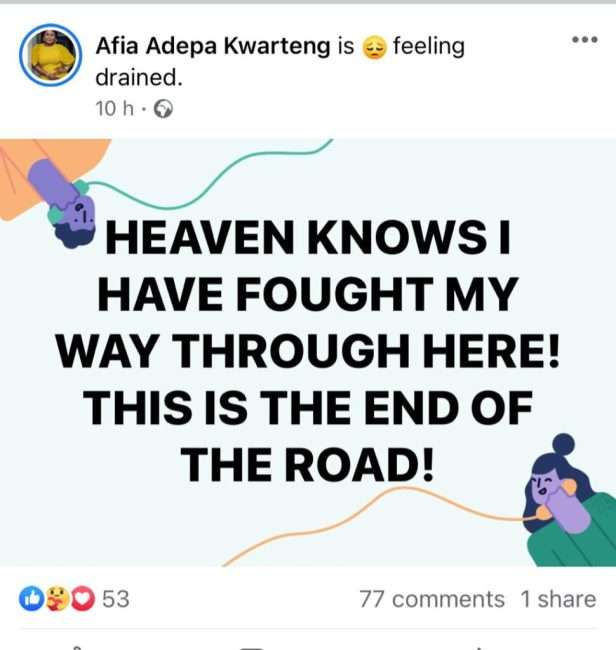 Great Ningo: Planned Celebration of Life of W. G. Nartey is on course