“As President of the Republic, I have made it a priority to re-launch the metro mass transport system in the regional capitals through sustained investments, infrastructure and services,” he said 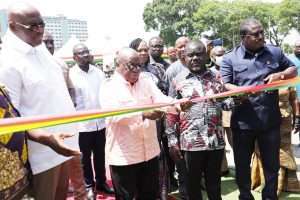 President Nana Addo Dankwa Akufo-Addo has commissioned 45 new buses for use by the Metro Mass Transit Limited (MMl). The 45 buses are the first batch, out of 100 new buses procured for the company.

In his address at the commissioning in Accra, President Akufo-Addo said the purchase was aimed to provide the opportunity for the company to boost the capacity of the country’s public transport system.

He underscored the role of an efficient transport system to the growth and development of the country’s economy.

“As President of the Republic, I have made it a priority to re-launch the metro mass transport system in the regional capitals through sustained investments, infrastructure and services,” he said

The commissioning of the new buses, popularly known as “Kufuor Bus”, was expected to enhance the operations of MML and offer passengers improved services, the President said.

According to the President the project was being implemented in phases, with the first phase covering the purchase of 100 buses as well as plans to restore about 50 broken down buses.
In all, he noted that the first phase of the project would bring on board, 150 buses to the fleet of vehicles of the MML.

“In addition to this, technical assistance in the form of a grant from the government of Belgium is also being provided to cover training of drivers and maintenance staff and operational support to the company”

“I express my sincere appreciation and gratitude to the Belgian government in providing both financial and technical support for the purchase of these buses,” he said

Under the administration of the second President of the Fourth Republic, John Agyekum Kufuor, he said over 500 buses were supplied to the MML through a concessionary financing from the Belgian government.

The Belgian government, he added, had agreed to help Ghana acquire 40 buses every year for the next five years through concessionary financing to augment the fleet of the MML

“This is truly timely and I urge all players to work assiduously as we seek to revamp the operations of the MML,’ he said and emphasised the need for the company to adopt an efficient maintenance culture
“A neglect and mishandling of public assets, unfortunately, has eaten into our social fabric,” he said and, adding that the problem had caused an enormous drain on national resources. 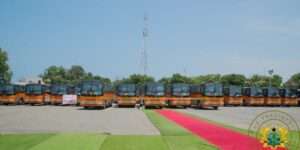 The Minister of Transport, Kwaku Ofori Asiamah, said the MML was established under the era of former President Kufuor as a pro-poor initiative to facilitate affordable and reliable inter-city, inter-urban and rural-urban transportation.
He said the company had provided transportation to “hard-to-reach” areas in the country to ensure that residents in those areas could travel to other parts of the country to engage in agricultural, commercial and other activities.

However, he said the company had suffered challenges through vehicle breakdowns which had affected the quality of services to the public
“Government therefore resolved, as a matter of urgency, to revamp the MML to enable it continue affordable mass transport to all and sundry,” he said, and added that the second batch 55 buses would be supplied to the MML by the end of this year.

GOT A STORY? Share with us. Email: [email protected] or [email protected] WhatsApp: +233(0)244822034
Akufo-Addo BoostsBusescapacityGhanainfrastructureinvestments.Metro Mass TransitPublic Transport
0
Share FacebookTwitterWhatsAppTelegram
Subscribe to our newsletter
Sign up here to get the latest news delivered directly to your inbox.
You can unsubscribe at any time