Bright Adjei scored the only goal of the game in the 49th minute, after a goalless first half, to give the away side all three points. 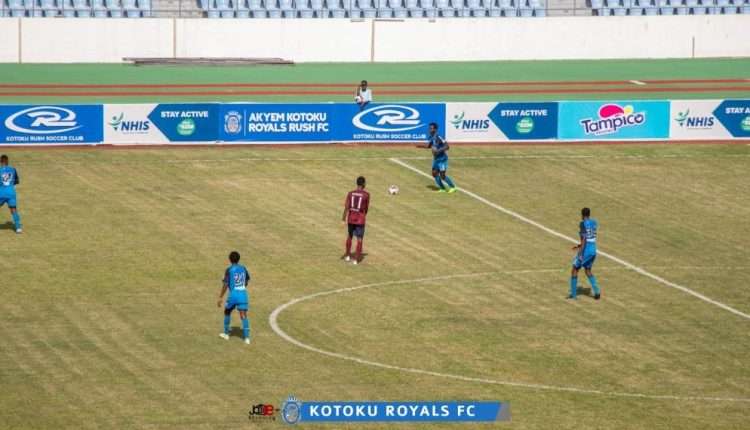 Aduana Stars comitnued their dominance over Accra Hearts of Oak as they beat the Phobians a 1-0 in their first match of the 2022/2023 betPawa Ghana Premier League on Sunday in Dormaa with loss takes the Phobians’ winless run in Dormaa to six games after their last win at the Nana Agyeman Badu Park came in 2014.

Bright Adjei scored the only goal of the game in the 49th minute, after a goalless first half, to give the away side all three points.

Hearts of Oak finished the game with 10 men after Caleb Amankwah was sent off in the 89th minute.

It was a debut delight for Kotoku Royals as they beat Accra Lions 1-0 on Sunday at the Cape Coast Stadium to secure their first win in the top flight.

Augustine Boakye’s goals early in the first half (19 mins) gave the Royals all three points against Ibrahim Tanko’s side.

Accra Lions dominated possession after the goal but were unable to find an equalizer in the game.

At the El-Wak Stadium, nine-man Legon Cities were pipped 1-0 Medeama SC. A second-half strike by Kofi Asmah being enough to give Medeama their first three points of the new season.

Legon Cities dominated the first half but were unable to find the back of the net, ended the match with nine men after Michael Ampadu and Michel Otuo were sent off in the 79th minute.

We are still proud of our Achievements despite losing on our…

Blessing Dana’s goal in the 56th minute was the difference between the two teams as the away team grabbed all three points.

There were positives for Dreams FC as they kept a clean sheet for the first time in many games.

Samuel Atta Kumi scored the only goal of the game in the 54th minute as Karela United secured a narrow win over newcomers Tamale City at the Crosby Awuah Memorial Park.

Real Tamale United handed Samartex thier first points in the top flight as they played out a goalless draw at the Aliu Mahama Stadium in Tamale.

On Saturday, Accra Great Olympics were 1-0 winners over Bechem United at the Accra Sports Stadium.

The Dade Boys left it late to secure all three points courtesy of Samuel Ashie-Quaye in the 81st minute.

COP 27: African Governments must have a common position on Energy Transition plans – NRGI