BIG DRAMA – Ken Ofori-Atta Grilling in Parliament: As his Cousin refuses to sack him

and another Cousin prepares to defend him 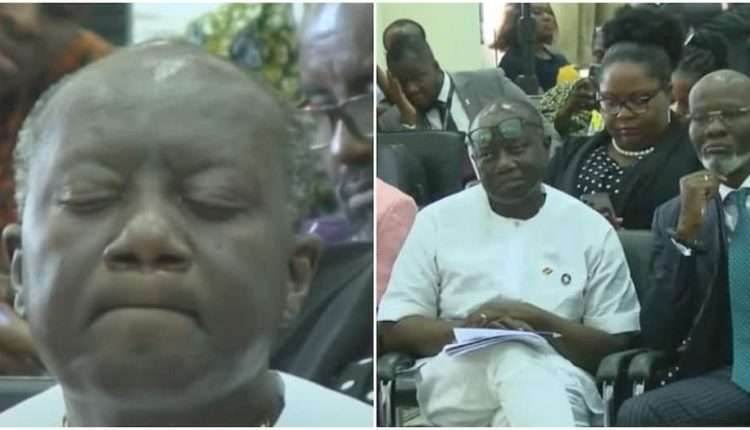 After sacking Charles Adu Boahen on the basis of an allegation ahead of the evidence, Akufo-Addo has refused to sack his cousin Ken Ofori-Atta in the face of a mountain of evidence…

The unfolding drama in Parliament, is in essence two sides of the same fight to oust Ken Ofori-Atta as Minister of Finance with totally different dynamics.

On one hand, the NDC fighting for accountability for the mismanagement, misapplication and misappropriation of public funds by the Akufo-Addo-Bawumia government through Ken Ofori-Atta.

On the other hand, there is a fierce battle by NPP MPs and their sponsors for the soul of the NPP between its Danquah, Busia and Dombo factions via a proxy war that is threatening to bring down Akufo-Addo and Bawumia with Ken Ofori-Atta as collateral damage.

Kweku Baako’s warped explanation for the late showing of the Galamsey Economy video which is part of the Ahmed Suale #12 video indicts President Akufo-Addo, Bawumia and Maame Tiwaa Addo Dankwa among others…

Recall, that ahead of the public screening of the #12 video, President Akufo-Addo and a select few were allowed to watch;

The limited private viewing of the #12video led to President Akufo-Addo ordering the arrest and prosecution of the GFA President, Kwesi Nyantekyi.

Kwesi Nyantekyi was seen in the heavily edited #12video accusing President Akufo-Addo, Vice President Bawumia, Deputy Chief of Staff Asenso Boakye and Roads Minister Amoako Atta and his deputy Anthony Karbo as Bribe-Taking government officials who were willing to sell Ghana to corrupt investors according to a ratio of 3:2:1:1:1 later described as the coefficient of corruption and a token to be given to loudmouth Kennedy Agyepong if the deal was to go through.

Kwesi Nyantekyi who was arrested at the Kotoka International Airport had claimed that Akufo Addo was broke and needed money badly to pay his family whose properties he sold to finance his political campaigns in which Ken Ofori-Atta was finance committee chairman with Gabby Asare Ochere-Darko a key part.

Interestingly, after public demands for the full unedited #12 video to be shown on Television for Ghanaians to watch, the complete video footage was rather given to the Police CID boss Maame Tiwaa Addo Dankwa who was caught on tape orchestrating a cover-up so the NPP’s Danquah Faction Leader Akufo-Addo would not be embarrassed…

So it is untenable for Kweku Baako to tell Ghanaians, four (4) years on, cock and bull stories about the #12 video footage being stolen and that the portions with Charles Adu Boahen taking bribes and accusing the NPP’s Dombo Faction Leader Vice President Bawumia of being a Bribe-Taking nation wrecker who needed his large family taken care of by would be investors and paid about $200,000 to allow foreign direct investments in Ghana was only recently retrieved from some Ahmed Suale pendrives and old cameras…

Today, the crisis in the NPP has strengthened the Ashanti and Brong-Ahafo Busia Faction of the NPP who are demanding the sacking of Ken Ofori-Atta and refusing to do any Government Business unless Ken Ofori-Atta is sacked.

President John Agyekum Kufuor who is the father of the Busia Faction of the NPP is attempting to lead mediation talks while the fire is being stoked by his Chief of Staff Kojo Mpiani, openly calling for the immediate removal of Ken Ofori-Atta.

The reason the NPP MPs are refusing to use the the Parliamentary process to remove Ken Ofori-Atta, is not because it was initiated by the NDC but because their reasons are intra-party rather than nationalistic.

Either way, Ken Ofori-Atta will have to go for a forensic audit of Ghana’s finances which will uncover rot of proportions that both the Danquah and Dombo factions of the NPP together with their respective leaders, Akufo-Addo and Bawumia would be forced to leave office for fresh elections between the NDC and a Busia-faction led NPP.

Ghanaians want not only Ken Ofori-Atta out, but the entire Bawumia-led Economic Management Team and the Akufo-Addo government too.

The excruciating hardships Ghanaians are suffering has made the time between now that there is seeming peace and when there will be a Civil Uprising very limited.

President Akufo-Addo can decide to quickly save himself by immediately sacking Ken Ofori-Atta and remove Dr. Bawumia and Dr. Addison from the moribund Economic Management Team or risk inaction.

He predicted the Ghana Uprising which has since been confirmed by former Chief of Staff Kojo Mpiani and former National Security Coordinator Brigadier General Nunoo-Mensah as imminent.

Today’s drama over Ken Ofori-Atta’ Grilling in Parliament is expected to be very heated.

Today’s drama will engulf his cousin and counsel Gabby Asare Ochere-Darko when the issue of Agyaapa Royalties Deal and the PDS surface, his role in both will have him conflicted as a “Lawyer” or “Player” or accomplice of Ken Ofori-Atta in the matters at issue.

The eventual resignation or removal of Ken Ofori-Atta, Bawumia and Akufo-Addo will pave the way for Ghana’s Economy to be salvaged, the Ghana Cedi to be rescued and the hardships of Ghanaians to end.

🎼 AriseGhana Youth for your country

These are what Ghanaians are demanding, the wealth of Ghana cannot and must not be controlled by a few greedy bastards whiles the vast majority of Ghanaians suffer and die…

God Save Our Homeland Ghana and help us survive the WASTED YEARS OF THE “DANQUAH-DOMBO” AKUFO-ADDO-BAWUMIA GOVERNMENT and their DumbDogs who can’t speak truth to power because they are compromised or complicit or corrupt.