"We are not trying to be hard hearted but we want the government to feel and understand the hardships Ghanaians are going through in the hands of the NPP Government," 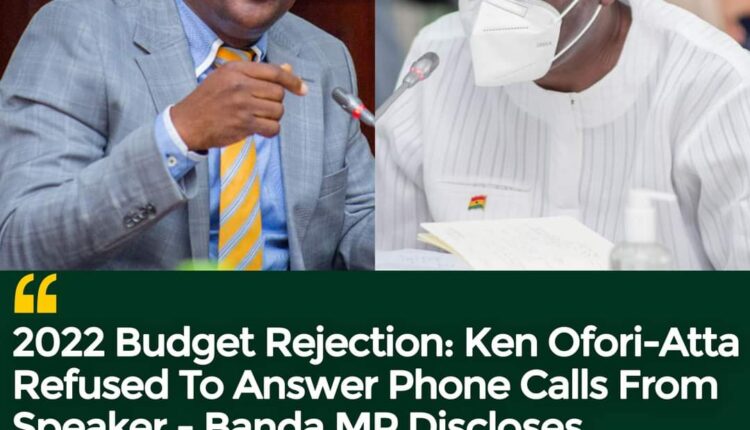 Deputy Minority Whip of Parliament, Hon. Ahmed Ibrahim, has alleged that the Minister for Finance prior to the rejection of the 2022 budget had on countless times refused to answer phone calls from the Speaker of Parliament, Alban Bagbin.

According to him, the incessant calls to the Finance Minister was for him to avail himself to parliament for further discussions in parliament on the 2022 budget.

Speaking on Okay FM’s ‘Ade Akye Abia’ programme, he explained that the minority prior to their act on Friday had through diverse effort sort to have the problems of the 2022 budget rectified but defiant Ken Ofori-Atta did not avail himself to the House.

” . . before the minority’s act last Friday, I remember very well how the Speaker called the Finance Minister on different occasions on phone just to pass some information to him for certain aspects of the budget to be corrected but Mr. Ken Ofori-Atta refused to answer those calls.

“We are not trying to be hard hearted but we want the government to feel and understand the hardships Ghanaians are going through in the hands of the NPP Government,” the Banda MP told host Kwame Nkrumah.

The Banda legislature added that they are ever ready to meet their brothers from the majority side and reach a conclusion on the 2022 budget.

“However, they should be ready to revise the 2022 budget,” he added.

The NSMQ: A Project full of Potentials