The first half of the match ended 1-0 to the away team who looked very comfortable sitting back and allowing the Reds to have the ball throughout the 45 minutes. 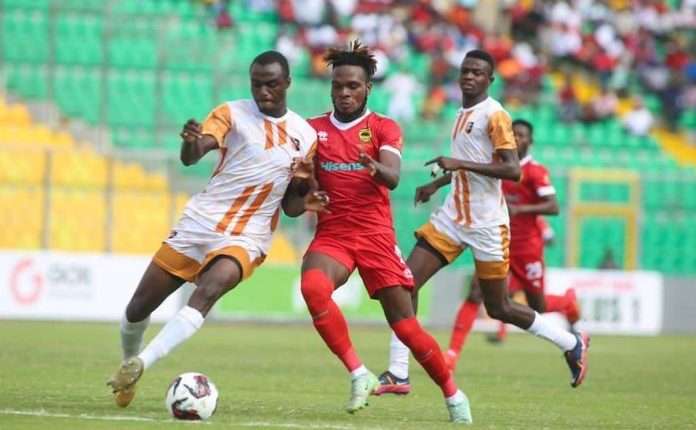 Ghana powerhouse Kumasi Asante Kotoko SC have beaten and booted out of the 2022-23 CAF Champions League at home by Burkina Faso side Racing Club de Kadiogo on Sunday afternoon.

Kotoko, despite winning the first leg against the Burkinabe club on neutral grounds in Benin failed to make it to the last round of qualifiers into the group stages of the CAF elite club competition.

After winning 1-0 on the road in the first leg of the 2022-23 CAF Champions League prelims, the Reds were expected to make it to the next round of the Champions League but failed to live up to expectations.

The Porcupine Warriors went down by a goal to the Burkina Faso outfit after just 16 minutes when Dramane Kambou struck with an intelligent free-kick to make it 1-0 to the away team.

After going down very early in the game, the hosts upped their game and started dominating possession but couldn’t really threaten the opposition goal.

The first half of the match ended 1-0 to the away team who looked very comfortable sitting back and allowing the Reds to have the ball throughout the 45 minutes.

After the break, Kotoko pushed harder and more for the equalizer but failed to score as they succumbed to a painful 1-0 loss at home.

With the defeat, the aggregate score became 1-1 and the intense game had to be settled from the penalty shoot-outs.

Kotoko missed three out of four penalty kicks and lost 3-1 to the Burkina Faso outfit to crush out of the 2022-23 CAF Champions League.

They will face their arch rivals Accra Hearts of Oak SC in their first 2022-23 BetPawa Ghana Premier League after their first two games were postponed due to the Africa campaign.

Mahama is telling lies about his emoluments – Anyidoho