Ken Ofori-Atta's indictment of the Governor of the Bank of Ghana, Dr. Addison and his shocking defence of Charles Adu Boahen as a victim of entrapment were some of the highlights of the day. 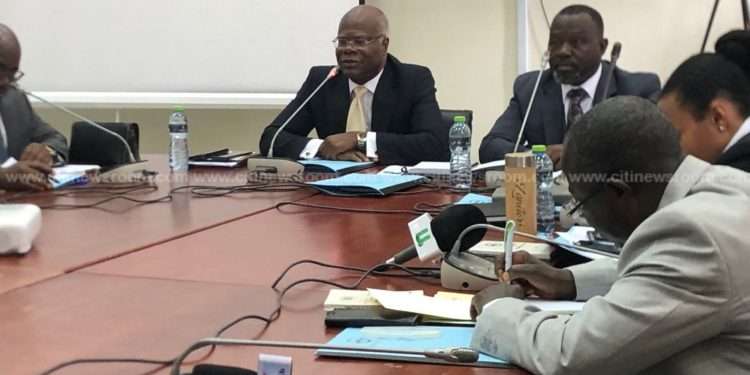 The unethical behaviour of NPP’s Co-chair KT Hammond at the Censure Committee hearing of Ken Ofori-Atta left many wondering if he was representing the Majority NPP position, or was playing games with Ghanaians who still believed that the NPP MPs had indeed been influenced on the Ken Ofori-Atta Sacking…

The NDC Co-chair Dominic Ayine, on the other hand and his team of NDC MPs were serious and asked relevant questions some of which dazed Ken Ofori-Atta who was helped by his Lawyers, the Coordinating Director of the Finance Ministry and KT Hammond.

The jocular KT Hammond whose utterances were mostly stuttering and incoherent was thrice called to order by Samuel Okujeto Abuakwa.

Nonetheless, KT Hammond was determined to help Ken Ofori-Atta off the hook by hook or by crook as though his very life depended on it.

Ghanaians deserve better than the charade of the NPP;

Ghanaians were not surprised by the presence of the Chief of Staff, Ministers and some MPs supporting Ken Ofori-Atta at the hearing which was attended by a large retinue of Akyem Abuakwa Chiefs.
Ken Ofori-Atta’s refusal to answer critical questions, his inability to confirm important figures and deliberate delay in providing information by deferral showed Incompetence, Dishonesty and even Recklessness in his conduct as Minister of Finance.

Ken Ofori-Atta’s indictment of the Governor of the Bank of Ghana, Dr. Addison and his shocking defence of Charles Adu Boahen as a victim of entrapment were some of the highlights of the day.

The need for the GNPC BOARD through Freddy Blay and Dr. K. K. Sarpong to appear before Parliament to give further and better particulars of the offshore Oil Money and directors of the subsidiary also became apparent at the Censure Committee hearing.

The biggest takeaway from the Censure Committee work so far, is that;
Whereas the NDC was serious about protecting the public purse and the removal of the Finance Minister;
The NPP was sending mixed signals about wanting Ken Ofori-Atta removed, not participating in any Government business involving Ken Ofori-Atta including the reading of the 2023 Budget and Appropriations…

Yet when there was the opportunity to use a Parliamentary process to remove Ken Ofori-Atta the NPP MPs vowed not to participate.

Instead the NPP MPs went to negotiate with the President then met with a businessman who bribed them with money to rescind their decision to have the Finance Minister sacked.

Many Ghanaians are wondering if the corrupt Bribe-Giving Businessman was the only person to have attempted bribing the NPP MPs or others had indeed succeeded in influencing them, because the actions of the NPP MPs don’t match their statements…

Ghanaians including many academics and economists like Prof. Bopkin are wondering why Ken Ofori-Atta is refusing to resign and President Akufo-Addo is refusing to sack him…

Many Ghanaians including a founding member of the NPP, Dr. Nyaho Nyaho Tamaklo believe that Ken Ofori-Atta is covering up Corruption for President Akufo Addo and his exit will expose the rot.

Ghanaians demand the immediate naming of the corrupt Bribe-Giving Businessman, his arrest and prosecution to serve as deterrent to others.

The OccupyGhana hypocrisy of writing time wasting letters to the President and the Special Prosecutor to elicit praises from Sampson Lardi Anyinenyi on Newsfile when simply naming the criminal will suffice, no longer impresses anybody.

Chairman Wuntumi and his Akonta Mining Company’s Galamsey activities remain unpunished and the Okyehene’s Galamsey Militia walk free after their shooting spree several weeks ago…
The impunity of such miscreants is because they see a lack of support for patriots like Lawyer Martin Kpebu from his friends in OccupyGhana and the CSOs Coalition who claim to care about Ghana.

It’s time to walk the talk.

The IMANIs and other talkative CSOs must join action oriented CSO like AriseGhana to push for the removal and resignations that Ghanaians are demanding.

The Police recently succeeded in stopping the AriseGhana three-day picketing at the Revolution Square opposite the Jubilee House.

The Constitutional Rights of Ghanaians to assemble, demonstrate or picket against the President and his government cannot be allowed to be trampled upon by the police.

🎼 AriseGhana Youth for your country.
When Parliament meets next week to debate the Censure Motion and vote on same, Ghanaians will expect that they put Ghana and the interest of Ghanaians above party and government.

Ghanaians must demonstrate to the Members of Parliament that they also can and will be removed if they fail to represent them.

The Constitution allows for the removal or recall of a member of Parliament by his constituents just as it allows the removal of the President.

These hitherto unused provisions of the Constitution will be explored in the coming days.

Ghanaians are suffering excruciating hardships and will not allow anyone, any MP, Minister or the President and his Vice stand in their way.

Ghanaians in the face of the worsening economic situation, may resort to the UPRISING that Akufo-Addo predicted in the studios of Peace FM on Kwame Sefa Kayi’s Kokrokoo show if all fails.
It will be recalled that former Chief of Staff Kojo Mpiani and former National Security Coordinator Brigadier General Nunoo-Mensah confirmed the likelihood of the Uprising Akufo-Addo predicted happening in Ghana soon.

Members of Parliament have the unique opportunity to avert it by living up to the expectations of Ghanaians and not the influence of corrupt businessman and the ongoing internal political party rivalry between the Danquah Faction and Busia Faction derail the quest of Ghanaians for salvation from their excruciating suffering.

God Save Our Homeland Ghana and help us survive the WASTED YEARS OF THE AKUFO-ADDO-BAWUMIA GOVERNMENT and their DumbDogs who can’t speak truth to power because they are compromised or complicit or corrupt.
#NanaMustGo
#AriseGhana
#SaveGhanaNow