The 26th Awards is slated for Saturday, November 12, at the Kempinski Gold Coast City Hotel, on the theme: “Walking the Path Towards Ghana’s Economic Recovery: The Role of the Media.” 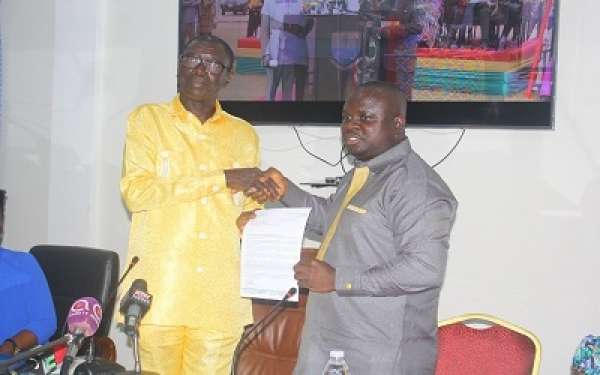 The Centre of Awareness Global Peace Mission (COA-GPM), manufacturers of COA Mixture, has pledged GH₵500,000 as sponsorship package for the 2022 Edition of the Ghana Journalists Association (GJA) Awards.

The 26th Awards is slated for Saturday, November 12, at the Kempinski Gold Coast City Hotel, on the theme: “Walking the Path Towards Ghana’s Economic Recovery: The Role of the Media.”
Professor Samuel Ato Duncan, the President General of the Mission, said the gesture was in line with his commitment to build the press in Ghana, particularly towards achieving global peace and ensuring the growth of Ghana’s economy.
“I think that it is a responsibility of the Mission to support a worthy cause of the media. Whatever you do, you are not doing it for yourselves but for mother Ghana and we work to complement the efforts of the government,” he said.
Professor Duncan made the commitment when the new National and Central Regional Executives of the GJA paid a courtesy call on him at his office at Wusorkrom near Cape Coast in the Central Region.
The delegation, led by Mr Albert Kwabena Dwumfour, GJA President, included Mrs Linda Asante Agyei, Vice President; Mr Kofi Yeboah, General Secretary; Mr David Yarboi-Tetteh, Central Regional Chairman, and Mr Kingsley Nana Boadu, Central Regional Secretary.
The visit was to officially introduce themselves, share their key vision with the organisation and request support in various endeavours to move the Association forward.
Prof Duncan reiterated his commitment to supporting the training of media personnel to strengthen the country’s democracy and propagate the message of peace.
“We want to make sure that every government succeeds. So, whatever good policy the government has, must be supported to its successful completion, ” he added.
Poor health is a major challenge confronting peace globally, hence the Mission entered into research for medicine to address that issue, he said.
Prof Duncan expressed the hope that the collaboration between the Mission and the GJA would be strengthened for their mutual benefits to ensure a peaceful world.
Mr Dwumfour, on his part, reiterated calls for a stronger collaboration between the two institutions to further train and upgrade the skills of journalists to keep up with emerging global trends.
He said professional development of journalists was key to curtailing false news and yellow journalism – sensationalistic or biased stories presented as objective truth – adding that the GJA was committed to ensuring journalists exhibited good conduct and guided by the ethics.
“We want to partner with you in various activities to build a strong business environment, peace and security because if you succeed, we succeed,” he stated.
Mr Dwumfour commended the COA-GPM President General for the massive support received by the Association and appealed to him to support the Central Regional Chapter with an office block to facilitate its work.
He observed that apart from GJA Ho, which had its own building, nearly every regional chapter of the Association did not have a permanent office, making the work difficult.
He urged the media to do all within their power as partners in national development to salvage the country’s ailing economy in connection with the theme of the impending awards ceremony.
“There is a need for us to come together to support. We have a role to play in ensuring that Ghana’s economy comes back to normalcy,” he said.
The GJA President expressed appreciation for Prof Duncan’s acceptance to be the lead sponsor of the Awards as well chair the ‘International Day to End Impunity of Crimes Against Journalists’ on November 2.
He gave the assurance that the media would reciprocate the gesture in different folds to foster better collaboration.