“The taxpayer’s money is used to pay and buy cars for the same MPs who have been rejecting the  E-levy” Mr. Kojo Arhin lamented. 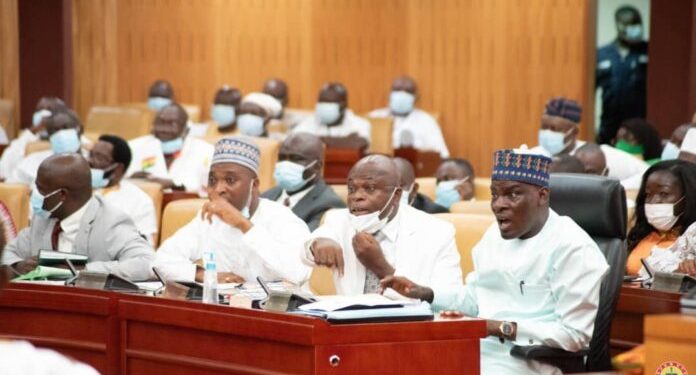 With the continuous rejection of the proposed E-levy by the Minority Group in Parliament, chairman of the governing New Patriotic Party (NPP) for the Cape Coast North constituency, Stephen Kojo Arhin, has called on the government to cancel the ex-gratia of the minority, if they refuse to accept the passage of the bill

Mr. Kojo Arhin who is popularly known in Ghana politics as Wewebi expressed disappointment at the opposition National Democratic Congress (NDC) Members in Parliament’s (MPs’) selfish interest without thinking of the development of this country and economy.

Speaking to the media at his residence, Kojo Arhin charged the Minority in Parliament to desist from politicizing the proposed E-levy, rather they should join the Majority group in parliament to pass the bill as soon as possible.

He, therefore, charged Ghanaians to hold the Minority in parliament responsible, if the country’s economy becomes unstable.

“The taxpayer’s money is used to pay and buy cars for the same MPs who have been rejecting the  E-levy” Mr. Kojo Arhin lamented.

Mr. Kojo Arhin declared that the proposed Electronic Transaction Levy (E-Levy) will not go to President Nana Addo and his Vice President, Dr. Mohammadu Bawumia’s pockets but it will be used to implement massive developmental projects without relying on loans

Mr. Kojo Arhin charged the “stubborn” Minority in Parliament to as matter of urgency accepts the E-levy to boost Ghana’s economy.

Nollywood, Bollywood, the Squid are all at the table Why aren’t we? asks Lisa Hanna of Jamaica