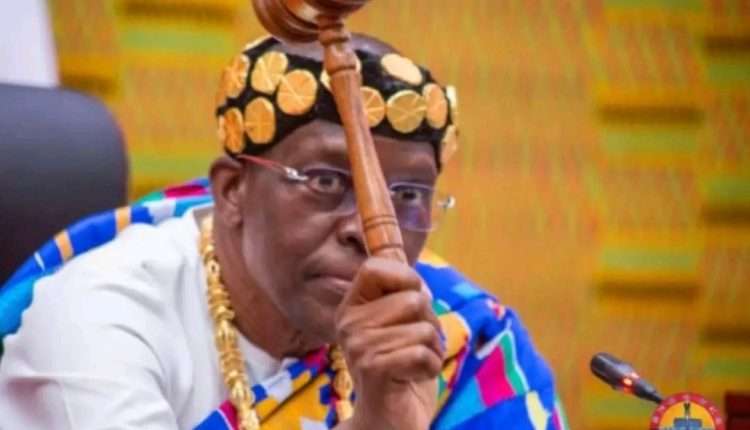 1. When the motion of censure against the Minister of Finance, Ken Ofori-Atta, was moved by the Minority Leader, Haruna Iddrisu, on Tuesday, 10 November 2022, the Deputy Majority Leader, Alex Afenyo-Markin, raised a preliminary legal objection. He founded his objection on two broad grounds:

a. That Parliament did not have jurisdiction to hear and determine some of the critical allegations founding the motion of censure against the Minister because the matters begging for determination fell within the exclusive competence of the Judiciary and the Commission on Human Rights and Administrative Justice. These were the allegations concerning unlawful use of the public purse and conflict of interest.

b. That, in the alternative, where the Speaker found that the House had the competence to hear and determine the allegations founding the motion, the process of hearing and determining the relevant issues ought to necessarily allow the Minister of Finance (and or a lawyer of his choice) to be heard in his defence.

2. At that sitting on 10 November 2022, the Speaker “straight away” dismissed the strand of the preliminary legal objection that pressed that Parliament did not have the jurisdiction to hear and determine some of the allegations founding the motion for a vote of censure. He made it clear at that sitting that he would provide the reasons for his decision later. The grounds were supplied at today’s sitting. I will summarise them later.

3. The Speaker, however, referred the motion to a bi-partisan Adhoc committee he had formed to hear the allegations against the Minister, hear his responses to the claims and then return with a report to the House. The said referral drew a firestorm of criticisms from some MPs and members or the public. Others defended the Speaker’s decision. The committee did as directed and submitted its report, which report is being debated in the House presently.

4. Before the commencement of debate on the report today, the Speaker read a statement to the House, which statement supplied the full scope of the reasons for his partial dismissal of Afenyo-Markin’s preliminary legal objection.

5. In summary, the Speaker ruled that the character of the first strand of the Deputy Majority Leader’s objection sought to invite him to interpret the Constitution, a role exclusively reserved for the Supreme Court. He, therefore, declined the invitation to encroach on the province of the nation’s apex court but maintained that the law allowed him to “apply” the Constitution. He also explained that contrary to Afenyo-Markin’s argument, a motion for a vote of censure is not the same as a criminal trial. However, it invokes a quasi-judicial process. As such, the House could hear and determine the motion’s allegations.

6. Regarding the second layer of the objection, the Speaker – not in as many words – ‘upheld’ the concerns of the Deputy Majority Leader. He took the view that there was a lacuna in the provision governing a vote of censure against a Minister (particularly regarding the process to adopt to ensure that the Minister is heard in his defence).

7. As the Speaker explained, “Such a provision is absent in the proceedings of a vote of censure on a Minister of State. Both the Constitution and the Standing Orders of Parliament do not provide for such an elaborate procedure. The Constitution and the Standing Orders simply say in Article 82 (4) that “a Minister … is entitled, during the debate, to be heard in his defence”, and Order 108 say, “during the proceedings on the motion, the Minister shall be heard in his defence.”

8. He continued, “[I]t is my humble view that in such a situation, I am called upon as the Speaker, to perform my duty to provide for such a rule or procedure not provided for. In accordance with Order 6 of the Standing Orders of the House; “6. In all cases not provided for in these Orders, Mr. Speaker shall make provisions as he deems fit.”

9. In effect, the Speaker took the view that the Constitutional requirement of a fair hearing would not have been satisfied if the Motion was not referred to an Adhoc Committee for the Minister to appear before the members, hear the exact claims against him and mount an appropriate defence. The reason seems to be that the nature and form of plenary sittings of the House do not allow for the kind of ‘inquisitorial’ hearing that would have allowed the Minister to appear with a lawyer of his choice to be heard in his defence.

10. To conclude, he said: “The information I have shared with you and the public leaves me in no doubt whatsoever that the procedure adopted by the referral of the matter to the ad hoc Committee for inquiry is well rooted in law. I am convinced that the public hearing conducted by the Committee has vindicated my decision and allayed the fears of all those who had thought otherwise. Fortified by this conviction, I rule that the referral of the motion to pass a resolution on a vote of censure on the Minister of Finance to an ad hoc Committee for inquiry is proper and in accordance with the law. Hon members, [The] House may now… debate the motion.”

Comment: The Speaker’s reasoning is sound and sets the right precedent for Parliamentary practice and procedure. It is founded, in my respectful view, on the requisite dose of relevant Constitutional law, common sense and activism.

NB: Under Article 82 of the Constitution, a vote of censure against a Minister of State fails where it is unsupported by the votes of at least 2/3rds of all MPs. This means at least 184 MPs. Thus, given that all Majority MPs (138) walked out of the chamber just before the House could take a vote on the motion, it is safe to say that even if all the Minority MPs (137) vote for the motion, it will fail.

We must collaborate in development of XR for immense benefit – Minister