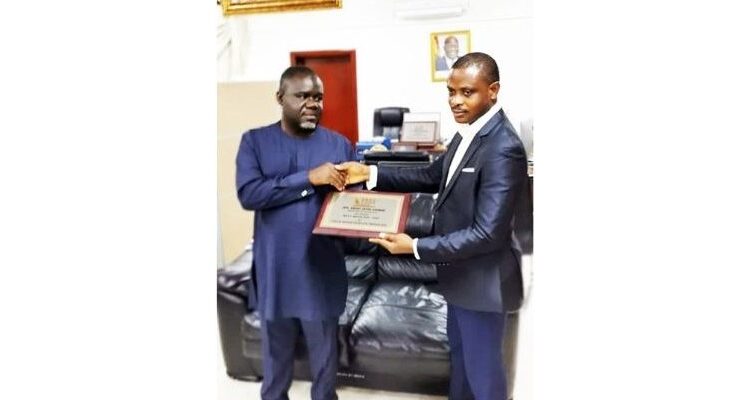 Three ministers jointly adjudged best ministers in the FAKS Investigative Services ‘Performance of Ministers’ survey, 2021, have been presented with their awards.

A nicely designed plaque with their names boldly written on it were presented to them by the Chief Executive Officer (CEO) of FAKS Investigative Services, Fred Yaw Sarpong, in their respective offices in Accra on different occasions.

The Transport Minister, Asiamah, received his award on Tuesday, April 18, 2022. It is the second time he has emerged overall best Minister in the FAKS Investigative Services Performance of Ministers survey, with the first being 2020.

The three ministers jointly scored 92% to claim the topmost position after 3,661 out of 3,953 respondents gave a yes vote for their outstanding performance during the year under review.

For instance, Kwaku Asiamah was highly acknowledged for his Ministry’s intervention during the commercial drivers’ strike as well as the massive transformation he has brought to the transport sector.

Godfred Yeboah Dame was also highly acknowledged for the role he played in the admission of 499 law students into the Ghana School of Law, Ghana winning the Norway Chancery case and also helping to transform the Registrar General’s Department.

Dr. Yaw Adutwum on the other hand, was greatly acknowledged for the introduction of the No Guarantor Tertiary Students Loan policy as well as that of Science, Technology, Engineering and Mathematics (STEM) by his Ministry.

Commenting on the award, Kwaku Kwaku Asiamah said he is inspired by the public’s acknowledgment of his work, pledging to collaborate with stakeholders in the transport industry to initiate more programs and policies that will impact positively on the lives of the people.

“I am highly motivated for receiving this award. In fact, it has spurred me on to work more to ensure safety on our roads and on the Volta Lake. The human life is critical that we need to look at how we develop the Volta Lake Transport to make it safer for our people. Safety on the Volta Lake is so cardinal at the heart of President Nana Addo Dankwa Akufo-Addo that he has secured a US$148million loan facility which has received Cabinet approval to transform the Volta Lake Transport. This, I will ensure that it is done within the scheduled time to bring relief to our people once Parliament also approves it,” he noted.

The CEO of FAKS Investigative Services, Fred Sarpong, also commenting on the awards, said the survey is an indication that the public is monitoring whatever the ministers, deputy ministers, and CEOs of state institutions are doing, cautioning all government appointees to justify the confidence reposed in them by the President.

“The survey is enough to tell us that the people are watching and so the ministers should be very careful in whatever they do in their respective positions,” he noted.

The survey was conducted from October to December 2021, and had journalists, students, traders in general, traditional rulers, teacher, business owners, Civil Society Organisations, drivers, academia among others as its respondents.

Journalists urged to build more collaborations with the Army