A total of 141 entries were submitted by Middle East-based agencies and in-house communications departments, signalling the Arabic communications importance and impact to the industry. 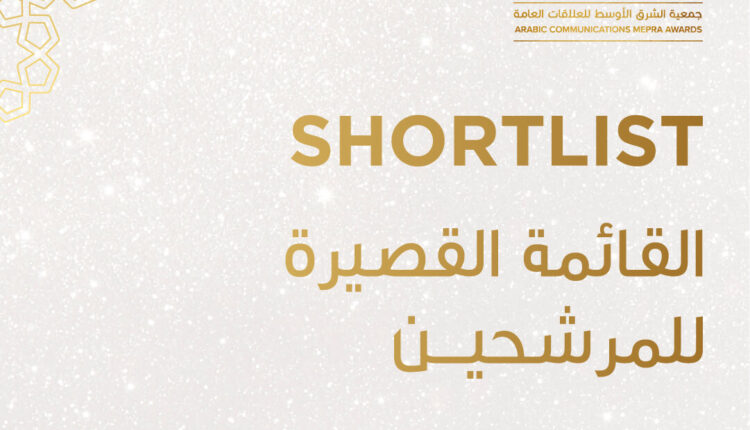 A total of 141 entries were submitted by Middle East-based agencies and in-house communications departments, signalling the Arabic communications importance and impact to the industry.

Making its long-awaited debut in the MEPRA awards scheme, the Arabic Communications awards was off to a remarkable start as agencies and in-house communications teams submitted their best works for a chance to win in various categories.

The inaugural winners will be revealed during the much-awaited gala night on June 30, 2022 at Rosewood Hotel, Abu Dhabi. Leading the nominations tally for the first-ever Arabic communications awards were Weber Shandwick with a total of 14 nominations in total, with Mastercard Empowering Every Business campaign being nominated for 5 categories.

Other notable categories that were hotly contested include Best Campaign Middle East and Best Campaign UAE, with a combined 20 nominations.

The Arabic MEPRA Awards included 24 categories with a special focus on the most notable work produced in response to COVID-19. All eligible entries were required to focus on Arabic-centred campaigns to qualify. Additionally, the outputs must have been published or delivered in Arabic and all written entries must be submitted in Arabic.

The entries were assessed by a panel of local and regional Arabic-speaking industry experts, with an independent adjudicator reviewing the entire judging process.

Togo will soon have an entity that will ensure the effective…

Mirova announces the acquisition of SunFunder

Shortlisted entries were limited to 8 per category and for categories, which received a larger collection of entries, only the top 11 were shortlisted, regardless of whether the submission reached over the 70% scoring threshold.

“We are proud to announce the first finalist of the inaugural Arab Communications awards – a milestone that marks the growth of MEPRA as an organization and the entire Middle East PR industry. On behalf of the judging panel, it’s been a pleasure to review the entries that were submitted. We reviewed over 140 entries, all of which were proof of how Arabic communications is being used to ignite meaningful conversations through impactful campaigns,” said Taryam.

The premier Awards programme was developed to shine a spotlight on impactful Arabic content and highlight the importance of the Arabic language in the communications industry within the Middle East. This, according to MEPRA is in line with its goal to achieve its vision of being the unique voice that represents the public relations and communication profession in the Middle East and its mission to raise awareness and build a holistic understanding of public relations in the region.

GOT A STORY? Share with us. Email: [email protected] or [email protected] WhatsApp: +233(0)244822034
Arabic communicationsfinalistsIndustryMEPRA Awards 2022Middle East
0
Share FacebookTwitterWhatsAppTelegram
Subscribe to our newsletter
Sign up here to get the latest news delivered directly to your inbox.
You can unsubscribe at any time

Plastic Punch, UNDP, and EU collaborate to mark 2022 World Ocean Day in Accra – urging citizens to take action to save the oceans from plastic pollution

Mirova announces the acquisition of SunFunder