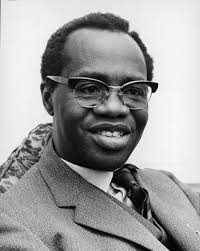 Abraham Lincoln who was the 16th American president said “a nation that does not honour it’s heroes will not long endure”. This has prompted me to cast a glance on the historical archives of our dear nation (Ghana) and I find out that Prof. Kofi Abrefa Busia cannot be left uncelebrated.

He started his basic education at the Wenchi Methodist school, then continued at Mfantsipim school. He was then educated at the Wesley College of Education in Kumasi from 1931_1932 and taught at the same Institution from 1932-1935.

Then in 1935, he left Wesco and went to study at the Achimota college, he subsequently taught there.
He got his maiden degree with honours on medieval and modern history from the University of London. He again attended Oxford University college where he was the first and the only African student there. He had a bachelor of arts degree in Philosophy, Politics and Economics in 1941, he had the Master of Arts in the above areas of studies in 1946 and a PhD in social anthropology in 1947 at the Nuffield College in Oxford.

Busia returned to the Gold Coast in 1942 and he alongside Mr. Amishadai Larson Adu was the first Africans to be appointed as assistant district commissioners in the British Colonial administration. He occupied this position from 1942_1949. He was the first African Lecturer at the University college of Gold Coast now the University of Ghana (Legon) .

His experience with the Colonial administrators, his in_depth knowledge in politics and history as well as his association with staunch nationalists like J.B Danquah, Fred Grant etc. activated his political exuberance which made him to become patriotically enthusiastic.
After the United Gold Coast Convention (UGCC) performed abysmally in the 1951 general elections, Busia founded the African Congress Party (ACP) in 1952 together with some disgruntled Ashantis like Victor Owusu, Reginald Reynolds Amponsah, B.F Kusi, Joe Appiah etc. who felt being ethnically discriminated by the Nkrumah’s CPP.

In 1954, He joined the ACP with the Ashanti based political party called National Liberation Movement founded by Okyeame Baffour Osei Akoto in 1954 and Busia became the party’s leader in the 1954 elections. It was only a parliamentary elections and Busia won the Wenchi seat.

He again won the Wenchi seat in the 1956 elections, Dr. Busia after this election allianced the NLM with Duori Naa Simeon Diedon Dombo’s led Notherners People’s Party (NPP) and he became the opposition leader in parliament at the concession of Dombo who’s party had 13 seats as against 12 seats of the NLM.

On 31st December 1957, when Dr. Kwame Nkrumah passed the “avoidance of discrimination act”, many political parties were affected including the National Liberation Movement, Northerners People’s Party, Anlo Youth Movement, “Gamoshefemokpe”, Muslims Association Party etc. thereafter Dr. Busia coalesced all of these parties and they together founded the United Party (UP) in 1958.

After the Kulungugu bombing incident in 1958, Dr. Nkrumah ironed his hands on the country by tightening the security agencies and severely censured the media. Also, it was perceived that every political activist and dissident was an enemy to the government and the state. This culminated to unnecessary witch-hunting and unjustifiable persecutions against the opposition members. Dr. K. A Busia been an opposition leader and a bitter critic of the Kwame Nkrumah’s despotic, nepotic and dictatorial leadership suffered above mere verbal abuse and persecution. This led him to seek assylum in the oversees in 1959. During this period, he taught sociology and African Culture at the University of Leiden in the Netherlands.
In March 1966, a month after Nkrumah’s government was ousted by the Military_Police combination led National Liberation Council (NLC), Busia returned to Ghana.

In 1969, when the ban on politics was lifted by the NLC, Busia together with notable personalities like Williams Ofori Atta, Edward Akuffo Addo, S.D Dombo etc on 2nd May 1969 unveiled the Progress Party (PP) in place of the United Party (UP) founded earlier. The PP won 105 seats out of the 140 seats contested in the 1969 elections. The elections were held on 29th August 1969.

The second republican Constitution also favoured parliamentary system of government and so Busia won the Wenchi seat as a member of parliament and was sworn in as the prime minister of Ghana on 1st October, 1969.

Under the leadership of Busia, rural development was given the outmost priority. Busia established the ministry of rural development and initiated the rural electrification project aimed at providing all villages with electricity. Busia introduced an open free market economy, privatization of industries and a liberal democratic principles.

In foreign relations, Busia favoured the western and American policies.
Some of the policies of Busia were not properly implemented and thus became unpopular to the people which led to discontentment among the masses.

Example of these policies were the Aliens Compliance Order, the dismissal of some 561 public servants, the devaluation of the cedi, the dismissal of the chief editor of the daily graphic the dismissal of some judges who were involved in the Sallah vrs the State case and the controversial among all was his approaching positive steps towards the apartheid_South Africa which demeaned Ghana’s integrity as the leading champion of blacks emancipation and the shinning hope for Pan Africanism.

HIS OUSTING AND FINAL LIFE

Busia went for a check up in London and soon his government was overthrown by the National Redemption Council ( NRC) led by Col. Ignatius Kutu Acheampong on 13th January, 1972.

Dr. K. A Busia afterwards led an honourable life in the UK. He suffered heart attack and on 28th August, 1978, Professor Dr. Kofi Abrefa Busia died peacefully in London.
He was buried in Wenchi.
He married Naa Morkor and he had 8 children.

When we talk of Busia, we are talking about patriotism.

When we remember Busia, we are remembering a struggle and a triumph.
When we say Busia, we mean the underrated hero.