Former CMB boss gets traditional title for his contribution to development

Nana Yaboaa Pene II, the Queen-mother of Chiraa who took him through traditional rites said she was hopeful that Nana Akantoa I would use his “connections” home and abroad to facilitate the development of Chiraa in particular, and the Dormaa Traditional Area by extension. 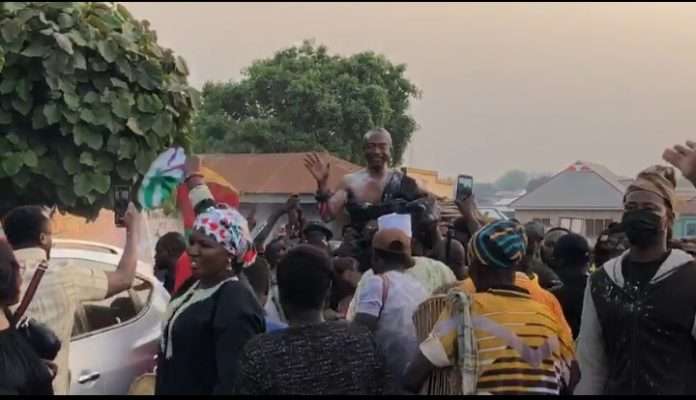 Mr. Bennet Ankantoa, 61, a former Chief Executive Officer of the Cocoa Marketing Board (CMB) has been enstooled as the Amankorahene (development chief) of the Chiraa Divisional Council in the Dormaa Traditional Area, under the stool name Nana Kofi Ankantoa I.

Nana Yaboaa Pene II, the Queen-mother of Chiraa who took him through traditional rites said she was hopeful that Nana Akantoa I would use his “connections” home and abroad to facilitate the development of Chiraa in particular, and the Dormaa Traditional Area by extension.

Barima Minta Afari II, the Chief of Chiraa in the Sunyani West Municipality, also the Benkumhene of the Dormaa Traditional Area said the chiefs and people of the town appreciated the immense contributions of the new chief hence his installation.

He said the enstoolment of the new chief would not only inspire others home and abroad to contribute their widow’s mite towards the development of the town, but also motivate him to do more and help meet the development needs of the area.

Later in an interview, Nana Akantoa I expressed appreciation to the chiefs and people of the Chiraa and the Dormaa Traditional Area for the honour, and assured to work hard to attract investors to the area.

He said development remained a shared and collective responsibility, and appealed to wealthy people in the area to support the poor and also contribute to the progress of the town.

Nana Akantoa I stressed that education was not only the bedrock of national development, but a prerequisite for individual’s development, and called on parents to invest much of their resources into the education of their children.

He therefore advised students in the area to concentrate on their books, and avoid unhealthy behaviour that could truncate their education and ruin their future.

GOT A STORY? Share with us. Email: [email protected] or [email protected] WhatsApp: +233(0)244822034
AmankoraheneCocoa Marketing Board (CMB)EnstooledNana Kofi Ankantoa I
0
Share FacebookTwitterWhatsAppTelegram