Gabby is deeply involved informally in most government business including appointments and is considered to be the de-facto Prime Minister of the moribund Akufo-Addo government and head of the Kyebi-Akyem Mafia Kitchen Cabinet of Akufo-Addo. 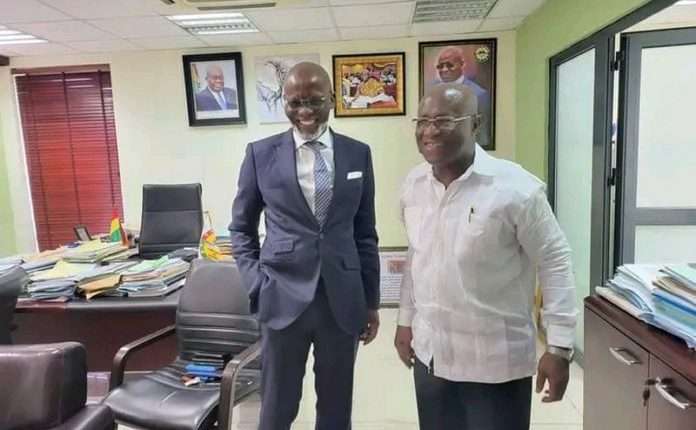 Gabby Asare Ochere-Darko and Asante Bediatuo once undermined the Asantehene, whose public anger saw Akufo-Addo fly to Manhyia to beg for his nephew and cousin.

Gabby after being bashed by Okujeto Abuakwa during the Parliament Censure Committee for his condescending attitude took his weight-throwing attitude to the Majority Leader.

Osei Kyei-Mensa-Bonsu also chose a Kumasi based radio station to return fire, asking who Gabby Asare Ochere-Darko thinks he is, as he has no locus in both the government and the NPP…

Gabby today, went with his tail between his legs led by the Western Regional Minister to beg the Majority Leader for Forgiveness…

Gabby is deeply involved informally in most government business including appointments and is considered to be the de-facto Prime Minister of the moribund Akufo-Addo government and head of the Kyebi-Akyem Mafia Kitchen Cabinet of Akufo-Addo.

He was allegedly a central part of many scandals under Akufo-Addo;

1. Gabby was in meetings leading to the Franklin Templeton $2.25billion Bond Deal, held on the blindside of then Attorney General Gloria Akufo.

2. Gabby recommended his neighbour, who is the personal Barber of the President to the scandalous PDS which is still illegally holding on to prepaid money of Ghanaians consumers.

3. Gabby was the head of the team of lawyers who crafted the scandalous Agyaapa Royalties Deal involving Ken Ofori-Atta, Charles Adu Boahen and also appointed by sole sourcing his classmate who is the son of Yaw Osafo Maafo as CEO without the possibility of revocation of the appointment.

4. Gabby was involved in the sole sourcing of the Gay-LGBTQI advocate David Adjaye as architect of the National Cathedral, Marine Drive Project and the Trade Fair Redevelopment Project…

5. Gabby is credited with the irregular appointment of Dr. Agnes Adu as CEO of the Ghana Trade Fair Company [a candidate for jail] and deeply involved in the Trade Fair Redevelopment Project.

The Trade Fair Redevelopment Project has been illegally taken from a wholly Ghanaian owned company which won an international Competitive Tender and handed to a sole sourced foreign company.

Gabby’s Danquah Institute has captured the mouth of the NPP and the National Security apparatus with its former employees in charge of these key sectors.

Gabby mimics Ken Ofori-Atta’s capture of the Finance Ministry and the entire Financial sector including Fund Management through the Securities and Exchange Commission using Databank staff; while Enterprise Insurance has taken over the State Insurance and Pensions sectors.

The suffocating hands of the Akufo-Addo Akyem Mafia who were once accused by Kennedy Agyepong of collecting Presidential Gate Fees, will soon be taken off Ghana’s neck so Ghana can breath again.

A forensic investigation of the Akyem Mafia will show why Ghana is Broke and Debt Distressed, Ghanaians are suffering, the economy collapsed, inflation at all time high and the free-falling Cedi now the worst currency in the world.

The arrests and prosecutions that are anticipated to follow the exit of Ken Ofori-Atta and Akufo-Addo will bring back investor confidence in Ghana and the economy will bounce back.