The suspects have since been moved to the Eastern Regional Police Command. 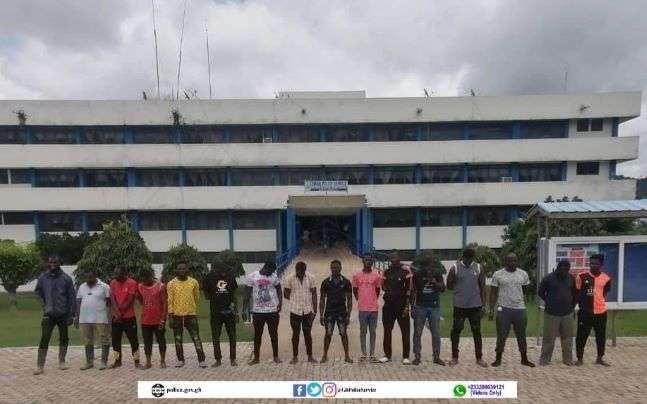 The Police have arrested 16 persons in connection with a shooting incident at Asaman Tamfoe in the Atewa East District of the Eastern Region.

The suspects have since been moved to the Eastern Regional Police Command.

A statement signed by Police Superintendent Ebenezer Tetteh of the Public Affairs, Eastern Region, said the incident occurred between some persons believed to be illegal miners and a community anti-galamsey taskforce on September 29, 2022.

The statement said efforts are underway to arrest the remaining suspects and retrieve any other weapons in their possession.

It said Police had also seen a viral video on the incident which was being reviewed as part of the investigation.

Police assured the public that all other perpetrators will be arrested and brought to face justice.

A disturbing video of some men wielding guns and exchanging shots surfaced on social media.

The video captured a free-for-all Rambo-style broad-daylight shooting incident at Asaman Tamfoe in the Eastern Region on Thursday, 29 September 2022.

Heavily armed gunmen could be seen in a viral video yelling instructions and firing at a parked SUV with their assault rifles and pistols.

Although the details of what led to the scary shooting are unknown, men wielding firearms could be seen in the video shooting at some individuals.

The police assured the community of a thorough investigation into the shooting incident.