Receiving the award, Mr Koranteng thanked the President of the Ghana Morocco Old Students Association, Peter Panyin Anamang, the executives of GHAMOSA and the event organisers for recognising his effort and contribution to Journalism and the association. 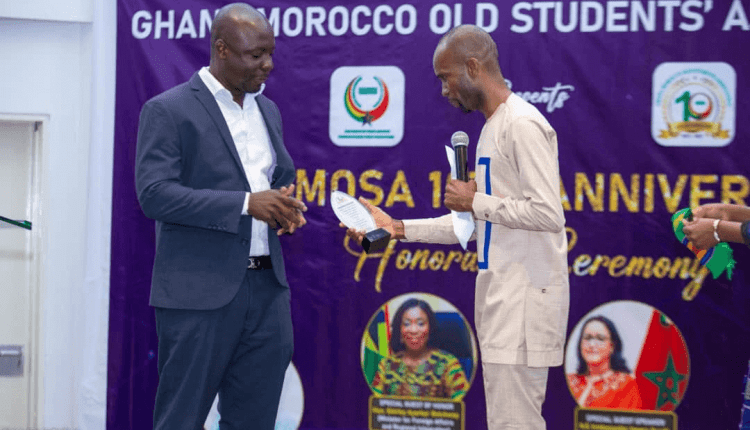 At its 10th Anniversary celebration, the Associating added Adu Koranteng to a list of special guests and diplomats that were listed for awards for their meritorious service aimed at promoting diplomatic relationship between Ghana and Morocco.

Adu  Koranteng was awarded with a plaque  that reads “In appreciation of your outstanding commitment, invaluable service  and enormous  support to our Association that helped in leading our path to success. You are being honoured with much appreciation and gratitude Mr Kwabena Adu Koranteng, News Editor of the New Crusading Guide”.

Receiving the award, Mr Koranteng thanked the President of the Ghana Morocco Old Students Association, Peter Panyin Anamang, the executives of GHAMOSA and the event organisers for recognising his effort and contribution to Journalism and the association. He appreciated their sense of recognition and expressed gratitude to them. He promised to do more to promote quality journalism in Ghana, the growth of the association and the good relationship between Ghana and Morocco.

In a statement, The Moroccan Ambassador to Ghana, His Excellency, Imane Ouadil, said there has been an increase in student mobility from African countries as a result of the good cooperation agreements.

“Currently, Morocco hosts more than 18,000 students from 47 African countries, enrolled in different Moroccan higher education public institutions such as the faculties of Medicine and pharmacy, Dentistry , science and technology, engineering sciences, commerce and management technology and translation,” She stated.

Ambassador Imane Ouadil noted that the influx of foreign students has been in the order of 4, 000 new students each year where Africans represent 63% of all entrants with the assumption of 95% as scholarship holders of the Moroccan government.

“To underscore Morocco’s commitment to Africa and its youth, I quote King Mohamed VI ‘S speech from 29th African Union Summit in 2017 when Morocco re-joined its institutional African Family. His Majesty said “the future of Africa depends on its youth; Africa’s young population underlines the urgency of orienting the demographic dividend towards the emergence of the continent. Africa, therefore has an unexpected opportunity to benefit from a young , educated and abundant workforce to fuel its economic growth”.

“Indeed Africa cannot be seen as a mere pool of opportunities. Africa needs to create and seize its own opportunities and generate its own wealth. I commend you, beneficiaries of Morocco government’s scholarship for stepping out of your comfort zone and moving to a new different country for years. While I hope the majority of your experience was enriching and exciting. I imagine there were also challenging days that made you nostalgic for home, for the nice Ghanaian dishes, yet you persevered. And when you returned to Ghana, you applied your experience in your respective fields to give back to your communities to make a difference,” she said .

He said over the last decade, the Association has undertaken a number of impactful activities which include Educational Conferences, Business Exhibition and Networking forums, Sports and Networking Festivals and many others. These activities he said were to further strengthen the already existing bond between Ghana and Morocco.

The10th Anniversary was celebrated with an Honorary Ceremony which was organized on Friday 11th November, 2022 under the theme ‘’Building together the Africa we want, our sacred legacy’’. The ceremony which was funded by the association was designed to gratefully appreciate King Mohammed VI, Former President John Kufuor, former Ghana Ambassadors to Morocco, other personalities and institutions for their enormous support, contribution, decent leadership performance and invaluable service towards a worthy course very needed to further strengthen the Ghana – Morocco relations and to the success of our studies in Morocco.