The Alliance said the need to provide critical evidence to advance efforts towards the adoption of the National Alcohol Regulations, and further provide an appreciation for the impacts of alcohol on the entire ecosystem of Ghana, among others is what necessitated the for the report. 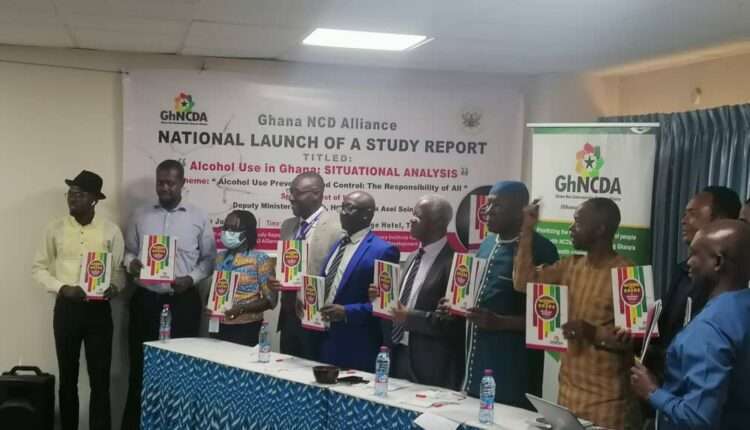 A Study Report on Alcohol use in Ghana dubbed “Alcohol Use in Ghana: A Situational Analysis” has been launched in Accra. It was commissioned by Ghana Nono-Communicable Disease Alliance (GhNCDA) and its partners.

The Alliance said the need to provide critical evidence to advance efforts towards the adoption of the National Alcohol Regulations, and further provide an appreciation for the impacts of alcohol on the entire ecosystem of Ghana, among others is what necessitated the for the report.

WHO’s Global status report on Alcohol and Health published in 2018, indicates that alcohol consumption has caused the death of some 3 million people across the world and rendering about 132 million others with various forms of disabilities. Among others it revealed that the death rate from alcohol consumption is higher than that of diseases such as tuberculosis, HIV/AIDS, and diabetes.

At the launching ceremony in Accra, a Deputy Minister for Health, Mahama Asei Seini, lamented the significant threat of alcohol consumption to Ghana’s health system and the country’s economy. He said Ghana is losing productive labour due to alcohol-related deaths and morbidity.

He admitted that it will be difficult to combat alcohol-related problems in Ghana but said with a concerted effort from all stakeholders it is possible.

Currently, Ghana has made some strides in the fight against alcohol following the development of a National Alcohol Policy and the enforcement of watershed legislation for alcohol advertising. These also include placing a ban on celebrities from taking part in advertising alcohol or its related products.

Hon. Asei Seini emphasized the need for tailor-made interventions to regulate the informal sector as well as operators of pubs and drinking spots.

“Let us make use of the evidence provided in this research not only as a basis for planning and implementing our interventions but also in advocacy drives,” he stated while commending the GhNCDA for the research.

Assistant Commissioner of Research & Policy at the Ghana Revenue Authority (GRA), Dr. Alex Moyem Kombat in his statement on behalf of the Commissioner-General said they are aware of the harms that alcohol consumption causes to humans which is why it has been made a taxable item so as to control its consumption.

“Generally, the excise tax on Alcohol aims at changing the behavior of consumers towards the demand of the product thereby reducing consumption. That is through price signals, the excise tax is able to change the behaviour of consumers and importers of the product towards consumption and importation of alcoholic products and help raise additional revenue for the national treasury,” he stated.

He said the GRA will continue to fortify its borders through patrols to check smuggling of the alcoholic products into the country.

In addition, there is confiscation of illicit alcoholic products and the use of other scientific methods to check illicit trade of the products.

“GRA, therefore, finds this National launch of the Study Report on Alcohol Use in Ghana: A situational Analysis very important as it will create awareness in the country that can assist all relevant actors in this fight,” he stated.

National Coordinator of the GhNCDA, Labram Massawudu Musah in his address noted that the study was prompted by the need to give provide evidence to support attempts to implement the National Alcohol Regulations, as well as an understanding of the impact of alcohol on Ghana’s overall ecosystem.