Ghana's inability to mine bauxite in the Atiwa Forest and process into finished products to be sold and money deposited in an escrow account will be the trigger for the Chinese government to takeover yet another bankrupt African Country for free. 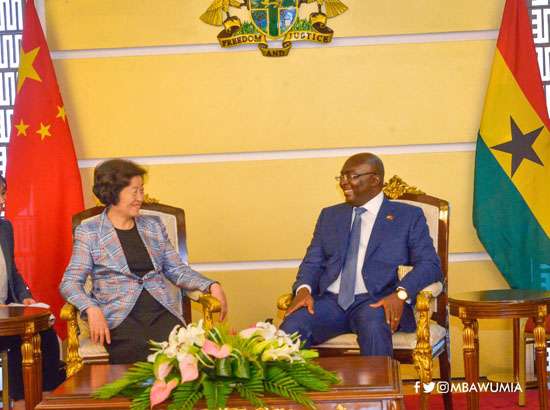 After Ghana starts defaulting following the restructuring of its Loans and Debts, the nightmares will begin.

It won’t matter that Aisha Huang is Chinese or that Chinese Galamseyers destroyed Ghana’s Cocoa farms, Forests, Rivers and Water Bodies at the same time as China started exporting Cocoa and Ghana’s premium Cocoa couldn’t find buyers because it was contaminated by Galamsey activities.

Ghana’s inability to mine bauxite in the Atiwa Forest and process into finished products to be sold and money deposited in an escrow account will be the trigger for the Chinese government to takeover yet another bankrupt African Country for free.

Ghanaians were warned by Hon. Ato Forson and Hon. Isaac Adongo years ago, finally Ghana’s worst nightmare is unfolding in real time thanks to Akufo-Addo, Bawumia, Ken Ofori-Atta and their reckless, incompetent and corrupt government.

Vice President Dr. Mahamudu Bawumia has expressed optimism over a 15 Billion Dollars funding partnership agreement and commitment reached between the Government of Ghana and the Government of the Peoples Republic of China.

The funding partnership with China, the Vice President explains, is not based on the traditional model of borrowing and Aid.

The Vice President disclosed this when he addressed a press conference at the VIP Lounge at the Golden Jubilee Terminal upon arrival from China after leading a high powered government delegation on a four day official visit.

The Vice President added that the Chinese government has welcomed Ghana’s proposed financing model and has committed 15 Billion dollars to support the several projects that government intends to undertake.

A further 4 billion dollars partnership agreement will also be signed in due course after a few negotiations are concluded in a month’s time the Vice President added.

Vice President announced that the China National Building Materials and Equipment Import and Export Cooperation signed a facility with representatives of Ghana’s Private Sector led by officials of the Association of Ghana Industries (AGI) which will see the Corporation offering direct financial support and material support for the one district one factory policy of government.

The Vice President additionally announced the renegotiation and reactivation of the China Development Bank 3 billion dollars loan agreement reached earlier by the Mahama Administration. Some one billion was released for the construction of Atuabo Gas Plant, however the remaining 2 billion was frozen due to some concerns the Chinese had with the Previous administration.

The Vice President confirmed that the concerns of the Bank has been addressed and the country will soon receive the remaining 2 Billion Dollars.

Dr. Bawumia indicated that the China Railway International Group has also signed a Memorandum of Understanding (MOU) with government to commit 10 billion dollars to the railway infrastructure development agenda of government.

The President in the rundown to election 2016 promised to revive rail transportation in Ghana and the said agreement the Vice President believes would help greatly to develop the railway industry in Ghana. Construction of 90 Bridges As part of proposals presented to the Chinese government during the visit, the construction of some 90 bridges across cities, towns and villages of the country was discussed. The Chinese government has agreed to constructed all 90 bridges  and the first interchange at point 7, an area in Tamale in the Northern Region.

IF GHANA DEFAULTS: Ghanaians will regret…