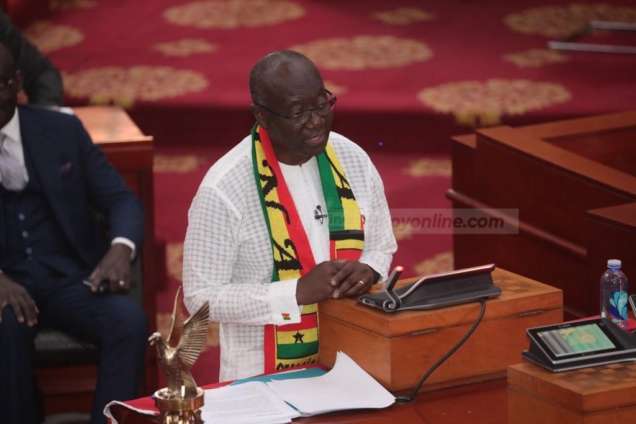 Embattled Minister of Finance, Ken-Ofori Atta, on Thursday, November 24, 2022 appeared in Parliament to present the 2023 Budget Statement and Economic Policy of the government on behalf of President Nana Addo Dankwa Akufo-Addo.

The presentation ceremony coincided with Ghana Black Stars’ opening match against Portugal in the ongoing World Cup tournament taking place Qatar. Subsequently, the hullabaloo that characterized his presentation was swallowed by the euphoria of the football match. In parliament itself MPs were seen claded the colors of the National Flag, with the Speaker himself the fugu in Red, Gold and Green colours.

However, the pump and pageantry that often characterizes the reading of the Budget statements annually were completely missing this time round. The Finance Minister entered quietly into the chamber, almost unnoticed. Unlike before he would have entered the premises of Parliament in a convoy and escorted into the Chamber by some of his colleague Ministers, and in some cases the Vice President Dr Mahamudu Bawumia.

His almost 9 minutes long presentation was greeted with quietude on both sides of the House, especially from the Majority side that seemed almost unenthused about the presentation.

It was the Minority who occasionally shouted “eei, eei” whenever he mentioned “Russia-Ukrain” in his presentation.

It will be remembered that the Majority had threatened boycotting the Budget reading process this week.

Presentation of Budget Statements in Parliament have over the years been witnessed by people from all walks of life, including chiefs, diplomats, the security services, among others. As such, the public gallery and even the press gallery are not only filled to capacity, but also over flow with people. This time round however, the public and press galleries were conspicuously under stuffed.

Hymns In Worship 2022: One Voice Choir Ghana to thrill audience on Dec. 3