Hajia Azara Amadu, the Northern Regional Nutrition Officer, who made a presentation on the regional nutrition situation during the engagement, held in Tamale, underscored the importance of exclusive breastfeeding to the health and wellbeing of children. 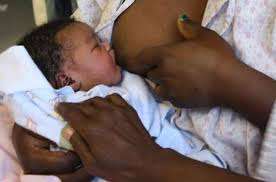 The Nutrition Unit of the Northern Regional Health Directorate in Tamale has engaged media practitioners to step up public sensitisation on exclusive breastfeeding in the region.

It was also to promote nutrition reporting, especially for the well-being of children, to ensure a healthy population.

The Multiple Indicator Cluster Survey (MICS) 2017 showed that nationally, exclusive breastfeeding declined from 46 per cent in 2011 to 43 per cent in 2017 on the average, with the Northern Region standing at 63.6 per cent.

This was blamed for the high stunting rate of 28.8 per cent and wasting rate of 9.1 per cent, recorded in the region as part of the MICS.

Hajia Azara Amadu, the Northern Regional Nutrition Officer, who made a presentation on the regional nutrition situation during the engagement, held in Tamale, underscored the importance of exclusive breastfeeding to the health and wellbeing of children.

She said children breastfed exclusively in the first six months of life and provided foods with the right balance of nutrients up to two years were more likely to survive, do better at school and be more productive as adults, she said.

Hajia Amadu said stunting sets in within the first two years of age.
“If you do not control it or prevent it, it will be very difficult to address,” she said, and called on parents to be serious with breastfeeding.

Hajia Amadu said as part of the ongoing campaign on the step-up of breastfeeding, the Nutrition Unit would visit media houses in the region to educate the public on the issues.

She encouraged media houses to share information on the need for exclusive breastfeeding to ensure good nutrition for children.

He announced that all vaccines for immunisation of children were available at health facilities in the region and urged parents to avail their children for the vaccines to protect them.

Meanwhile, a Northern Regional Health Media Committee has been constituted to champion health issues, including nutrition, in the region.

What is the Position of Haruna Iddrisu and Ato Forson on this Subject Matter of Conflict of interest?: Razak Kojo Opoku Writes