The amount is minus the money it has made on the Agyapa Royalties transaction among other similar deals. 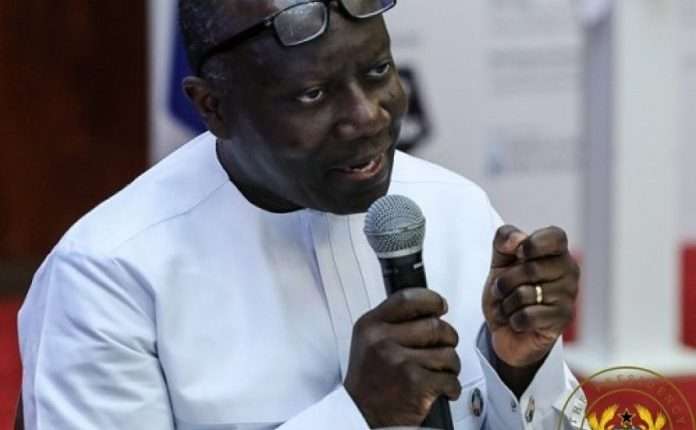 The Finance Minister, has appeared incentivized by what his private company, Databank, is making from the back of the state to be in the financial market, raising money through bonds both locally and internationally

The Herald, has obtained figures, showing that Ken Ofori-Atta’s Databank, has made a total of GH¢ 159.3 million, from the state by virtue of being a book-runner on government’s bonds in a clear case of conflict of interest situation.

According to the breakdown, Databank since 2017, when Mr Ofori-Atta, was made Finance Minister by his cousin Nana Akufo-Addo, has been making money, playing the role of a transaction advisor anytime the government runs to the financial market in search of cash through bonds, including Eurobonds.

The amount is minus the money it has made on the Agyapa Royalties transaction among other similar deals.

The sister companies of Databank, which have profited from state deals, have since relocated to a 10-storey building erected into the skies of the city christened “Advantage Place”. It is located at 23rd Mayor Road, Ridge West, Accra near the Greater Accra Regional Hospital, also known as the Ridge Hospital.

All the figures put together, showed that a total of GHc 159.3 million, has been made by Databank alone. 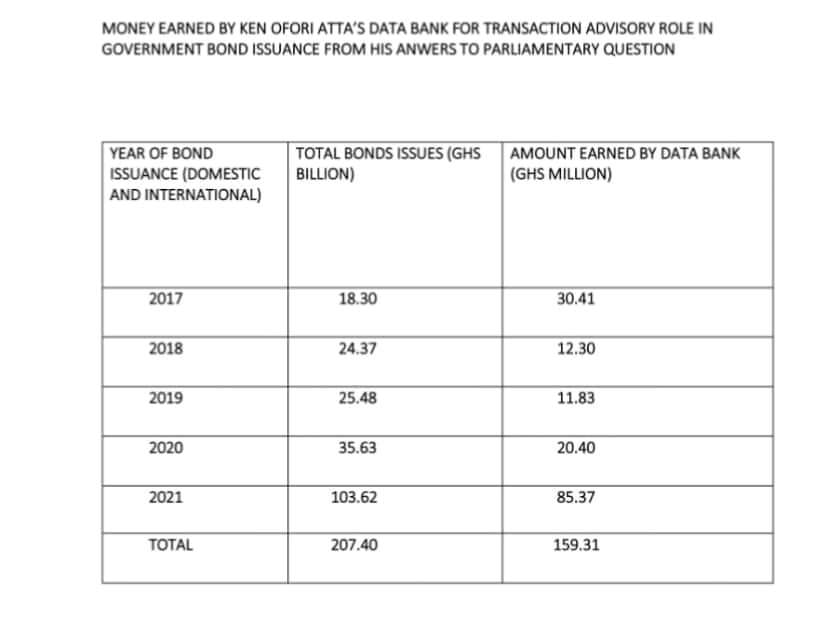 The Finance Minister told Parliament that “in 2017, total amount of the GHc17.3 billion in 3, 5,7,10 and 15-year local currency government bonds and US$221.4 million in domestic USD-denominated government bonds was raised from the domestic market with the assistance of the Joint Book Runners (JBRs) The cedi equivalent of US$221.4 million converted at the exchange rate of GHC4.5 to US$1.00 amount to GHC1 billion brings the total amount raised in 2017 to GHC18.3 billion from the issuance of government bonds.

According to Mr. Ofori-Atta, “in 2018, government, after the first mandate of the JBRS had expired, selected five firms namely; Barclays Bank Ghana, Databank, Fidelity Bank, IC Securities and Stanbic Bank Ghana as the new JBRs through an evaluation process. The decision to increase the JBRs to 5 was in response to the deepening of the market and the need to increase the marketing and the selling of the GoG bonds across a wider investor base.

“Government raised a total amount of GHC10.57 billion in 2,3,5,7 and 10-year local currency bonds through a combination of new issuances and bond re-opening/Tap-ins. Amount of GHC52.85 million was paid as fees to the JBRs, where each received GHc10.57 million in 2018. This was approximately 0.5 percent of the amount raised.

“Mr. Speaker, in 2019 a total amount of GHC9.88 billion in the medium to longer dated bonds was raised. A fee of GHC9.88 million was paid each JBR totaling GHC49.42 million for the JBRs engaged in 2018. This makes 0.5 percent of the amount raised.

“In 2020, the 5 BJRs executed 20 new transactions across the 2-year to 7-year tenors and re-opened the 20-year bond. These transactions cumulatively raised about GHC16.6 billion in local currency government bonds, and US$388.9 million in domestic USD-denominated treasury bonds. A total amount of GHC18.83 million totaling GHc94.14 million, which constitutes 0.56 percent of the total amount raised.

“The performance of the JBRs was against the backdrop of a seriously challenged macro-fiscal environment and tighter financing condition induced by the COVID-19 pandemic which muted offshore demand for local currency issuances leaving local investors to take up a large proportion of the year’s Treasury’s financing operations.

“In May 2021, based on the new Primary Dealers (PDs) and Bond Market Specialists (BMS) Guidelines, government selected new PDs out of which, nine (9) institutions were given the mandate as BMS to be in-charge of the book-building process.

“Mr. Speaker, on the external front, government in 2017 did not embark on any Eurobond transaction. However, government in 2018 procured the services of the under listed transaction advisors to raise an amount of US$2.0 billion in a 10-year and 30-year Eurobonds; four (4) International Lead Managers (JP Morgan, Bank of America, Citi Bank and Standard Chartered Bank), three (3) local transaction advisor (Fidelity bank, Databank and IC securities).

In 2019 and 2020, Government raised a total of US$3.0billion in each year. From 2019, Government took a proactive stance to build the capacity of domestic financial institutions with exposure and skill for future active roles in Eurobond transactions. In view of this, Government for the 2019 and 2020 transactions procured the services of three (3) local co-managers (Fidelity, Databank, and IC Securities) and two sub co-managers (GCB and SAS Investment). For the issuance, they worked alongside the five international lead managers, White & Case as the international legal advisor, JLD $MB and CQ Legal as the local advisors.

THE CHURCH, PULPIT & CASSOCK: A shameful shield against corruption and wrongdoing?

Boy Who Sang Like Akon with Sweet Voice gets Record Deal