The Ghana Armed Forces have been used to steal large tracts of Lands some it allegedly illegally sold to private developers [e.g. Esi Gbedemah] through senior officers. 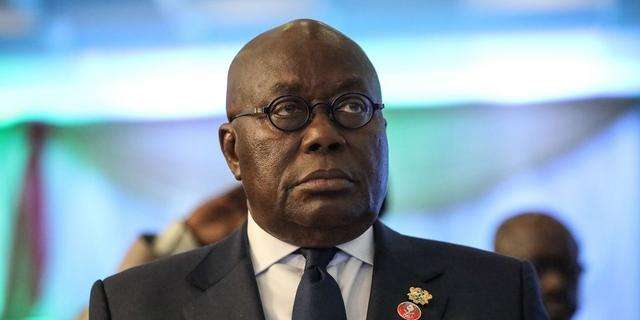 All arms of Government have been complicit in the Land Looting that has turned paupers into millionaires and business moguls [e.g. the Zoomlion story] whiles it affords corrupt politicians to hide the proceeds of corruption and money laundering in shady Land transactions and fraudulent allocation of State Lands.

Besides Parliament, the Executive and the Judiciary, the security services particularly the Police and Military Chiefs, Civil Society groups like the IEA and CDD are the biggest institutional beneficiaries of the Land Loot thus their deafening silence despite abundance of evidence of the canker that has robbed Ghana and the Original Land Owners.

The State Sponsored Landgrab was structured to permanently deprive the Original Land Owners of their Lands and block any possibility of redress.

The Parliament is responsible for making laws, such as the obnoxious ACT2, which allows for the stealing of Accra Lands by thieves who build quickly to lintel level on the blindside of the Original Land Owners, a phenomenon which gave birth to Landguardism…

The Executive was responsible for making Policy, such as In-Filling Policy which allowed for the fraudulent allocation of State Lands to private persons…

The Judiciary was responsible for the interpretation of the Law, a classic miscarriage of Justice being the La Mantse Nii Kpobi Tettey Tsuru II vs Attorney General where the Supreme Court interpretation of Article 20 of the Constitution was made to equate “Public Purpose” and “Public Interest” thus opening the floodgates for the Land Looting…

The Police who were to protect lives and property are often involved in the Landgrab and molest the Original Land Owners whenever they embarked on demonstrations such as the famous “Yaabi Onyé Demo” in which some GaDangme Chiefs and intelligentsia including Justice VCRAC Crabbe, Dr. K. B. Asante, Prof. Atukwei Okine, Dr. Josiah Aryeh were agitating among others for the respect for their Language, Heritage, Culture, return of their Land, Ada Songhor Salt and Lagoon were sprayed with hot water by the Ghana Police at the 28th February Crossroads leading to the Osu Castle where they were to present a petition to President Kufuor who had refused to meet them…

The Ghana Armed Forces have been used to steal large tracts of Lands some it allegedly illegally sold to private developers [e.g. Esi Gbedemah] through senior officers.

The Military often in their attempt to annex La Stool Lands clashed with the Original Land Owners, a classic  example being the 15th April 2021 Kpletso Shooting and Assault by armed men in Ghana Army uniforms on unarmed civilians including journalists injuring many persons, three of whom have subsequently  died of their injuries…

The current Lands Minister, Samuel Abu Jinapor lamented on national television that the people who are revered in our society go round on weekends looking for State Lands and Bungalows with little or no activity then come to his office to pressure him to allocate these prime lands to them.

Two of his predecessors Inusah Fuseini (NDC) and Peter Amewu (NPP) also described the La Land Looting as “Kelewele and Toffee” sweetheart deals for family and friends of State Actors.

Sadly the backgrounds of some of the beneficiaries of the fraudulently allocated State Lands should have put them rather at the forefront of the Fight against Land Looting.

Over 90% of the names on the infamous list of Land Looters are Policymakers, Lawmakers, Lawyers, Judges and Academics who have written books on Land Management.

Some have died and willed the Looted Lands to their families FOREVER LIKE SIR JOHN; thus claiming the State Lands as FREEHOLD properties and depriving the succeeding generations of the Original Land Owners of their Lands FOREVER.

Below are a few from the judicial stock;

She is battling corruption allegations against the COVID-19 Fund which she currently heads.

Justice Sophia Akuffo paid GHc7000 for prime Cantonments State Land and is still holding on to fraudulently allocated State Lands despite an Article 146 Petition for her removal which President Akufo-Addo refused to act on.

She was the first female Chief Justice of Ghana She retired in 2017 after five decades of service to the state and is currently a member of the Council of State.

Justice Georgina Theodora Woode was the only person to have returned the prime Land fraudulently allocated to her after an Article 146 Petition for her removal was acted on by President John Evans Atta Mills.

The UN Appeal Tribunal is an avenue that the LA STOOL whose lands have been looted could have sought redress.

and was also a Emeritus Professor of law at Rutgers University, Camden, New Jersey, United States, a chairman of the Law Reform Commission of Ghana, a Fellow of the Ghana Academy of Arts and Sciences and a fellow of the Royal Society of Arts, London.

Justice Kludze died on 5th October 2013, at age 79 naming his Child, Ave Kludze, a rocket scientist with NASA to inherited the Looted Land which rightfully belongs to the La Stool.

He has been a Justice of the Supreme Court of Ghana since his appointment in 2018.

Prof. Ashie Kotey was the author of the Books: Land Management in Ghana: Building on Tradition and Modernity, Falling into Place

The Courts of Ghana are effectively closed to the La Stool should it seek UNBIASED JUSTICE on its Looted Lands as stated in the 2017 Petition to President Akufo-Addo from the La Mantse, Nii Kpobi Tettey Tsuru II hinting of the La Stool seeking legal redress for the return of its Lands.

On Thursday 7 October 2010, Justice Georgina Theodora Woode was among 15 people named by the Committee for Joint Action [CJA] as a beneficiary of allegedly illegal land allocation by the former NPP government.

In an official statement, the CJA claimed that the Chief Justice, who should know the law, threw away any sense of integrity and decency and went for the land-grab.

“It is a travesty that this same person, the Chief Justice, is the one who is appointing judges to sit on cases to decide on whether the land-grab is lawful or not.”

According to official Government policy which was in violation of Article (20) of the 1992 Constitution of Ghana which gives the first right of refusal to the Original Land Owners, plots would be openly advertised and allocated on the basis of competitive bids to ensure value for money for the public.

In reality, however, there was a State Sponsored ‘land grab’ in full swing.

Due to fierce electoral competition between the political parties in Ghana, governments often use State Land resources to secure short-term political support rather than for long-term development at the expense of the State and the Original Land Owners.

ALL LOOTED STATE LANDS MUST BE RETRIEVED AND RETURNED TO THE ORIGINAL LAND OWNERS AS PRESCRIBED BY THE CONSTITUTION OF GHANA.

Please find attached the List of Land Looting particulars complete with dates, names, location and size of looted lands as well as amounts paid, if at all, culled from the appendices of the Article Petition for the removal of Justice Sophia Akuffo as Chief Justice of Ghana which President Akufo-Addo refused to act on for two years.

God Save Our Homeland Ghana and help us RESIST THE LAND LOOTERS. 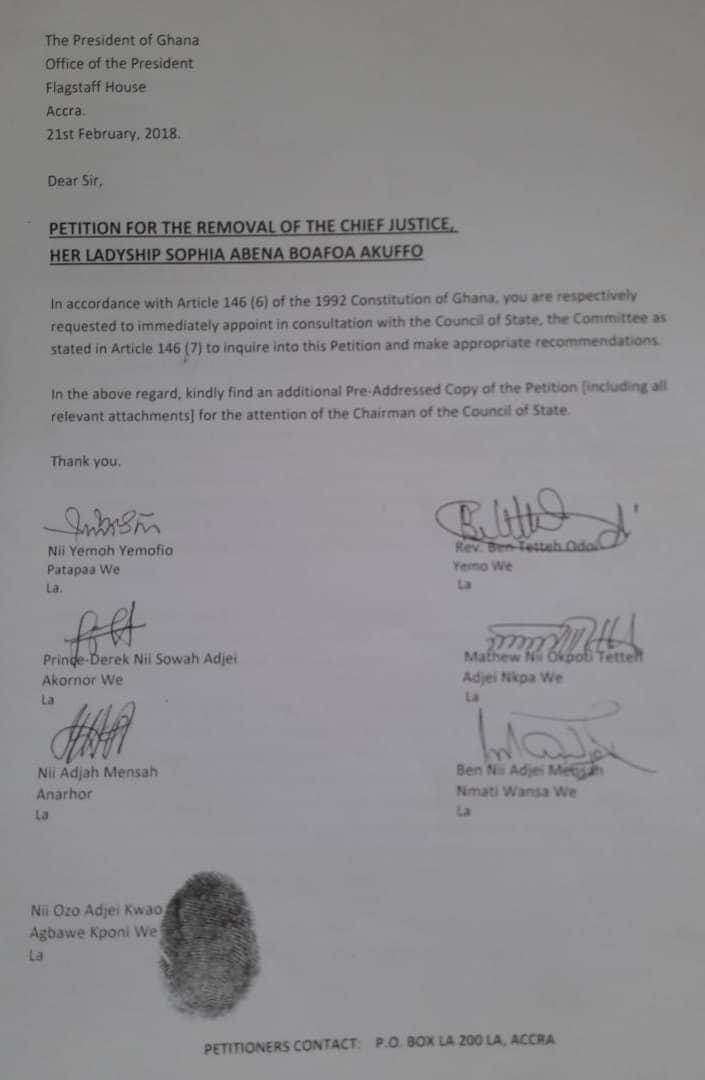 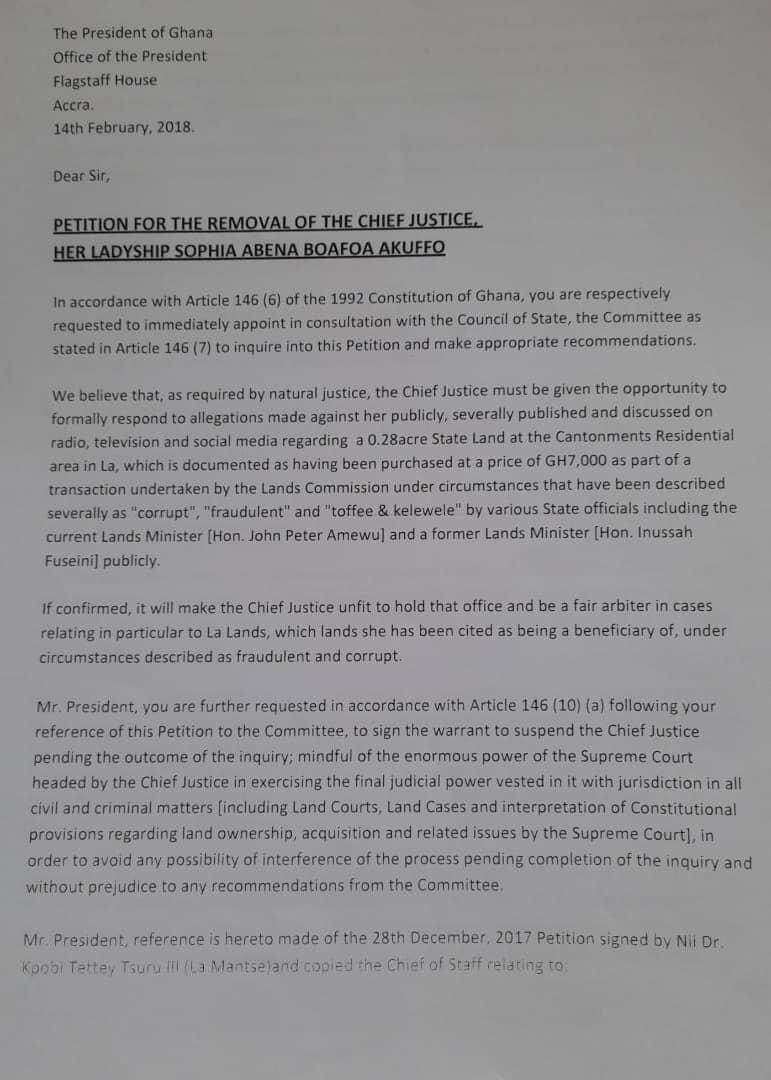 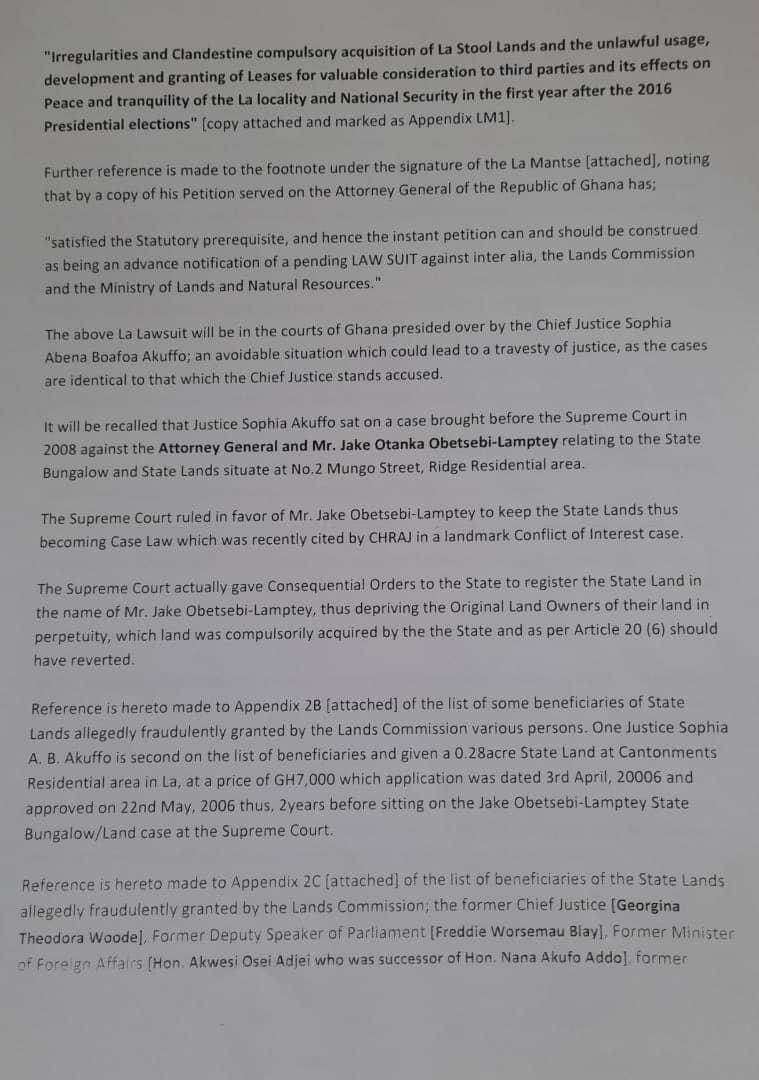 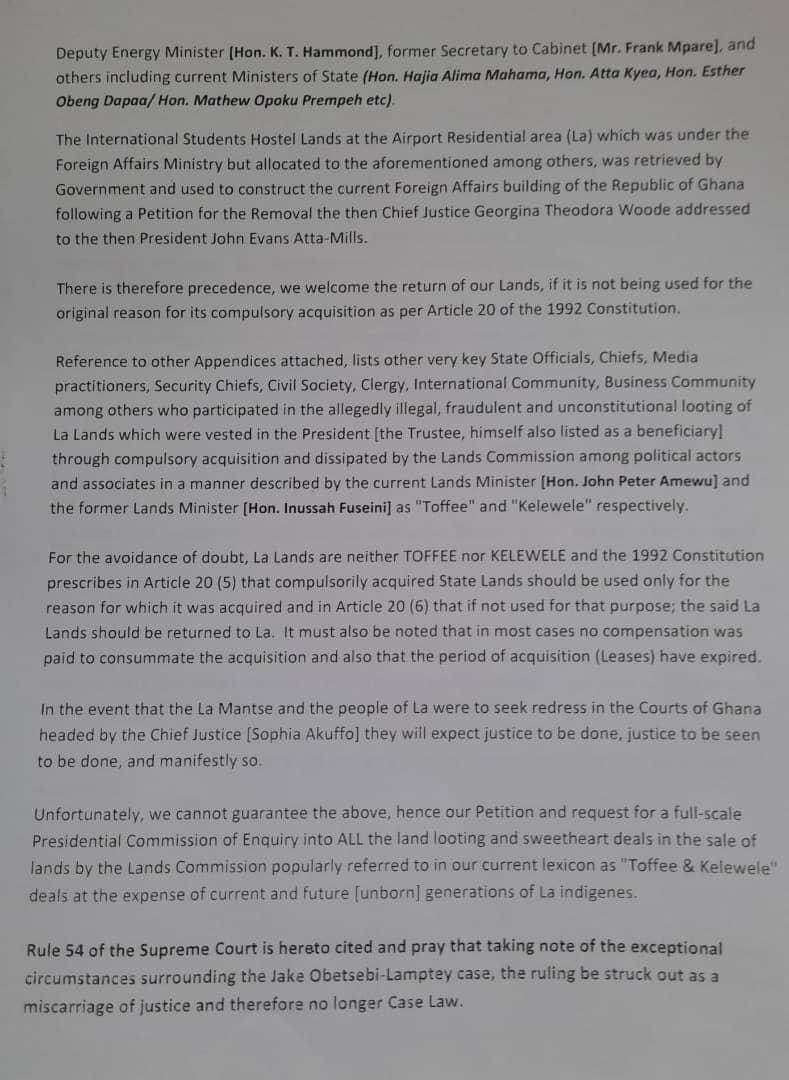 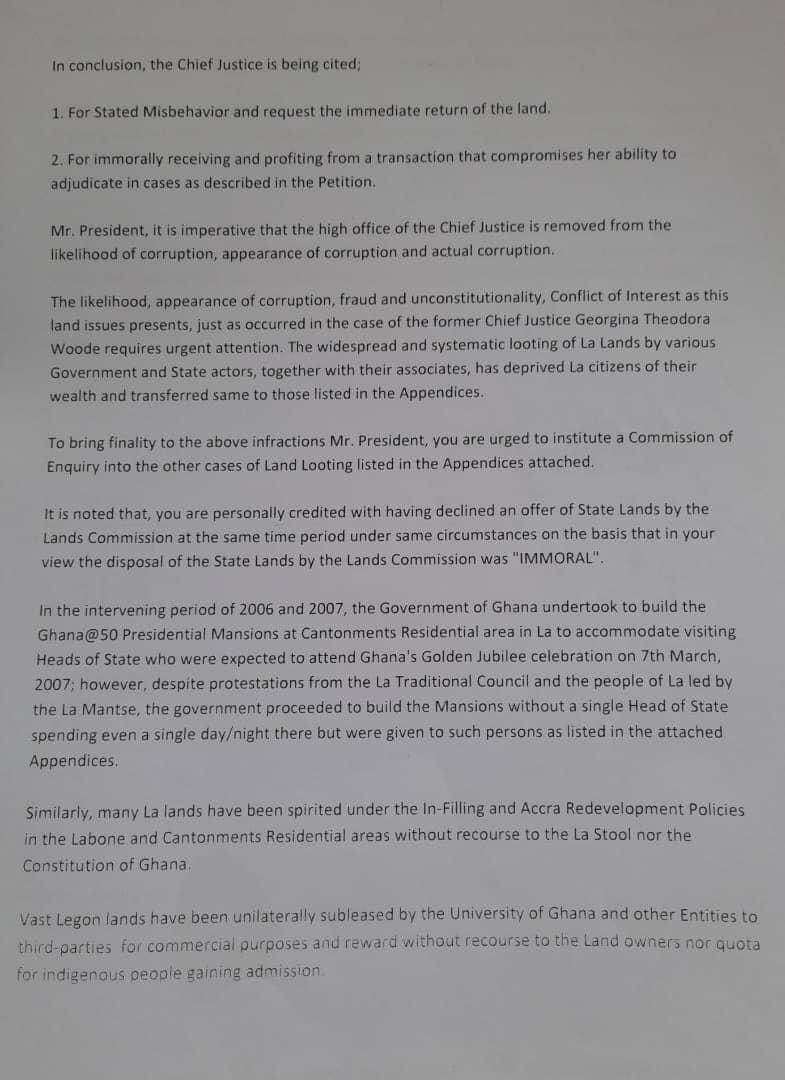 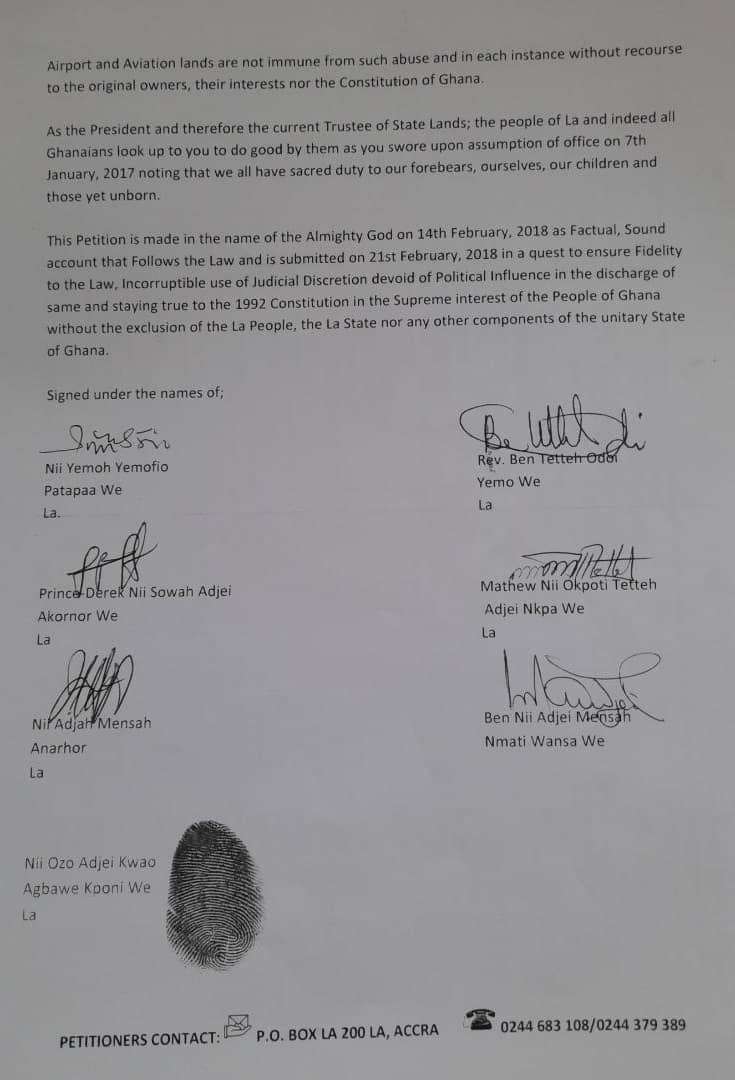 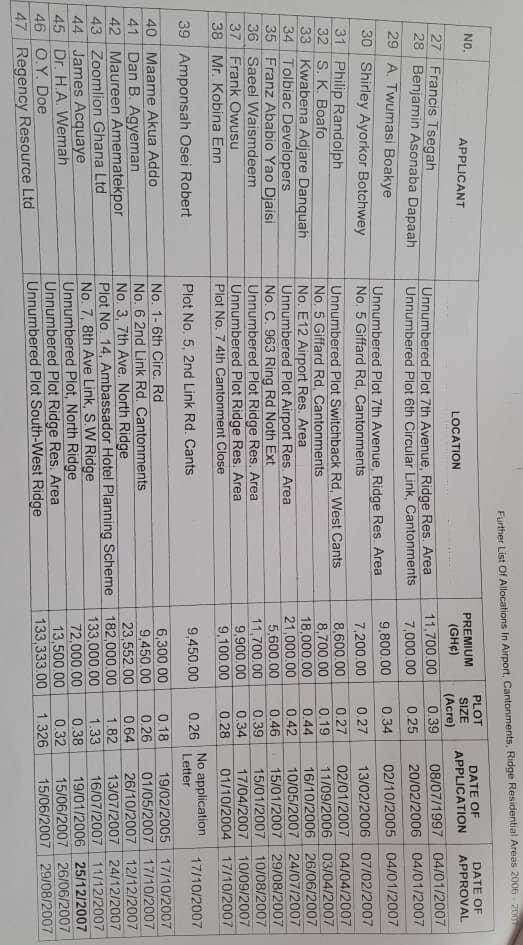 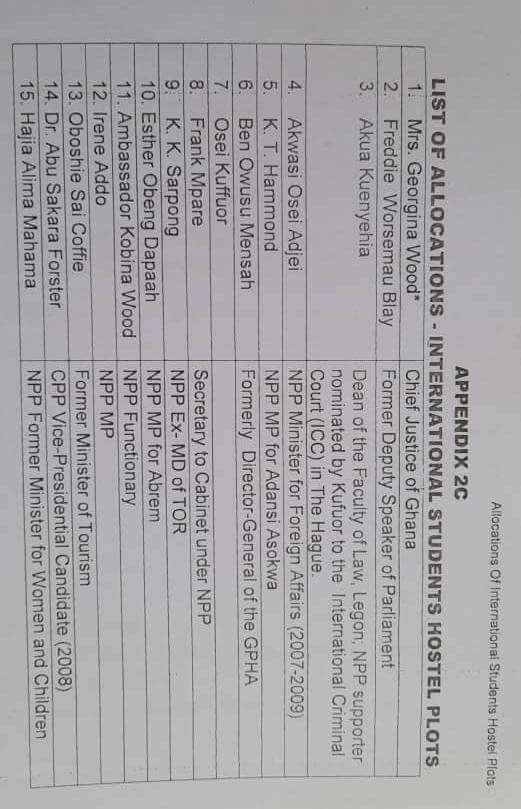 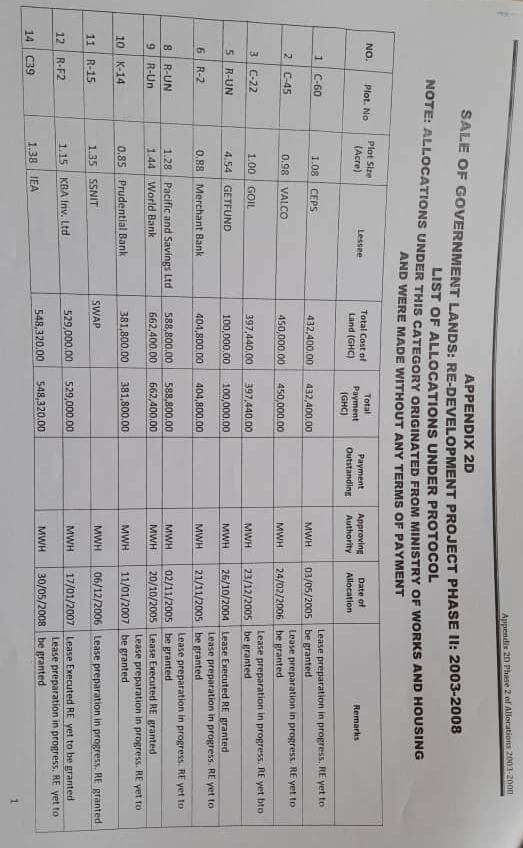 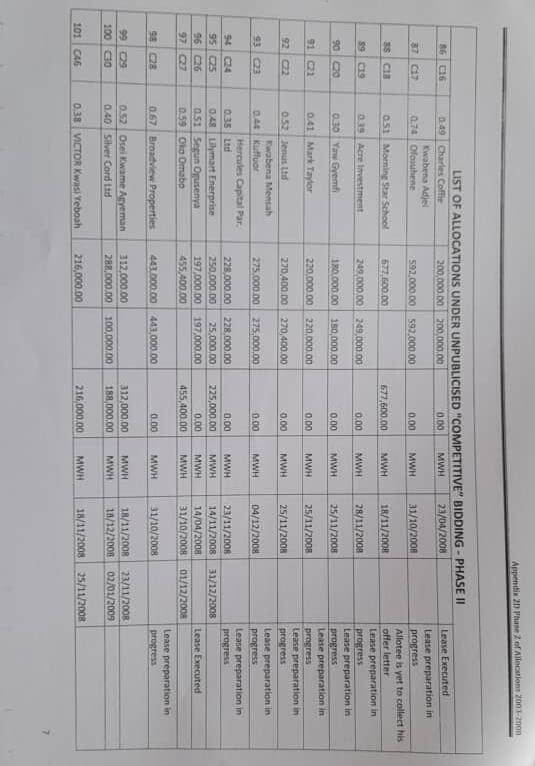 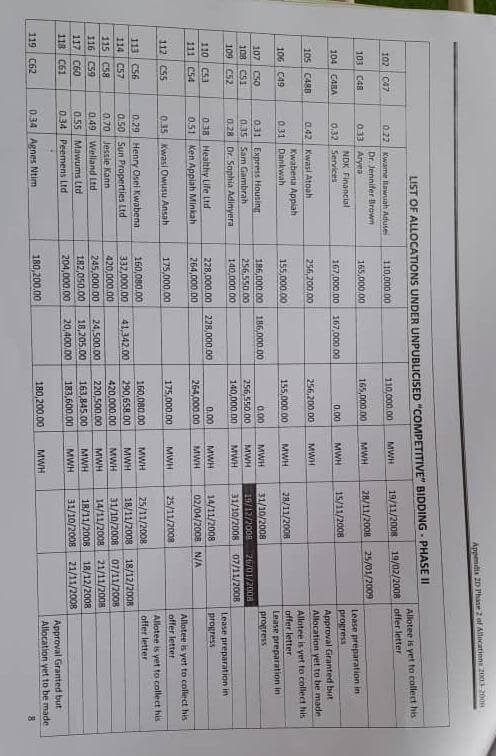 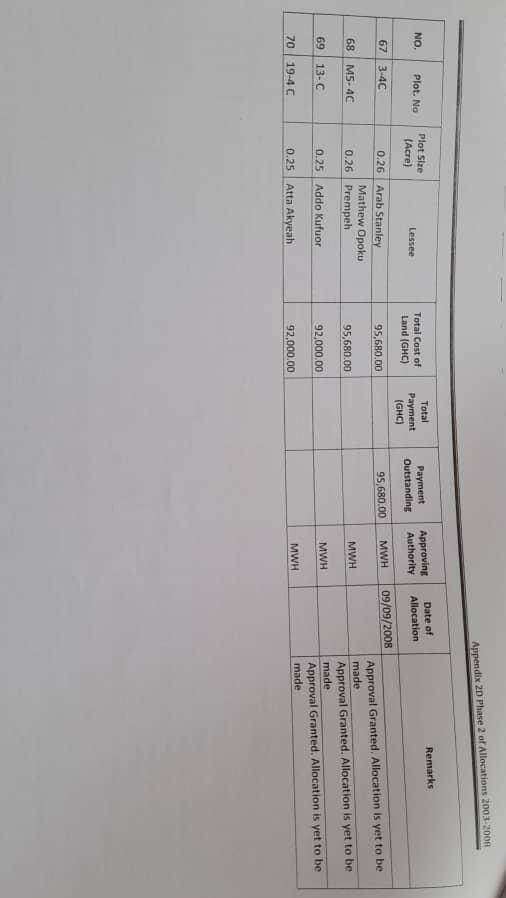 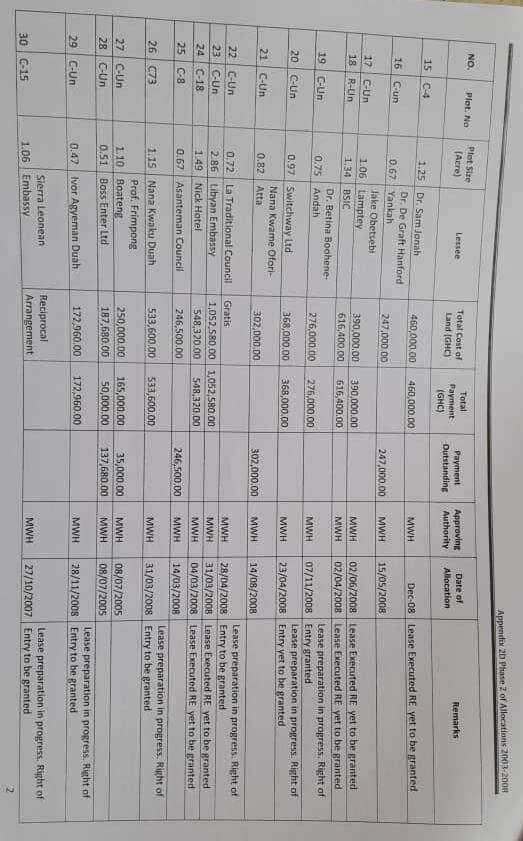 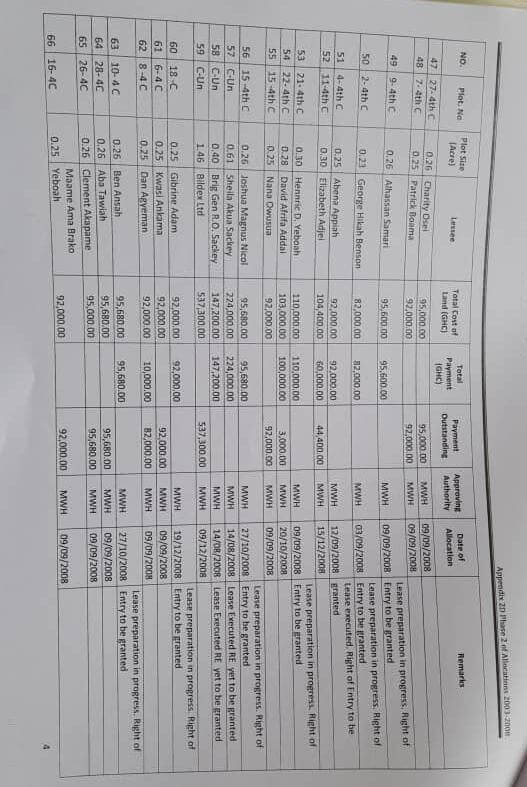 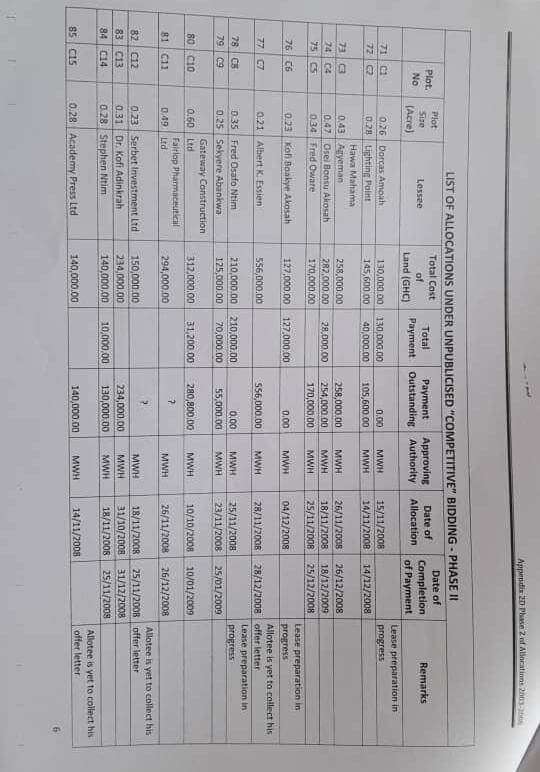 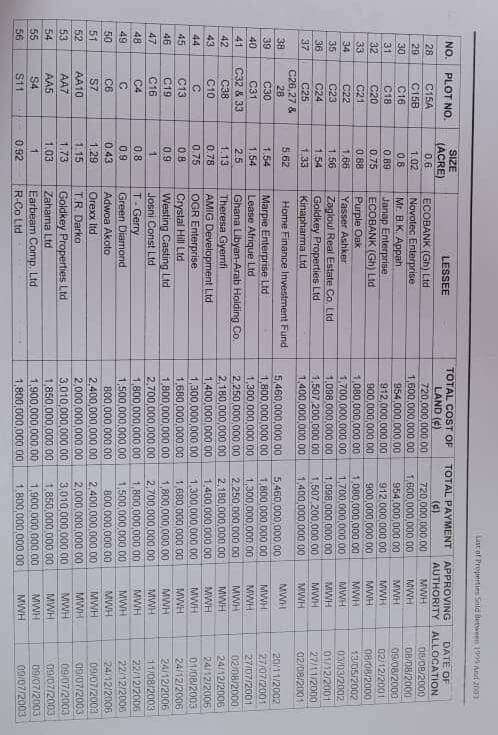 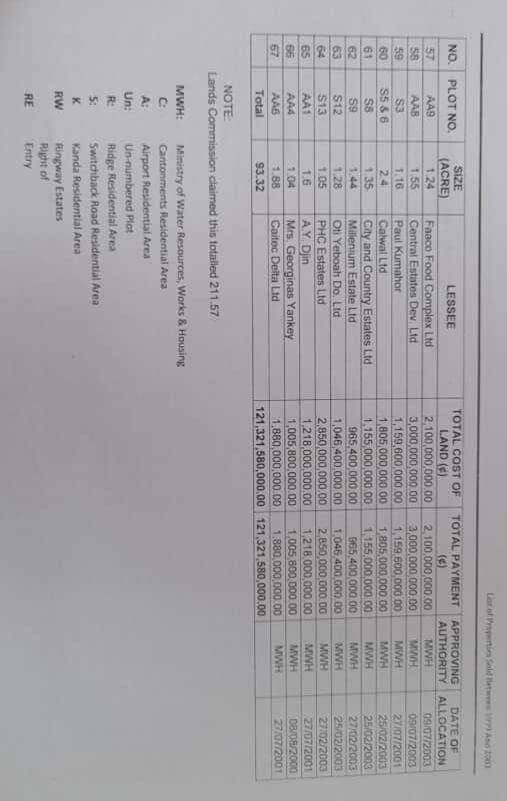 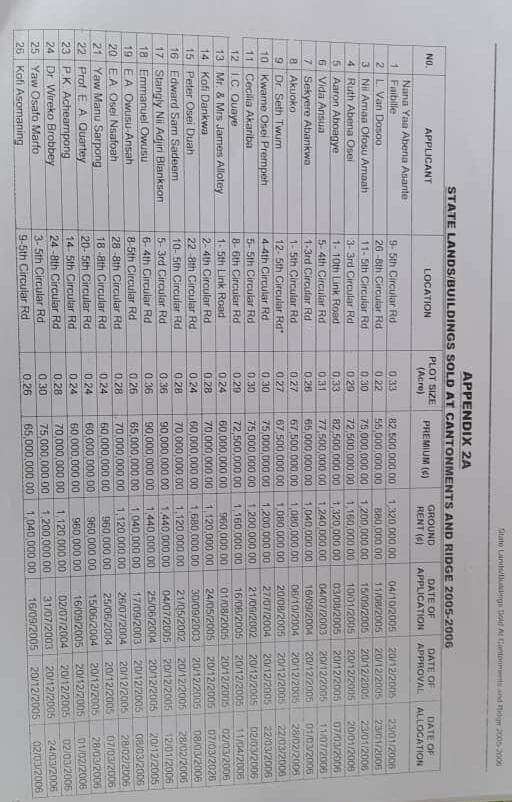 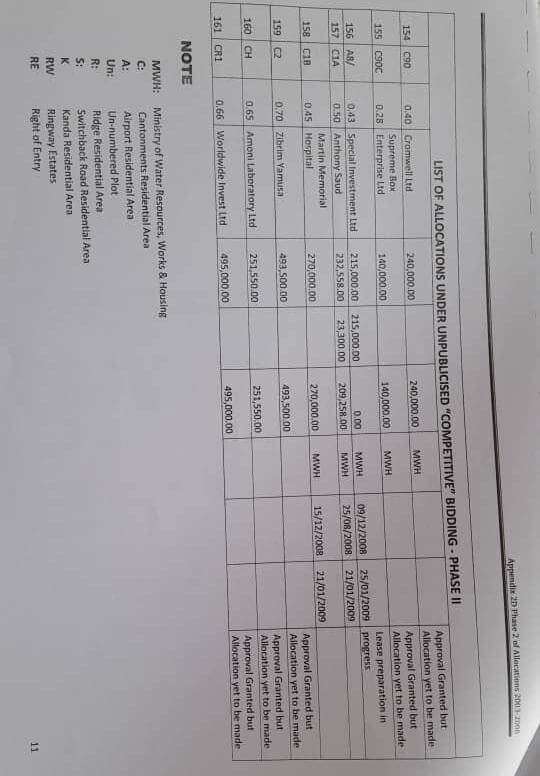 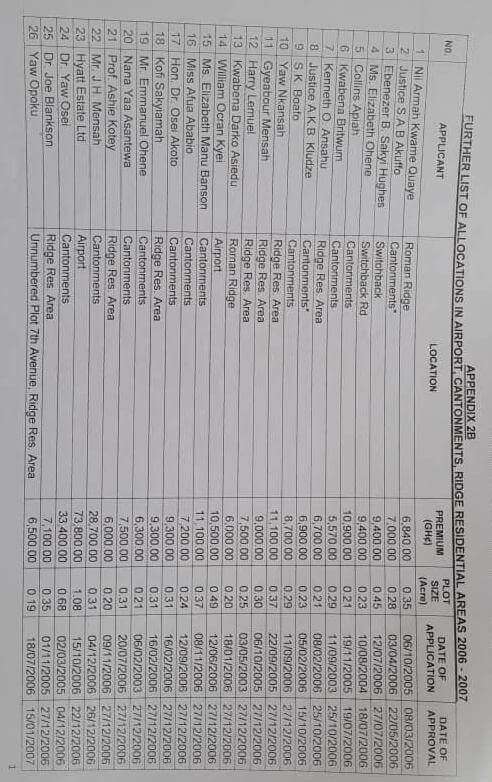 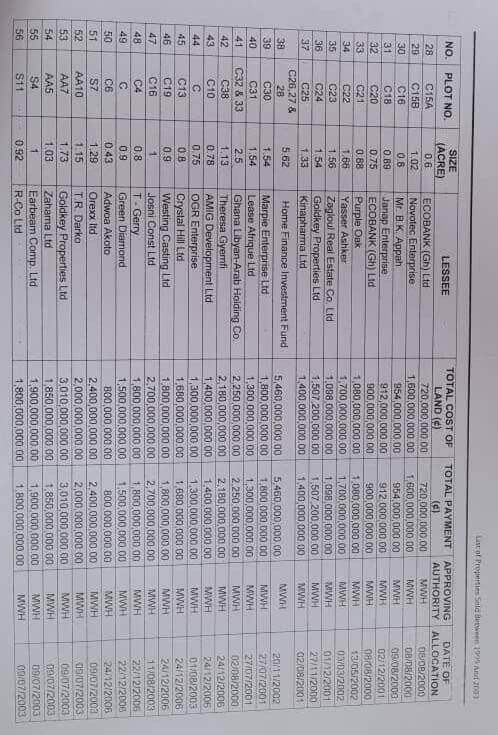 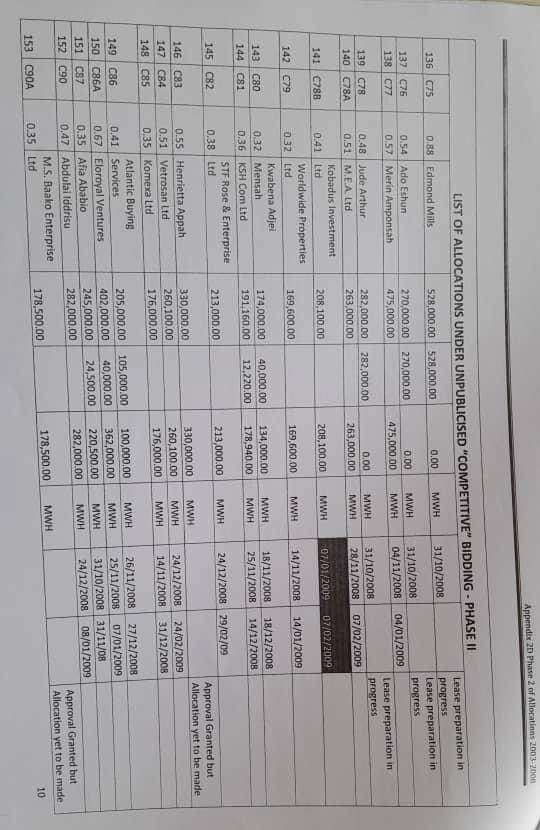 Songhor Salt to Save Ghana: