Lawra Senior High dormitory yet to be rehabilitated for students

“So, we are still appealing to philanthropic organizations and all the necessary stakeholders in the municipality and the country at large including the GetFund administrator to help us restore the dormitory block,” 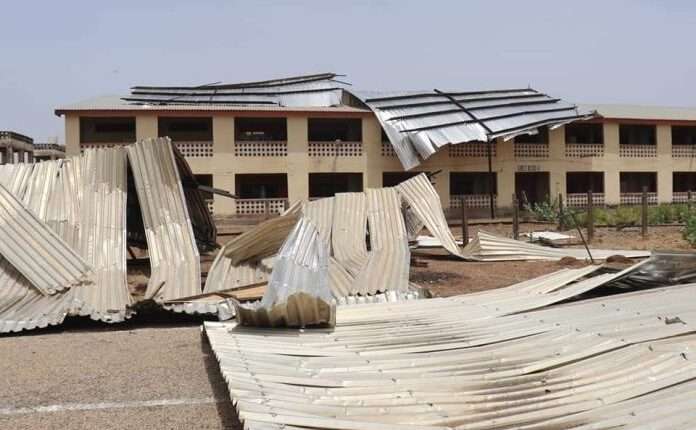 The Girls’ dormitory of the Lawra Senior High School in the Lawra Municipality that was ripped off by a rainstorm in March this year, is yet to be rehabilitated to house the displaced students.

Aside from the dormitory being ripped off, the windows and window nets of the dormitories had also been worn out leaving the students at the mercy of the adverse weather condition and mosquito bites making them susceptible to malaria infections.

Naah Alhaji Seidu Tungbani, the Headmaster of the school, revealed this when the Lawra Senior High School Old Students Association (LASSOSA) donated 100 pieces of students’ mattresses to the school to help mitigate the plight of the students.

In all, 216 girls were displaced by the disaster as their dormitory was ripped off destroying their personal belongings including mattresses and books.

He said all efforts to get the attention of the necessary authorities including the District Assembly, the GES, and the President heed heed to the plight of the students haveve not yielded positive results.

“As we speak,, the dormitory that was ripped off remains as it is. Despite several appeals, written communications, and presses to the government we have still not received any positive result from the government.

“So, we are still appealing to philanthropic organizations and all the necessary stakeholders in the municipality and the country at large including the GetFund administrator to help us restore the dormitory block,” Naa Alhaji Tungbani said.

While expressing gratitude to LASSOSA for supporting its alma mater with the mattresses, he said other challenges, Naa Alhaji Tungbani explained that the school population was about 2000 with limited infrastructure and social amenities such as sources of potable water, which had made lives unbearable for the students.

He appealed for additional boreholes to augment the existing mechanized borehole, which served as the sole source of water for the school

“A population of about 2000 students and staff are relying on this mechanized borehole as the main source of water, so, that is why we don’t open the taps throughout the day, two hours in the morning and two hours in the evening”, he added.

Mr Thomas Tengan, the Vice President of LASSOSA, who handed over the items to the Upper West Regional Education Directorate for onward presentation was saddened by the failure of the authorities to rehabilitate the structure after about five months when the disaster occurred.

“We call on the President of the Republic of Ghana and all relevant stakeholders to salvage the situation of our dear students whose lives are in danger and whose studies are jeopardized by the trauma and insomnia caused by the disaster.

Mr Tengan also recommended periodic assessment and renovation of the structures in the school to avoid a similar disaster in the future.

He also entreated the old students of the school to join hands to contribute to the development of their alma mater.

GOT A STORY? Share with us. Email: [email protected] or [email protected] WhatsApp: +233(0)244822034
GESGETFundGirls DormitoryLawra Senior High SchoolLawra Senior High School Old Students Association (LASSOSA)rehabilitated
0
Share FacebookTwitterWhatsAppTelegram
Subscribe to our newsletter
Sign up here to get the latest news delivered directly to your inbox.
You can unsubscribe at any time