Can our friends in the NPP and government stop shifting the goal post and tell the nation whether these statements made by H.E John Mahama are true or false? 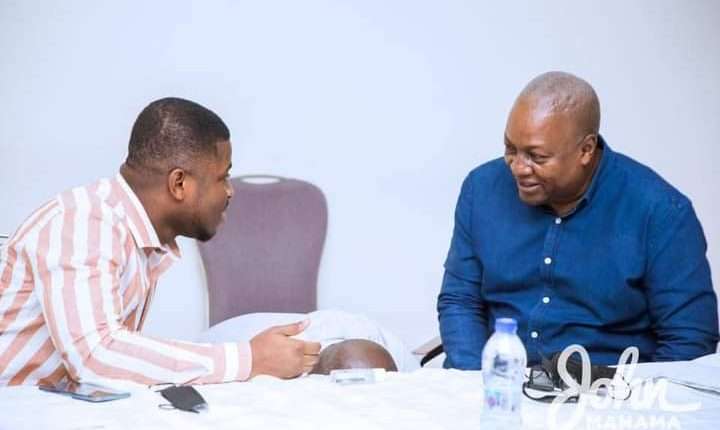 The desperate attempt by government and NPP communicators to mislead Ghanaians about the emoluments and privileges of former President John Dramani Mahama is shameful to say the least.

For the records, the former President in his recent interview with TV3’s Alfred Ocansey, was very clear about the specific bills and expenditure he has personally borne since he left office. Rather than rebut or respond to the specific issues raised by the former President, some NPP and government communicators have shamelessly, albeit in vain, resorted to the circulation of some official documents that have no bearing whatsoever on the issues at stake. It is therefore important to situate the discussion within the proper context.

In the said interview, H.E John Mahama made ten (10) important points that are worth highlighting:

1. He stated that the claim by the Bono Regional Chairman of the ruling NPP that an ex gratia amount of GHS14 million was paid into his ADB account in the year 2013 is an “absolute lie”. And that the only payment that was made to him by the Controller and Accountant General in 2013 was his salary arrears – an amount of GHS230,000.

2. He also stated, that the claim by the Bono Regional Chairman of the ruling NPP that he has received privileges and perks worth GHS15 million since he left office in 2017 is “absolutely untrue”. And that he receives only his monthly pension as former President.

The former President went on to say that:

3. He pays the electricity bills for his household and office;

4. He pays the water bills for his household and office;

5. He lives in his own accomodation so the State does not pay him anything for accomodation.

6. The State has not given him an office. And that he rents an office space in East Cantoments, Accra which he personally pays for.

8. He pays his own domestic staff.

9. He pays for his medical bills.

10. He pays his own air tickets and that of his assistants whenever he travels.

Can our friends in the NPP and government stop shifting the goal post and tell the nation whether these statements made by H.E John Mahama are true or false? Given the fact that the emoluments and privileges of former Presidents are matters of public record, can government rebut any of these statements with evidence? When is government releasing official documents that confirm the payment of ex gratia of GHS14 million and GHS15 million to former President Mahama, as alleged by the irresponsible Bono regional chairman of the ruling NPP?

The point has to be made, that at no point in the said TV3 interview did former President Mahama say that he pays the salaries of his own office staff. Therefore, the official documents on payment of salaries of office staff of former President Mahama by the State as required by law, being circulated on social media by some NPP communicators are complete red herrings being introduced into the discussion just to obfuscate the issues and confuse Ghanaians.

Additionally, at no point in the said interview did H.E John Mahama say that the State has not allocated him any official vehicle. Our friends in government and the NPP cannot set their own questions and proceed to answer same. Thus, the memos on the allocation of official vehicles to former President Mahama being circulated on social media by some of their communicators are of no relevance to this discussion.

For the records, former President Mahama was allocated four (4) used State vehicles when he left office in 2017 – two SUVs and two saloon cars. The two SUVs (Land Cruiser GXRs) are for the use of the National Security detail attached to the former President’s residence and office for his protection. These two SUV vehicles broke down in the year 2018 and the Presidency was duly informed. Interestingly, the Akufo-Addo/Bawumia government refused to replace them until 2021, after the determination of the 2020 election petition. The former President had to personally buy two (2) vehicles for the National Security detail assigned to him, which they used from 2018 until they were replaced in the year 2021 by the State.

Few weeks ago, government contacted the logistics officer at the office of former President John Mahama to come for two (2) new saloon vehicles to replace the two (2) used saloon vehicles he was allocated in the year 2017. H.E John Dramani Mahama rejected this offer on grounds that the vehicles are still operational and serviceable, hence did not need to be replaced. Government subsequently called the logistics officer at the Office of the former President to come for an additional saloon vehicle to beef up the mobility of his accompanying National Security detail. This saloon vehicle was delivered to the office of the former President only last week. These are the vehicles that are the subject of the memos being circulated by NPP apparatchiks on social media.

It is important to note, that all the five (5) State vehicles allocated to the former President are fueled, serviced and maintained by him and at his own expense.

It is also worthy of note, that the former First Lady, H.E Lordina Mahama was not allocated any official vehicle almost five (5) years after she left office in 2017. It was only in the year 2021, after the Supreme Court decision on the 2020 election petition that she was allocated one SUV and one pickup.

In conclusion, let it be placed on record that Former President Mahama since leaving office in 2017, has never complained about the provision, adequacy or otherwise of emoluments and privileges due him as a former President of the Republic, even though these are his entitlements under the law. But for the yet again strenuous attempt by the Bono Regional Chairman of the NPP, who has a knack for heaping all manner of lies and vitriol on the former President, he has never for once contemplated making a fuss out of these issues.

Having been compelled to set the records straight, I can appreciate how the truth has inadvertently and inescapably exposed the continuous mistreatment, yet unguarded calumny against H.E John Dramani Mahama and his dear wife, H.E Lordina Mahama by the Akufo-Addo/Bawumia government and their assigns. This notwithstanding, the Akufo-Addo/Bawumia-NPP government must approach this conversation with a sense of candor. They will not be allowed to create their own distortions and proceed to defend same.

Which method of contraception is most effective?