The Open Parliament Index objectively seeks to strengthen Parliamentary Institutions towards the advancement of parliamentary openness across national, subnational and regional Parliaments.

It is also to provide a standard system for accessing Parliaments across Africa using the three pillars of open Parliament including – Transparency, Civic participation and Public Accountability.

In a remark, a Member of the working Group of the African Parliament Monitoring Organization (PMO) Network and Senior Program Officer at CDD-Ghana, Regina Oforiwa Amanfo-Tetteh said Parliament alone cannot address its short falla hence the need for support from State and non State actor organizations such as Civic Society Organization (CSOs) to assist.

She maintained that the work of PMO is of essence because countries in Africa an are experiencing significant democratic backlash as several remarkable democratic progress are eroding.

She said the only arm of government that suffers when there is democratic interaction is Parliament, and therefore, it is important for Parliament as a principal stakeholder to show inherent interest in monitoring and accessing its own performance and ensuring that, it is meeting constitutional obligations and expectations of the public, Civic Society and the private sector.

She called on Parliaments in West Africa to reflect on their performance and improve where necessary to bring maximum efficiency to the work of the legislature. 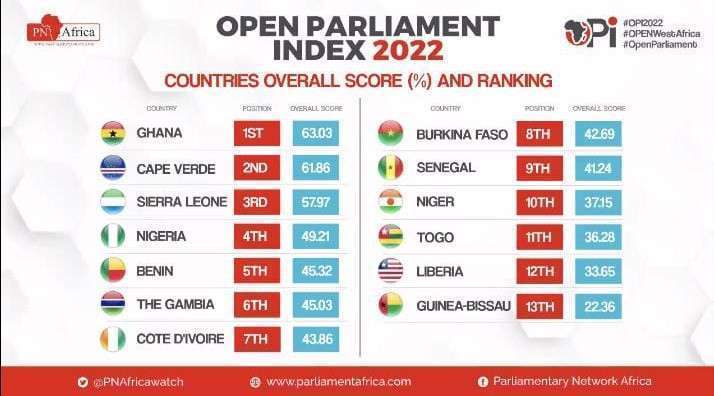 The First Deputy Speaker of Ghana’s Parliament, Joseph Osei Owusu who welcomed the initiative said legislative representation is about representing and protecting the collective hope and aspirations of the citizenry by Parliament which is clothed with enough powers to make laws that could save the intended purpose.

Delivering the key note address on.behalf of Speaker Alban Bagbin, Mr. Osei Owusu said, it is sad to note that the public is loosing faith in the legislature and politicians in general. He said the citizens believe their collective interest is being sacrificed for personal gains.

He said the Open Parliament Index initiative is very necessary and as it will go a long way to challenge African Parliaments to respond to the collective call of the people.

Considering objectives of the open Parliament Index, Mr. Osei Owusu was of a strong view that Ghana’s Parliament is not faring badly at all.

GOT A STORY? Share with us. Email: [email protected] or [email protected] WhatsApp: +233(0)244822034
AccraAfricaAfrican Open Parliament IndexGhanaJoseph Osei-OwusuParliamentPNAfrica
0
Share FacebookTwitterWhatsAppTelegram
Subscribe to our newsletter
Sign up here to get the latest news delivered directly to your inbox.
You can unsubscribe at any time

Too many Stupid Leaders in Ghana; how is IMF going to cure the Stupidity of our Leaders – Kwesi Pratt Jnr.

Ken Ofori-Atta is the Biggest Threat to the Survival of Ghana: