The Majority Leader, Osei Kyei-Mensa-Bonsu must immediately name the Bribe-Giving Businessman because he promised to investigate 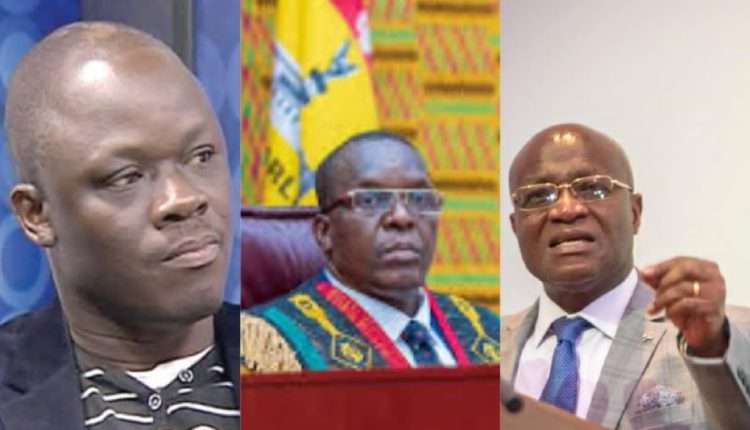 The Special Prosecutor, the IGP and other State investigative agencies are silent..

President Akufo-Addo and Bawumia would have ordered the arrest and prosecution of the criminal Bribe-Giving Businessman, if their names were mentioned…

The Majority Leader, Osei Kyei-Mensa-Bonsu must immediately name the Bribe-Giving Businessman because he promised to investigate;

Like Joy FM, they are being sponsored by Ken Ofori-Atta, his friends and business associates.

The Joy FM Super Morning Show yesterday when they refused to ask Andy Appiah-Kubi the identity of the CRIMINAL BRIBE-GIVING BUSINESSMAN who attempted to influence the NPP MPs to rescind their decision to have the Finance Minister sacked, curiously had adverts from Ken Ofori-Atta’s Enterprise Insurance and his friend McDan playing on the show…

Today, the Censure Committee Hearing Report will be presented to Parliament so the Plenary can debate and vote on the Motion to Censure Ken Ofori-Atta.

The Finance Minister was given two (2) out of the seven (7) days the Censure Committee hearing had to do their work, to study the allegations against him.

In the end there was not enough time to do a thorough hearing, GNPC needed to be called back to answer questions on the unconstitutional offshore arrangement with the Oil Money and identities of the directors of the Jubilee Oil Holding Limited registered in the Cayman Islands tax haven where Ken Ofori-Atta has a Tax Avoidance Company.

Ken Ofori-Atta had questions which should have been asked but struck out by the KT Hammond half of the Censure Committee.

The budget reading on Thursday 24th November which coincides with Ghana’s world Cup football match should not affect the Parliament Censure Motion.

The budget cannot be read if there is no quorum in Parliament.

The budget is said to be meaningless without an IMF DEAL, yet there is currently no IMF staff level agreement with the government…

Parliament must do a diligent work.

The NPP MPs are behaviour in a very strange way, suggestive of pretence or blackmail.

The bribery of the NPP MPs must be thoroughly investigated and all guilty persons punished in accordance with the laws of Ghana, which makes Bribe-Giving and Bribe-Taking criminal offences.

Ghanaians will not rest until the criminal Bribe-Giving Businessman is named, arrested and prosecuted together with accomplices.