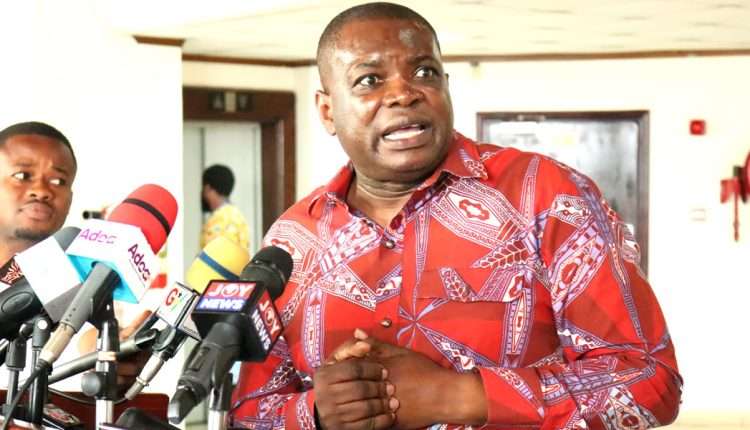 A letter signed by General Secretary of the party, Fiifi Fiavi Kwetey addressed to the Speaker of Parliament named Member of Parliament (MP) for Ajumako/Enyan/Essiam in the Central region, Dr Cassiel Ato Baah Forson , Member for Ellembele in the Western region, Emmanuel Armah-Kofi Buah and the Member for Adaklu in the Volta region, Kwame Governs Agbodza as Minority Leader, Deputy Minority Leader and Minority Chief Whip respectively.

The trio will take over from MP for Tamale South, Haruna Iddrisu, MP for Ketu North, James Klutse Avedzi and MP for Asawase, Alhaji Mohammed-Mubarak Muntaka respectively who have been at the helm of affairs of the minority since January 7, 2017.

Current First and Second Deputy Whips, MP for Banda in the Bono region, Ahmed Ibrahim and MP for Ada in the Greater Accra region, Comfort Doyoe were however maintained respectively as members of the minority caucus front bench.

Who is Governs Kwame Agbodza

The new Minority Chief Whip, MP for Adaklu, who hails from Adaklu – Kordiabe was born on September 22, 1973 and had his secondary education at Mawuli School in Ho.

He had practical architectural experience in Ghana and the UK and is still a practicing architect.

Prior to entering Parliament in 2013, the new Minority Chief Whip worked as Managing Director of SouthWorld Technical Services, Chief Executive Officer of Architect Co Partners and Kay and Partners.

The vociferous Adaklu lawmaker is known for his punctuality to the floor of Parliament and is an advocate for time consciousness on the part of his colleague lawmakers to serve as an example to their constituents.

He has variously received commendations from both former Speaker of Parliament, Prof Aaron Michael Oquaye and the current Speaker Alban Kingsford Sumana Bagbin for his punctuality to parliamentary duties.

Mr Agbodza who is currently the Ranking Member on the Roads and Transport committee and is also a member of the Science, Environment and Technology Committee of Parliament.

The 49 year old Kwame Governs Agbodza also has eye for detail and dutifully scrutinises agreements, contracts and bills that are submitted to parliament for ratification to ensure value for money.

He has always exposed excesses in government spending in the infrastructure sector of the economy and an ardent advocate that value for money audits on projects are attached to governments proposals and agreements that are submitted to parliament to help enhance parliamentary oversight over the executive who controls the public purse.

Mr Kwame Agbodza is expected to bring his rich experiences in the built environment to bear in his new role even as he relies on his punctuality to whip his colleagues from the minority caucus to toe the NDC party line in the next two years as the 2024 general election draws near.