Will you ride in a palanquin to NAM-1 or Ataa Ayi's father's funeral? 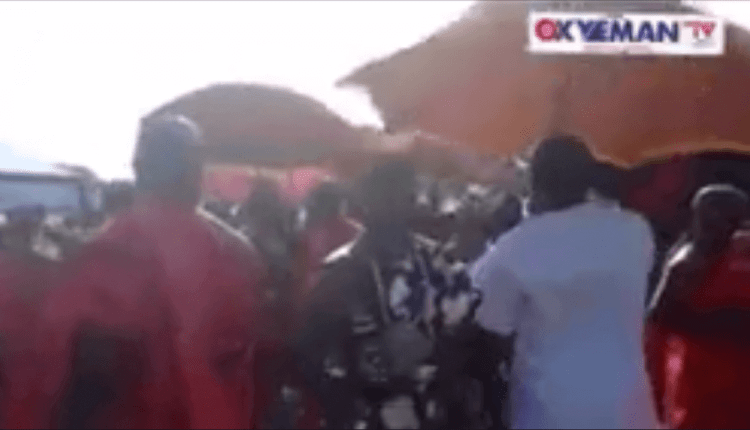 Recently the Okyehene attempted to drive in a convoy of horn tooting vehicles to La during the annual ban on Drumming and Noise making but had to abort that unreasonable provocative mission because he was told the consequences of such an act.

Gabby Asare Ochere-Darko subsequently sponsored a front page Article in Nana Akufo-Addo’s Statesman newspaper titled “Niimei’s VISA to Accra” insinuating that nobody needs to respect the culture of the people of Accra.

For those who pride themselves in their Culture, Customs, Traditions and revere their Chiefs to do the opposite in other jurisdictions can only mean disrespect or an open invitation to violent reaction or confrontation.

The funeral of the father of Joseph Siaw Agyepong witnessed yet another incident of grave disrespect which was promptly stopped by the Ga Chiefs and Asafoatsemei present.

The Ga People are generally very HOSPITABLE; but can be HOSTILE if you dare them, the result will be you being HOSPITALISED or even worse…

For someone purporting to be a Chief, sent by his Paramount Chief to go into the jurisdiction of another Paramouncy without prior notification and due courtesy is sacrilege;

For that purported Chief to allow himself to be carried in a palanquin to a funeral ground amid taunting dances claiming to be the Over-Lord or owner of the Land is to be courting his own funeral.

The Zoomlion Funeral at the Forecourt of the State House but for the intervention of the bereaved would have seen the re-enactment of the KATAMANSO WAR.

If you use the Media to systematically erase the Ga Language in Accra;

If you abuse the Education Policy on the use of Local Language as medium of instruction in Accra to eradicate the Ga Language in Accra schools;

THEN STEAL PRIME STATE LANDS TO ENRICH YOURSELF USING THE STATE…

Many were made instant millionaires because they were fraudulently allocated prime Accra Lands.

Plot number 14 of the Ambassador Hotel Planning Scheme was on Christmas eve of 2007 fraudulently by President John Agyekum Kufuor to Joseph Siaw Agyepong through his Zoomlion company.

We know how paupers became millionaires in Ghana, so let nobody force us to go further.

We will not be quiet as we are dispossessed of Our Lands, Our Language, Our Culture, Our Customs, Our Heritage and be disrespected too by the very perpetrators.

Strangely, after the recent return of the State Acquired Lands in Ashanti Region by President Akufo-Addo through E.I. 432 which included Lands occupied by the Military and other government institutions;

OccupyGhana should tell Ghanaians whether the Ashanti Lands or the Achimota Forest were acquired after 1993 when the current Constitution came into force and if not, what they are going to do to reverse the return of those lands?

Indeed, if government needs more Lands to develop, is it only in Accra that government wants to have those developments or other regions of Ghana also require developments and therefore government should be Compulsorily acquiring Lands in the others regions.

Ultimately they will say “GO TO COURT, go to court” if you want.

However, recent surveys show that Ghanaians have lost confidence in the Judicial system.

Nobody believes both in the Bench and the Bar.

The interpretation of the Constitution by the Supreme Court, which is by default is deemed to be law, is not sacrosanct and therefore there is room for review to avoid a travesty of justice.

One interpretation requiring a Judicial Review is the LA MANTSE Nii Kpobi Tettey Tsuru II vs Attorney General judgement which opened the floodgates for the Land Looting.

The interpretation of Article 20 (5) (6) of the Constitution of Ghana regarding the first right of refusal to the Original Land Owners in the event of return of State Lands was in error.

Many government projects (e.g. Agenda 111 Hospital projects) are having difficulty securing Lands because nobody trusts the government to take their lands for a stated project knowing that, such Lands will in future be allocated to private persons or to some wasteful venture (e.g Cathedral) in the future.

Unexplained Wealth and the hiding of proceeds of Corruption and Money Laundering in Land transactions should spur the Special Prosecutor to investigate the cases of Land Looting brought to his attention, including the Cantonments Civil Aviation Land which is the Crown Jewel of Land Looting.

Nobody must be considered a SACRED COW, that is above the law or entitled to the property of others forcibly taken from them by the State.

Ghana is a Unitary State, a Republic whose people are equal without distinction, one people with a Common Destiny under the Laws and Constitution of Ghana.

May God guide us on the above path even as our dear country goes through the most difficult patch in its history.

The Story Of Attah Ameh Oboni – the Nigerian King who Chose Suicide Instead of Bowing to the Queen of England.