The incident reportedly happened on July 20 after the Foase District Police Commander saw three formed police unit officers conducting a motor check on the Atwima Yabi-Dida stretch in the Atwima Kwanwoma District of the Ashanti Region. 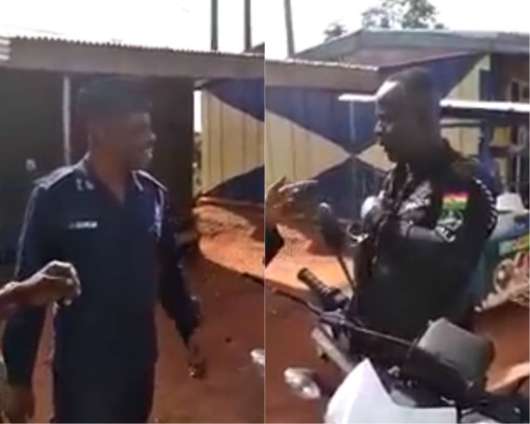 A viral video of two policemen in a heated altercation has raised serious concerns on social media.

In the video an officer who gave his name as Cpl Boakye from the Formed Police Unit, engages in an argument with Foase District Police Commander, Supt Albert Quansah.

The incident reportedly happened on July 20 after the Foase District Police Commander saw three formed police unit officers conducting a motor check on the Atwima Yabi-Dida stretch in the Atwima Kwanwoma District of the Ashanti Region.

Supt. Albert Quansah then cautioned the officers against the exercise.

It has been widely reported that Corporal Boakye felt offended and refused to listen to the police commander and engaged in an argument with him.

Cpl Boakye when questioned by the District Commander to provide his service number, he responded “meet me at FPU, meet me there you were not the one who brought me here”.

The Ghana Police Service however says its attention has been drawn to the incident adding that, “we wish to state that this incident occurred in the morning of 20th July 2022 and investigations commenced into it that very day”.

“We would like to assure the public that the due internal disciplinary process of the Service is being applied in dealing with the matter”, the statement signed by Chief Superintendent Grace Ansah-Akrofi, the Director General at the Public Affairs Unit stated.

GOT A STORY? Share with us. Email: [email protected] or [email protected] WhatsApp: +233(0)244822034
Ashanti RegionAtwima Kwanwoma DistrictAtwima Yabi-Didaexchanging wordsinvestigationsPolicepolice officersPublic
0
Share FacebookTwitterWhatsAppTelegram
Subscribe to our newsletter
Sign up here to get the latest news delivered directly to your inbox.
You can unsubscribe at any time