The GaDangme Youth did not target President Kufuor or any other Future or Former President based on Tribe, but rather indicated specifically that any State Acquired Land allocated for a retirement accommodation must not become FREEHOLD PROPERTY 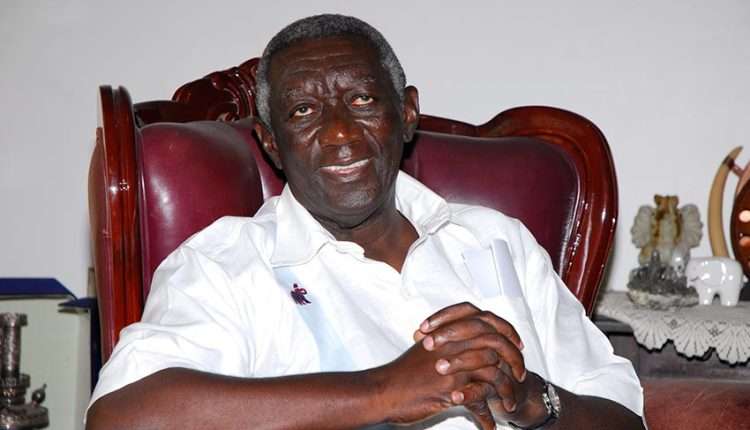 My attention has been drawn to Falsehoods and outright LIES recently peddled by Former President John Agyekum Kufuor which require the following responses;

FALSEHOODS:
1. According to Former President Kufuor, “some unknown persons wearing red bands on their heads” stopped him from being given State Accommodation and Office as part of his End of Service Benefits.

The attempt to depict the good citizens of Ghana who stopped him as a Sitting President from misappropriating prime State Lands to himself and his cronies, as some faceless unruly thugs must be debunked.

The group he [Former President Kufuor] refused to name is the GaDangme Youth of the GaDangme Council, the group that stopped him was led by me, Prince-Derek Adjei.

2. According to Former President Kufuor, the GaDangme Youth who stopped his being allocated State Land, told him to go to his hometown, Ashanti Region.

Another outright KUFUOR LIE that must be debunked.

The GaDangme Youth did not target President Kufuor or any other Future or Former President based on Tribe, but rather indicated specifically that any State Acquired Land allocated for a retirement accommodation must not become FREEHOLD PROPERTY;

This was in reaction to President Kufuor putting a State Acquired Land in his End of Service Benefits.

The GaDangme Youth demanded that such State Acquired Lands must revert to the State or the Original Land Owners after the death of the beneficiary Former President, if it was not to be re-allocated to another Former President for the same purpose.

3. According to Former President Kufuor, the prime Accra State land was being given to him as part of his Emoluments.

President Kufuor was actually attempting to give the prime Accra State land to himself whilst he was still President rather than waiting for his successor to implement the Chinerery-Hesse Committee Report.

The GaDangme Youth stopped him and categorically stated that President Kufuor cannot have the prime Accra State Land as a FREEHOLD PROPERTY to pass on to his Children when he dies;

Indeed, the GaDangme Youth stated categorically that the Rawlings’ Ridge Residence which is a State Bungalow on Stool/Family Land, must revert to the State or be returned to the Original Land Owners after the death of Former President Jerry John Rawlings.

Additionally, all Former Presidents retire on their salaries and recieved other Allowances and benefits till death.

Presidents and  Former Presidents do not pay taxes and their spouses also get allowances from the State for life.

The reason President Kufuor gave for taking the prime Accra State Land as part of his Emoluments as FREEHOLD PROPERTY to will to his children is therefore untenable.

President Kufuor claimed that he needed the prime Accra State Land for accommodation as FREEHOLD PROPERTY to prevent his children becoming destitute [homeless] when he could afford to buy and build to avoid the Chiefs and People of Accra rather becoming destitutes on their own land…because on the contrary, the original Land Owners and their children were being made destitute [homeless and landless] on their own land by the fraudulent allocations of State Acquired Lands to high profile personalities FOREVER.

Hundreds of high profile personalities and institutions were compromised in the fraudulent State Land Allocation;

Between 2004 and 2008 several International institutions including Embassies and Ambassadors, Civil Society Organisations, prominent Statesmen and Chiefs were on the long list of “Land Looters” carefully selected to thwart any efforts of the Original Land Owners to seek JUSTICE and the return of their Lands.

2. President Kufuor compromised the Judiciary, Parliament, the Executive and the Ghana Police Service by allocating prime State Acquired Lands to their heads and several members at ridiculous prices.

E.g. Speaker of Parliament Rt. Hon. Ebenezer Begyina Sekyi Hughes, Chief Justice Georgina Theodora Woode and Inspector General of Police P. K. Acheampong together with some members of Parliament and the Judiciary including the next Chief Justice Sophia Akuffo who paid GHc7000 for prime Cantonments State Land worth millions.

The Ghana Police was motivated to harass the Original  Land  Owners if they went on Demonstration.

E.g. During the “Yaabi Onye Demonstration” the Ghana Police Service was deployed and ordered to stop the GaDangme Chiefs and People at the Independence Square.

Some of the intelligentsia who participated in the “Yaabi Onye Demonstration” including Justice V. C. R. A. C. Crabbe, Prof. Atukwei Okine, Ambassador K. B Asante, Dr. Josiah, Lawyer Bright Akwetey and several others were sprayed with hot water by the Ghana Police at the 28th February Crossroads leading to the Osu Castle where they were to present a petition to President Kufuor who had refused refused to meet them over their request for the return of their Lands, the Ada Songhor Salt, issues of their Language, Traditions, Customs and Heritage.

It must be placed on record that President Kufuor allocated prime La Lands to some Chiefs;

President Kufuor also allocated some prime Kumasi Lands exclusively to Ashantis in his government, at the same time of the fraudulent allocation of State Acquired Lands in Accra were done indiscriminately and for a pittance.

In 2007, as part of the [email protected] activities, President Kufuor forcibly took over prime Accra Lands at Cantonments and Ridge amid demonstrations led by the Chiefs [La Mantse], claiming to build accommodation for visiting Heads of States coming for Ghana’s Golden Jubilee celebrations.

This turned out to be another KUFUOR LIE, as no single visiting President was accommodated in any of the [email protected] mansion which were rather fraudulently allocated or sold cheap to cronies thus depriving the Original Land Owners of their Lands.

Indeed, the remaining portion of the Cantonments Lands originally acquired by the State for the Civil Aviation Authority purposes which was looted by President Kufuor in the name of [email protected], is currently being looted by State Actors and Chinese nationals whiles Samuel Abu Jinapor looks on sheepishly.

President Kufuor, as a lawyer knows that as a Trustee he cannot [neither personally nor through persons connected to him] benefit from the trust property or State Acquired Lands;

CSOs such as the pro-NPP Institute of Economic Affairs [IEA], his family members [e.g. J.H. Mensah], his cronies in the NPP and some through their companies [e.g. Zoomlion] were made instant Millionaires by President Kufuor giving them prime Accra State Lands.

President Kufuor must confirm or deny, if he has not since been given a Private Office by the Government of Ghana near the Rawlings Ridge Residence.

President Kufuor must also confirm or deny, if he did not specifically demand that the Lands he was taking through the Chinerery-Hesse Committee Report as his End of Service Benefits was to become FREEHOLD PROPERTY that he can put in his will just like Sir John did.

President Kufuor wanted to be able to give the prime Accra State Land to his children and their children’s children FOREVER.

President Kufuor must confirm or deny, if he did not give Ivor Agyeman Duah of the Kufuor Foundation fraudulently State Acquired Lands together with his Cabinet Secretary Mr. Mpare, Dan Agyeman, Sam Jonah, Yaw Osafo Marfo, Dr. Wereko-Brobbey, Nana Kweku Duah and many others…

The GaDangme Youth were asking President Kufuor, IF EVERY STATE ACTOR WAS TO ANNEX A PIECE OF ACCRA LANDS FOREVER, where will the Chiefs and People of Accra, SPECIFICALLY LA whose lands have been the most looted be giving to their descendants?

Ghanaians are demanding as Citizens and not Spectators that;

All State Acquired Lands fraudulently allocated to private persons be immediately reversed, retrieved and returned to the State or the Original Land Owners.

The State must take steps for the orderly retrieval and return of these State Lands or risk a sacking of the high profile State Sponsored Squatters like Justice Sophia Akuffo without any further warning from the fraudulently allocated Lands in their possession.

Prince-Derek Adjei
Former President of the GaDangme Youth, LA ROYAL and a Citizen of Ghana.