“Crazy how I had it on my mind from then and still missed it [face palm emoji] but all the same Rest in Peace Grandpa. May the almighty keep you safe [prayer emoji],” 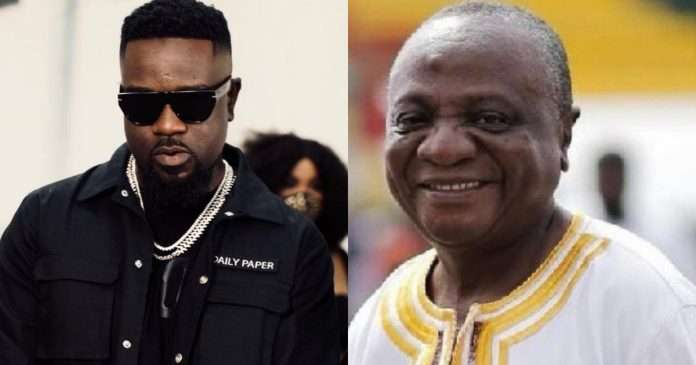 Rapper Sarkodie has expressed regret for not attending the funeral of the late Nana Kwame Ampadu.

The SarkCess Music founder made his regrets known on Facebook on Sunday, 9 October 2022.

According to him, he had been informed about the funeral arrangement a week prior by Ghanaian creative arts star David Dontoh but it slipped his mind.

“Ashamed and hurt for not making it to the Legend Nana Ampadu’s funeral,” Sarkodie said.

“Uncle David Dontoh told me about it last Sunday,” he noted.

“Crazy how I had it on my mind from then and still missed it [face palm emoji] but all the same Rest in Peace Grandpa. May the almighty keep you safe [prayer emoji],” the ‘Brighter Day’ hitmaker prayed.

“No excuse makes sense to even myself missing all these legends funerals. Need to do better [pleading or prayer emojis],” the rapper self-flagellated.

Crowned the ‘Ndwontofoohene’ or ‘King of Singers’ in 1973 after winning a nationwide competition, Nana Ampadu died on Tuesday, September 28 2021 at the Legon Hospital in Accra after a short illness.

A day after his death, Sarkodie revealed on social media that the deceased music legend used to give him sound counsel and had one time advised him against sharing personal matters on social media.

The two apparently have a song today which is yet to be released.

One Friday, 7 October 2022, hundreds showed up at the forecourt of the State House to pay their last respects to the music icon during a state funeral which was attended by dignitaries such as the Speaker of Parliament Rt Hon Alban Bagbin, the Minister of the Interior Hon Ambrose Dery, the Chief of Staff Akosua Frema Osei Opare, former First Lady Nana Konadu Agyeman-Rawlings, and H.E. President Nana Addo Dankwa Akufo-Addo who noted the outpouring of grief following Nana Ampadu’s demise is testament to how dear and impactful he was to the music industry in Ghana.

He is survived by a wife, Madam Joyce AB Frimpong, 24 children and 30 grandchildren.