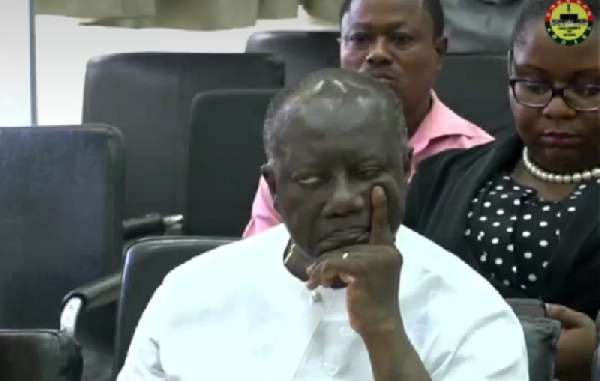 However, the committee, co-chaired by New Patriotic Party (NPP) Member of Parliament for the Adansi Asokwa constituency, Kobina Tahir Hammond, and the National Democratic Congress (NDC) Member of Parliament for the Bolgatanga East constituency, Dr. Dominic Akuritinga Ayine, could not rule out politics, confusion and animosity right from the word go.

The motion was filed by the Minority Leader, Haruna Iddrisu who is also the NDC MP for the Tamale South, and Chief Whip, Alhaji Muntaka Mohammed- Mubaraka (NDC MP Asaroase).

Present at the committee sittings were the Minority Leader and the Minority spokesperson on Finance, Cassiel Ato Forson in the witness box. In attendance were the Minister, his deputies, technical team and his lawyer, Gabby Asare Otchere-Darko.

The hearing started an hour into the scheduled time. Co-chairmen after giving the reasons for the meeting were not sure of how to address Hon Haruna and Ato Forson – accusers , proponents, witnesses, movers of the motion or what?

Finally they settled on proponents of the motion. Also in contention was the nomenclature of the issues raised in the motion – accusations, assertions allegations, grounds, charges or what? All the same these were used interchangeably.

It was after a long deliberation by members as to the way forward for the committee meeting before the witness, movers of the motion were sworn in.

Meanwhile, many varying views have been given by some MPs regarding the motion and the sitting of the committee, whereas some see it as a set back to over-sight responsibility of Parliament, others see it as a serious infraction. They opined that there should not have been any such committee at all. This school of thought hold that the findings or otherwise of the committee will come to naught.

Also, debate at the sitting was pregnant with political under tones as members from the political divides showed their political stands on the matter.

Council for the minister contended that some of the accusations in the motion were criminal in nature and that the committee was not the appropriate forum to discuss them. He held the view that CHRAJ was the best place.

He also maintained that his client was not only afraid to appear before CHRAJ but was capable of defending himself before it. He subsequently asked for 48hrs to enable his team study documents presented to them for their response.

Members then agreed that the next hearing of the committee which is a response from its minister and his team will be on Friday, November 18, 2022.