STATE LANDGRAB: Public Enquiry must be Independent and Comprehensive… 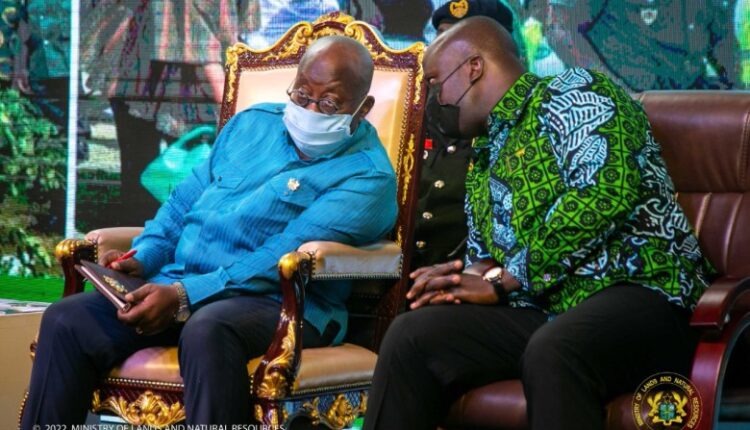 ALL LANDS IN GHANA must be Compulsorily acquired by the State, without compensation and no possibility of return to the Original Land Owners!

RETURN ALL STATE ACQUIRED LANDS which are not being used for the original purpose of acquisition, compensation unpaid or allocated to third-party; after a properly instituted Commission armed with all relevant documents have established the rightful owners and the actual size of Lands to be returned as conceived by the framers of the 1992 Ghanaian Constitution and others before it…

It was confirmed on the Joy Newsfile programme on Saturday hosted by Sampson Lardi Anyenini that Government did not do due diligence on the people it was planning to return the Achimota Forest Lands to, and that the purported basis for President Akufo-Addo secretly signing away the Achimota Forest Lands was flawed in Law and not backed by any proper documentation nor even a coherent policy…

Samuel Abu Jinapor who was on the show via Zoom could not coherently defend the fatally flawed Achimota Forest E.1. 144 and E.I. 154 which resembled the fraudulent Ameri-Novation Executive ORDER by President Akufo-Addo, which was but for the vigilance of Minority MPs would have led to stealing of almost $1billion leading to the sacking of the Energy Minister Boakye Agyarko who he claimed had misled him.

“Will Samuel Abu Jinapor be sacked or will he be forced by Ghanaians and Civil Society to resign?”

The Lands Ministry, the Lands Commission and the Forestry Commission cannot be allowed to investigate themselves in the Forest Landgrab or any other Scandal in which they are complicit.

The growing calls for an Independent Public Enquiry not limited to the Achimota Forest Lands but rather a comprehensive to cover All Looted State Lands must be preceded by the removal from office by dismissals, resignations and interdictions of all officials who may interfere in the investigation or capable of a cover-up, falsification or destruction of documents…

It has emerged that the Government of Ghana was part of the perennial Owoo Family Scam; carving portions of the Achimota Forest Lands by a scheme of Creating, Looting and Sharing with phantom members of the Owoo family…

Recall how the President’s hairdresser, some family members and friends were handed Ghana’s Electricity Company assets worth billions without putting in a present but rather took the Prepaid monies of Ghanaians and despite the fraud, nobody has been arrested, investigated or prosecuted nor has the Prepaid monies they took returned?

“Recall how President Kufuor did exactly what Sir John is being accused of on a grand scale by the fraudulent allocation of State Lands and Bungalows to hundreds of family members, colleagues in Government, his appointees, friends and business associates?”

Newsfile Fallouts:
Sampson Lardi Anyenini and his lawyer friends could never refer to, nor comment on the massive Looting of State Lands because of the involvement of many lawyersand Judges including Supreme Court Judges two of whom were Chief Justices…

The Hypocrisy of Sampson Lardi Anyenini and his OccupyGhana friends in not calling out the living Land Looters including Sophia Akuffo (JSC) and Georgina Woode (JSC) but calling for the prosecution of a dead man, betrays the dishonesty of many when it comes to the discussion of Accra Lands.

That some bigots can actually suggest that Accra Lands once taken must never be returned so the GaDangme or Ga people can be rendered Landless and destitute, is pathetic.

“Perhaps, ALL LANDS IN GHANA must be Compulsorily acquired by the State, without compensation and no possibility of return to the Original Land Owners!”

Ashanti, Akyem, Dagomba, Ewe, Fanti indeed every Ghanaian everywhere must enjoy the same justice or suffer the same injustice being proposed for the Ga and Dangme people; afterall, GHANA IS ONE NATION, ONE PEOPLE WITH COMMON DESTINY.

All State Acquired Lands and Property belongs to all Ghanaians not the friends and family of any President or cronies of any government.

The rational behind the above and international agreements requiring prior Parliamentary approval is to reduce risk of secret sweetheart deals, introduce greater transparency and public participation in these acquisition and dissipation of public funds and property.

The list of beneficiaries of the fraudulently allocated State Lands and Bungalows under President John Agyekum Kufuor which were expected to be reversed by President Akufo Addo as requested in Sophia Akuffo Article 146 Petition in the manner in which President John Evans Atta-Mills reversed the International Students Hostel Land Looting as requested in the Georgina Woode Article 146 Petition; is available to the Special Prosecutor.

Why President Akufo-Addo refused to act on the Sophia Akuffo 146 Article Petition in breach of the 1992 Constitution and his oath of office, is no longer in doubt.

Why Sampson Lardi Anyenini and his OccupyGhana friends have decided not to talk about the long Landgrab List attached to the Sophia Akuffo Article 146 Petition but pretend to be angry at Sir John’s will, is also obvious

“Hypocrisy, Dishonesty and Cover-up for people they revered…”

NEILS TROOST: One of Africa’s finest and most reliable Investor!