Tema: Vulture Population in Extinction Due to High Consumption of the Meat

Poisoning accounts for more than 60% of vulture mortalities, especially in East and Southern Africa. Vultures may be deliberately targeted, or consumed, poisoned bait intended to kill lions or other livestock predators. Meanwhile, in West Africa, killing of vulture for belief-based use (for example traditional medicine) is prevalent, according to Birdlife International 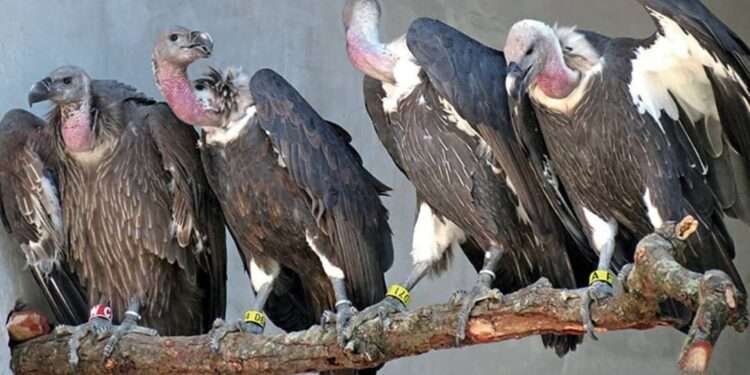 In recent times, vulture populations across Tema metropolis have declined drastically, a situation Environmentalists have described as very dangerous due to their (vultures’) relevance to the environment .

Vultures, according to Experts are magnificent birds, often called ‘nature’s clean-up crew’, because of their vital role in the ecosystem in cleaning up carcasses and organic waste from the environment.

This singular role by Vultures according to WHO helps to limit disease transmission from animal carcasses to humans and other animals.

Poisoning accounts for more than 60% of vulture mortalities, especially in East and Southern Africa. Vultures may be deliberately targeted, or consumed, poisoned bait intended to kill lions or other livestock predators. Meanwhile, in West Africa, killing of vulture for belief-based use (for example traditional medicine) is prevalent, according to Birdlife International

However, in the Tema Metropolis, vultures are now in danger of extinction, making the decline of vulture population in the Metropolis a very serious one.

This revelation was occasioned by a survey conducted by senaradioonline.com to find out the causes of vulture extinction or decline in the Metropolis.

My first point of call was the Tema Abbatoir where vultures normally trooped to feed on carcasses. But to the dismay of the Reporter, the vultures found at the time could be counted as opposed to thousands of them found in time past at the same place.

Mr. Salifu Ishahaku of Tema Abbatoir told senaradioonline.com the birds hardly throng the Abbatoir as they used to which is indicative that indeed the birds are in extinct.

“At first they come here plenty. We give them intestines and rotten animals and they feed on them. Now they dont come again”, Ishahaku Salifu said.

At the Kpone refuse dump, a resident , Nana Agyemang confirmed to us that the birds are trapped by some people purposely for consumption, hence their extinction in the Metropolis.

He added that the consumption of the birds coupled with the fact that rotten things are no longer found at the refuse dumps are the main reason for their extinction.

The news team later visited chop bars within the Tema Metropolis where it was revealed by many of the operators that, some customers surreptitiously ask them whether they have vulture meat.

According to Auntie Serwaa, owner of a chop bar in Tema site 6, such demands for vulture meat keeps coming and anytime she asks them why they need vulture meat , some say it’s good for fortification.

“There was one guy who said vulture meat is very cheaper than the rest”, Auntie Serwaa said.

This startling revelation has further emboldened the perception that there is high demand for vulture meat as its consumption has soared drastically.

Ghana ripe for FDIs and FPIs – Director General of SEC