THE CHURCH, PULPIT & CASSOCK: A shameful shield against corruption and wrongdoing?

In Ghana today, it is apparent that the safest escape for any thief is to profess to be a Religious Leader, Rev, Bishop, Pastor, Evangelist... 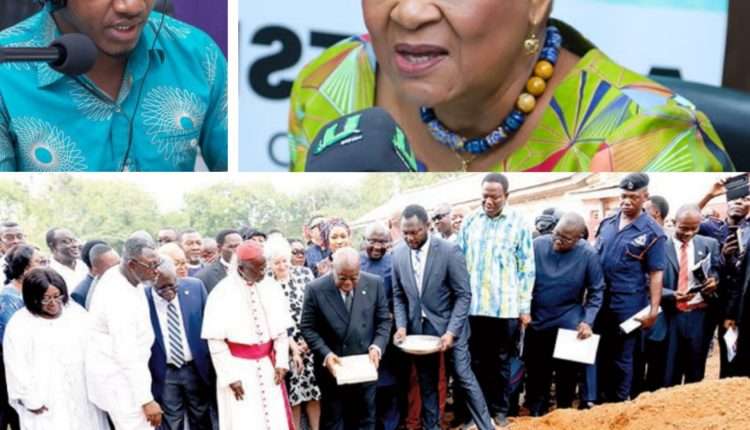 Umaru Sanda is noted for his piercing questioning which sometimes is mistaken for being disrespectful;

Umaru Sanda allowed Rev. Joyce Aryee to dodge all questions about the resignation letter of Archbishop Dag Heward-Mills and his letter that gave an insight about the maladministration, governmental control of the Cathedral Project and the obvious Trustees being just a front.

In Ghana today, it is apparent that the safest escape for any thief is to profess to be a Religious Leader, Rev, Bishop, Pastor, Evangelist…

Pastor Mensa Otabil, was the first to exit the Board of Trustees of the Cathedral;

Pastor Mensa Otabil before his appointment to the Board of Trustees of the Cathedral was the Chairman of the Board of the Capital Bank.

Rev. Victor Kusi-Boateng also known as Kwabena Adu Gyamfi doubles as Secretary of the Cathedral Board of Trustees, and Owner of the GHC500 Crèche that loaned the controversial GHc2.6million to the Cathedral Project after receiving GHc2.5million of public funds from the Comptroller and Accountant General ‘for apparently no work done’…

Interestingly, the same Comptroller and Accountant General had delayed funds meant for the Cathedral Project mobilisation and only paid after the Crèche-Cathedral Loan deal which appears to be a classic case of money laundering, insider-trading, conflict of interest, Corruption and Manifestation of obvious maladministration and casual behaviour of the Board of Trustees of the Cathedral.

Was the Rev. Victor Kusi-Boateng Crèche licenced to give LOANS?

Has the Cathedral through its fundraising activities recieved money from shady sources [e.g. LGBTQI Community] as speculated but was not denied by the Cathedral?

When will the Cathedral Project and its Fundraising be audited?

How come the controversial Limited Liability Company registered to own property of the Cathedral and oversee the financial arrangements of the Cathedral does not include some Trustees [e.g. Archbishop Dag Heward-Mills] but other non-Trustees?

In whose name is the PRIME CATHEDRAL PROJECT LAND TITLE CERTIFICATE and other documents registered?

The President and the Board of Trustees must immediately answer the LAND OWNERSHIP matter as relates to the Cathedral Project.

The Cathedral Project cannot be allowed to become a conduit for money laundering, siphoning State Funds and Land Looting.

Unfortunately the Christian Council and Church leaders are not for the Church nor Ghanaians but themselves.

Two Church leaders who are appointees of President Akufo Addo on the VRA Board, Joyce Aryee and Ben-Smith recently despite the country’s bankruptcy and suffering of Ghanaians, pledged their support for the President’s intransigent position of building his Cathedral at all cost…

The Chairman of the Cathedral Board of Trustees, Apostle Prof. Opoku Onyinah also claimed that the Cathedral will be built with funds raised from their congregations made up of the same suffering Ghanaians he claimed did not understand the Cathedral Project and must shut up and pay up…

Citi FM’s Reverend Stephen Yenusom Wengam, Lead Pastor of Cedar Mountain International Church in Accra who was recently elected General Superintendent of Assemblies of God, Ghana is the latest to pledge support for the building of Akufo-Addo’s Cathedral.

The Christian Council yesterday indicated that it wants the Debt Exchange Programme halted not because they support Individual Bondholders but because they are worried about THITES & OFFERTORY reducing due to effect of the domestic bond haircut on their congregations not necessarily Ghana or Ghanaians at large.

WHAT EXACTLY HAS ARCHBISHOP DAG HEWARD-MILLS WRITTEN ABOUT THE CATHEDRAL?

Church owners or leaders cannot control our destiny and must be subject to the Laws and Constitution of Ghana.

God Save Our Homeland Ghana and help us survive the WASTED YEARS OF THE AKUFO-ADDO-BAWUMIA Government and their DumbDogs who can’t speak truth to power because they are compromised or complicit or corrupt.