The President in whom all Executive Power is vested, has no excuse for not exercising the power to stop Corruption, Galamsey, Land Looting, Salt and Sand Winning thereby threatening the lives of Ghanaians and Ghana's very existence. 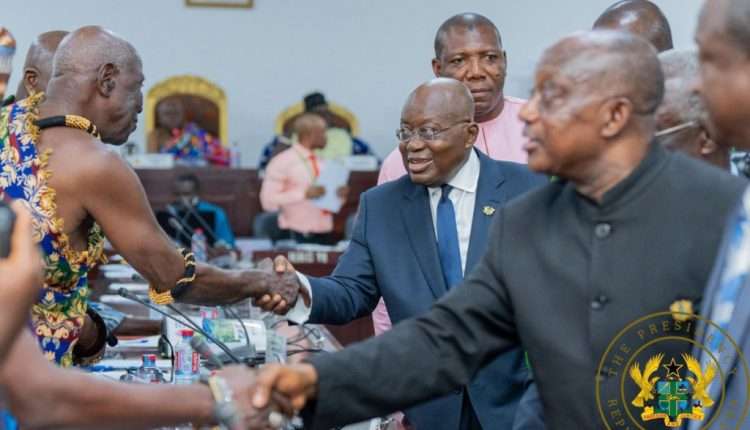 Is it the Chiefs or Government and therefore the President?

Is it Parliament that represents the People that is not exercising sufficient oversight or THE JUDICIARY which IS UNABLE TO DISPENSE PURE 100% JUSTICE because some of its own are corrupt, compromised or complicit?

Unfortunately, Civil Society and the Media have failed in their watchdog role and instead become DUMBDOGS.

This was the status quo until recently when AriseGhana shook Ghana and awakened a few including the President’s friends in OccupyGhana.

The People are the Sovereign from whom all Executive, Legislative and Judicial Power emanates…

The President in whom all Executive Power is vested, has no excuse for not exercising the power to stop Corruption, Galamsey, Land Looting, Salt and Sand Winning thereby threatening the lives of Ghanaians and Ghana’s very existence.

President Akufo-Addo according to many including the Asantehene, Civil Society, Media and Parliamentarians has failed and has become the biggest enabler of Galamsey, Corruption, the Plundering of the Public Purse, the Looting of State Lands, Salt and Sand Winning.

President Akufo-Addo could have chosen to go to Bawku but chose to go to Kumasi.

President Akufo-Addo is not in Kumasi to meet with the Asantehene who had blamed his lack of seriousness for the upsurge in Galamsey nor to ensure that the NPP Regional Chairman is arrested for his role in the Akonta Mining Galamsey activities in the forest reserve.

President Akufo-Addo is in Kumasi to meet the National House of Chiefs to talk-talk and talk rather than take decisive action as demanded by Ghanaians and even his OccupyGhana friends.

Ghanaians would have been best served, if President Akufo-Addo had rather gone to his hometown, reputed to be “the Galamsey Capital of Ghana” to see firsthand the flooding caused by the diversion of rivers and water bodies by Galamseyers and ensure the arrest of all involved in Okyehene’s Galamsey Vigilante shooting spree last week.

The effects of Galamsey is worst in the Western Region, Eastern Region and Ashanti Region but gradually being felt in other regions as flood waters carry the toxic chemicals and polluted water, as Ghana’s Cocoa is rejected on the international market, as the forest degradation changes rainfall pattern and food shortage causes food inflation driving the country’s overall inflation.

Chairman Wuntumi and the Chinese Galamseyers together with some DCEs and Chiefs dominate the Galamsey business in the Ashanti Region.

Hon. George Mireku Duker, DCE Bonzoh, Ekow Ewusi are very prominent in Western Region Galamsey equation in which lately has Mr. Antwi-Boasiako [Chairman Wuntumi] and his Akonta Mining Company’s Galamsey activities and the Chief caught Mining in his own bedroom adding to the mix.

The ENABLER-President Akufo-Addo pretends not to be aware…

The ENABLER-President Akufo-Addo’s refusal to investigate and prosecute Prof. Frimpong-Boateng and Charles Bissiu who were the Chairman and Secretary of his Cabinet’s Interministerial Anti-Galamsey Task force caught on tape actively undermining the fight against Galamsey;

The ENABLER-President Akufo-Addo is pretending not to be aware of the PartyuNuHiaSika Excavator Scandal.

The ENABLER-President Akufo-Addo’s decision to stop the prosecution of Aisha Huang as articulated by Yaw Osafo Maafo and his not being on top of the Galamsey fight made everybody believe the whole talk about fighting Galamsey is a scam to allow a few to make money while pretending to be fighting Galamsey.

The occasional burning of Changfan gold-washing machines and spoilt Excavators does not impress anybody.

The NPP National Women’s Organizer, Kate Gyamfuah has even been awarded a judgement debt for the illegal burning of her Mining equipment, yet nobody has been punished for the financial loss to the State.

The ENABLER-President Akufo-Addo who is the Commander-in-Chief of the Ghana Armed Forces pretends not to be aware of the viral video showing Men in Ghana Armed Forces uniforms seen guarding Chinese Galamseyers in the forest with the support of members of his Delta Force vigilante group.

The ENABLER-President Akufo-Addo who is the Chairman of the National Security Council, thus pretends not to be aware of the Okyehene’s Galamsey Vigilante group that went on a shooting spree in the streets of Akyem Abuakwa, his hometown and former Constituency where he was the Member of Parliament for twelve (12) years

Ghanaians are demanding that the President applies the law in the case of the Okyehene’s Galamsey Vigilante group as a deterrent to others from forming Private Army or Militias or Vigilante groups.

FLOODS:
Whereas the Bagri Dam spillage has caused flooding in the Northern Region, Savanna Region and Upper East Region.

Galamsey and rainfall have caused flooding in the Eastern and Greater Accra Region.

Most of Ghana’s Rivers and Water Bodies are polluted, most rivers and water bodies flow into the sea…

River Densu like other rivers in Ghana is polluted, as one flows into the other carrying its pollutants along till it empties into the Sea.

The flood and the rescue efforts has exposed the ill-equipped so-called “Specialized Security Personnel ” comprising Military and NADMO and Ghana’s lack of preparedness for any serious disaster.

The flood was worsened by the Sand Winning and poor dumping of refuse in the area.

Salt Mining at Pambrose and the acces to the sea further compounded the flow of water from the wet Lands that have become communities.

The ENANLER-President Akufo-Addo’s continued pretence not to be aware of Land Looting and Salt Mining cannot include the Executive Instrument he personally signed in November 2020, purporting to give the entire Ada Songhor Salt and Lagoon to McDan through Electrochem.

Ace Ankoma’s beloved Akyem Achiasi village has not been spared…

OccupyGhana is adding its voice to calls for a State of Emergency to be declared in Galamsey areas but not the arrest and prosecution of all perpetrators accomplices and Enablers.

Enablers only have to pretend not to be aware of anything;

God Save Our Homeland Ghana and help us survive the WASTED YEARS OF THE AKUFO-ADDO-BAWUMIA.