…Residents of Navrongo fume over Strange Street Names in the Metropolis 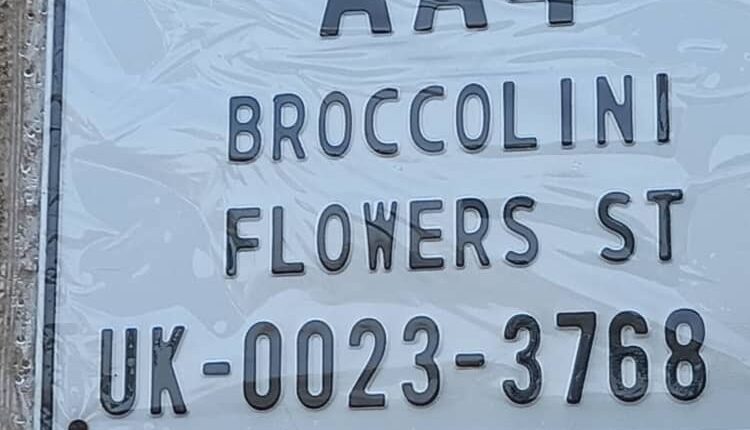 The sudden pop up of embossed plates with foreign and unfamiliar names on the streets of Navrongo have agitated residents with fuming anger. On a portion of the once straight branching road from the back of Navro-pio’s Palace leading to Our Lady of Seven Sorrows Catholic Minor Basilica, houses after the New Market now bear Broccolini Flowers as the street name.

The road has suffered serious encroachment, virtually making it inaccessible to the new market save by snaking through two riverines and tight alleys in between houses, created by default of space previously used for agricultural purposes.

Referring to the new street name  Broccolini Flowers Street, a resident who only gave his name as Adoah, said in Kasem,”We can’t pronounce the name, not to talk of its meaning. We don’t even know what it means.” Another, a lady, also spoke. “They didn’t even ask or consult us before bringing it to us,” Kapuri added, referring to the new street name. Another, asked to what purpose in his opinion will make the local government refuse to consult locals on such an important national exercise with the people, only nodded and said, “I don’t know. I can’t imagine.”

Though not formal, residents familiar to the terrain refer to the locality as Boloo-tiga, a savanna swamp land recently converted into animals and vegetables market. Whereas other residents also prefer to specifically call the road Fari-songo-chonga, the alternative use of Mission Road adds to the confusion, since the link road bridging the Bolgatanga-Navrongo Road to the UDS Campus/Navasco-Navrongo Road passing to or out of the Catholic Church and Mission House, is mainly called Mission Road.

But speaking to an elder of the community who lives on the street, Augustine Kobati said, “This area of Central Navrongo is called Yipugnia-Nogsenia. Our ancestor, Kwonzange first settled here. Had the Kasena Nankana Municipal Assembly consulted us to make input into the national mapping and street naming exercise, we could ask for them to honour our forefather Kwonzange.”

Ending his conversation, Mr Kobati added, that “Apart from Kwonzange, we have names like Katuri, who was a generous clan head and the most wealthiest community leader of this section of Yipugnia-Nogsenia. We have names like Kolo-Nabiina, Koratera, Poonaaba and Kanyeli. Also, my father, Alexis Kaase Kobati, an educationist who rose to become a Head of Department of John Bosco’s Teacher’s Training College in Arts and Culture, a Regional Director of Catholic Education Unit of the Navrongo Catholic Mission, and retired as the Headmaster of Balobia Middle School, is also a strong candidate for honour.”

Speaking on condition of anonymity, a staff of the Fiscal Planning Department of the Kasena Nankana Municipal Assembly confirmed, that the “entire Navrongo Central community was actively engaged in exhaustive and extensive consultations for months, through sponsorship from an NGO” whose name he refused to disclose. “I don’t know why, but when we took delivery of stock of the embossed plates, none of the submitted names from our office appeared on them,” he added.

However, further checks on the embossment contract indicate that the whole process was motivated by pecuniary interest above all other interests. The checks revealed, that before the submission of the local names to begin the process of embossment, Vice-President Bawumia had already given go ahead for a Chinese firm to trigger the process.

The national mapping and street naming exercise was the brain child of Julius Debrah, who was the Honourable Minister of Local Government and Rural Development, at the time. Unlike the National Sanitation Day, another of his [Julius Debrah] initiatives, which procurement inducement package isn’t that substantial as the mapping and street naming project with digitization extras; the former has been abandoned in spite of its monumental benefits in public health and sanitation due to prevalent outbreaks of cholera, malaria and typhoid diseases; just to mention a few.

According to details of the initial process initiated by Julius Debrah, MMDCEs were given a deadline of eight months to submit proposed names for the exercise. They were further recommended to engage with communities and opinion leaders to deliberate on befitting and suitable names at the instance of locals of the particular MMDAs. Gathered sources, however, dispute this process which reasons for curtailment is unclear and none forthcoming.

Meanwhile, the offices of the Fiscal Planning Department of the Kasena Nankana Municipal Assembly is littered with cases of piled imported Chinese embossed plates bearing a variety of such strange and difficult to mention names unrelated to the ancestry, geography and history of the people, as Ghanaians cry for jobs in Ghana. The story is the same in other jurisdictions across the country.

A search through public procurement documents hasn’t confirmed or revealed any such transaction through open tender at the National Procurement Authority. Deriving from this fact, it is evidently apparent, that Vice-President Bawumia’s endorsement for the contract, is embroiled in a huge scandal of circumventing transparent procurement process through open tender bidding.