Why Blame Nana Akufo-Addo over “You Can Vote For NDC”?

If this statement is not defeatist, then it could be direct campaign for John Dramani Mahama (JDM) and his opposition NDC group. 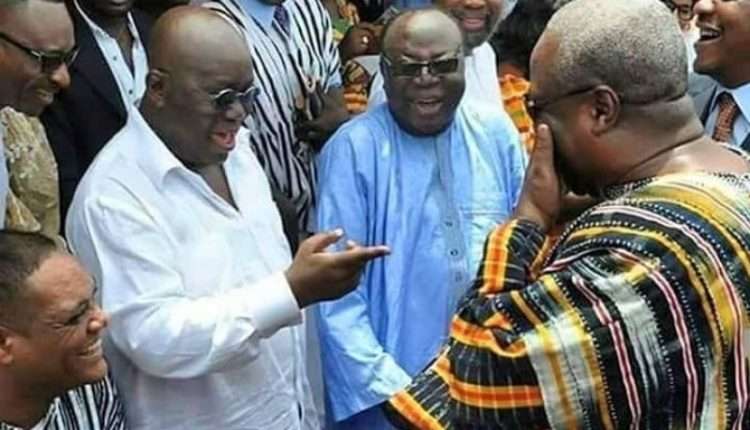 In this regard, Nana’s purported proclamation of “you can vote for NDC” should be seen as one  of those abnormal things in these abnormal days. So why blame him?

If this statement is not defeatist, then it could be direct campaign for John Dramani Mahama (JDM) and his opposition NDC group.

Mahama at the Receiving End

It’s not for nothing that the 1992 constitution enjoins Ghanaians to go to the polls every four (4) years to elect or retain a government upon the assessment of its performance in that period. It is against this background that Ghanaians voted out John Dramani Mahama and his NDC for a better NPP to right the wrongs created by the NDC.

Now six (6) years after Mahama has left the scene, he is still being blamed for the economic mess in which we find ourselves! The question one should like to pose is, “Should this be the case” and if that is the case, why then the change in 2016?

We have the men

Hasn’t it been the much tauted mantra of the NPP “We have the men?” and if six years after the exit an alleged “incompetent” Mahama a “Competent” Nana Addo. Bawumia administration comes in, only to preside over a worse, if not worst economy, why should Mahama be at the receiving end of this situation?

Over The Ban Syndrome

Ghana plays Nigeria in a football match. Captain for Ghanaian side, Asamoah Gyan plays over—the- bar each time he gets the ball to score. The coach then takes off Asamoah Gyan and replaces him with Sulley Muntari. Sule comes and his over the bar shots far exceed Asamoah Gyan’s. When questioned, he answers “It is because Asamoah started it!” does Sule’s answer satisfy the goil- hungry Ghanaian football fans? Just score Sule, now that Asamoah Gyan has been replace by you!

The Bible has cautioned us against judging others because the measurement with which we judge or measure others will be used to judge and measure us.  When the late President John Evans Atta Mills was in control and the economy was wobbling, opposition leader then, Nana Akufo-Addo told him in the face.

“If the economy is broke, fix it!” Now there is no gain saying that Ghana’s economy is in a messand broke. Fortunately for us, we have the compartment Nana Addo – Bawumia administration, with their men of valour at the helm of affairs! So all that Ghanaians need is for them to fix the economy and stop this blame games and post shifting!

Mahama Has No Moral Right?

I personally get sickened when some Ghanaians, especially phone-in callers to radio stations maintain that Ex-President John Dramani Mahama has no moral right talking about Ghana’s economy  because he created a mess of it while in power. But even, if that were the case, do two wrongs make a right? So why this equalization game? Who in Ghana today has more rights, be they moral, justified or otherwise, to talk about Ghana’s ailing economy then Ex-President? More so, when he is being blamed every now and then over the economy six years after leaving left the scene? Or is it the case of “Foxes having holes, and birds in the air having nets but the son of man having nowhere to lay his head?” Talk JDM! Talk on the ailing economy!! Even though your alternatives are often, not only disregarded but also misconstrued by your avowed critics, keep on talking!!!

Christians, Muslims are Brothers; they must Live in Harmony – Apostle Agbalenyoh

MP urges a revisit to FCUBE