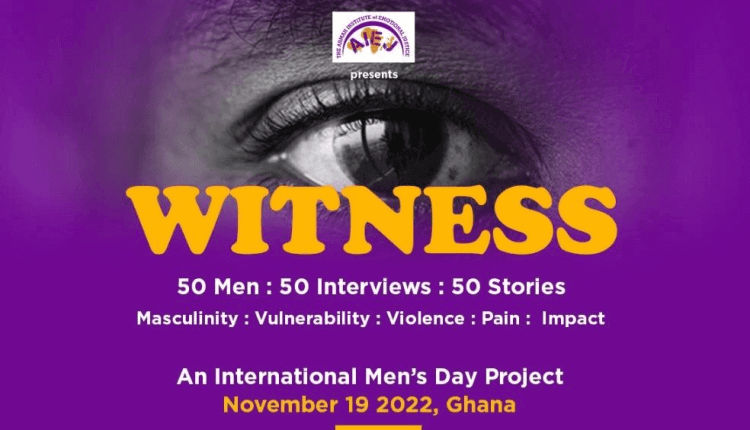 Fifty men from across Greater Accra and Takoradi in the Western Region share, reveal and highlight what violence they witnessed by men towards women, and how what they witnessed shaped and impacted them as men. The findings from the powerful and moving exchanges are for WITNESS, a masculinity project for 2022’s International Men Day, a global annual event celebrated in 70 countries around the world.

This groundbreaking project is by The Armah Institute of Emotional Justice (The AIEJ). It is part of The AIEJ’s annual focus on emotional justice and masculinity where we create sacred space to have open, vulnerable conversations about masculinity, power, and violence to explore, shape and transform masculinity narratives in Ghana.

This masculinity project’s aim is not to pathologize, but to change narratives, shift lens, ignite discussion, and center men’s focus on the actions, learnings and silence of men – all of which contribute to escalating levels of violence against women.

Here is one example of what one WITNESS shared:-

“I remember in my junior high school days I used to bully and beat my female classmates because I thought that beating them will make them respect me.” Witness 1.

Starting on Tuesday November 15th, the social media platforms of Emotional Justice and The AIEJ will reveal quotes, graphics and highlights from WITNESS, culminating in the full findings of both numbers and narrative online on November 19th.

Esther Armah, CEO, The Armah Institute of Emotional Justice says:- “We live in a world where men are taught that power and masculinity are about dominion and control – especially over women. Emotional Justice works to build a masculinity of empathy and accountability, to raise emotional awareness and redefine men’s relationship with power. One way we are doing that is by sharing what men witness, and how what they witnessed shaped their ideas of masculinity, and who men are, how they act and when they use their voice, and when they use their silence.”

Theresa Adezewa Aryettey, Project Assistant, The AIEJ interviewed many of the men and said:- “This project has made me appreciate the need to amplify and have in-depth discourse on gender violence with men. Even as adults, many men are battling with things they witnessed from their childhood, these things are still taking a real toll on them.”

International Men’s Day is a global day celebrated in 70 countries around the world.

‘WITNESS’ is the latest in the annual series of Emotional Justice masculinity projects. Previous projects include 2021’s ‘SEX & THE AFRICAN MAN’ which featured artist Wanlov and Economist and Broadcaster, Patrick Stephenson; 2019’s #IamUNLEARNING video featuring a group of Ghanaian men activists and educators, and in partnership with White Ribbon Ghana.

Each project used creative and interactive ways to give voice to the emotional worlds of African men; and to explore and exchange issues of masculinity , power, love, loss and violence. The AIEJ’s annual project works to affirm a masculinity of honesty, empathy and accountability, one that wrestles with power in service of progress, an end to gender violence, a healing and a fuller humanity.

The interviews took place over the course of almost eight months. Each interview was conducted orally, then transcribed, and The AEJ engaged with Viz 4 Gender to present the findings in visual graphics to create easily digestible information. There were 50 interviews. They are anonymous with each man being named and described as WITNESS 1 to WITNESSE 50.

Anonymity was to protect identity given the stories being shared, and honor the vulnerability that some of the men felt

WITNESS is led by The AIEJ and in partnership with Life Relief Foundation based in Takoradi.

International Men’s Day is observed globally on November 19 every year. Because of global patriarchy, it is treated with derision, The AIEJ engages the day to focus on redefining masculinity and reckoning with masculinity narratives. In Ghana, and across many nations on the Continent, we need new conversations about masculinity, that focus on opening up space to explore our notions of power, manhood that justify, normalize or diminish violence against women. WITNESS invites men to focus on action, challenge notions of power and share and hear from men.

The Armah Institute of Emotional Justice (The AIEJ).

The AIEJ is an Accra-based global institute, and the implementation home of Emotional Justice, a roadmap for racial healing. The AIEJ devises, develops, designs and delivers Projects, Training and Thought Leadership. The AIEJ works globally in Ghana, across the US and the UK. For more information:- www.theaiej.com. The AIEJ’s CEO is Esther A. Armah, an international award winning journalist, playwright, and international public speaker.

BIG DRAMA – Ken Ofori-Atta Grilling in Parliament: As his Cousin refuses to sack him