Government broke grounds for the construction of the 5,000 Volta Regional Youth Resource Centre in March 2018, alongside 9 others across the country. 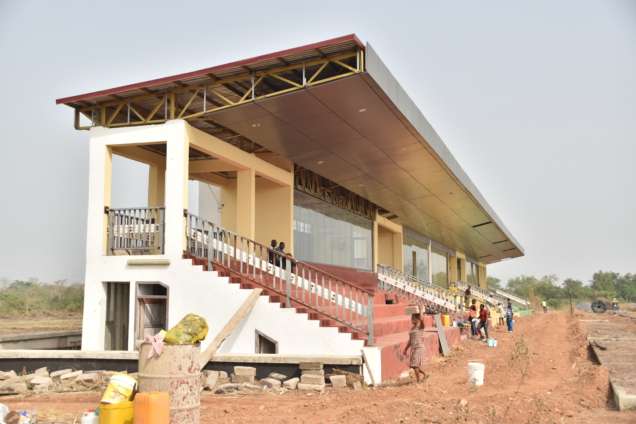 The project, a multipurpose sporting facility stalled for about two years due to the government’s directive to put on hold five out of 10 of the Youth Resource Centre projects.

Government broke grounds for the construction of the 5,000 Volta Regional Youth Resource Centre in March 2018, alongside 9 others across the country.

Wilkado Construction Limited immediately moved to site hoping to deliver the project, situated on a 100-acre land at Adaklu-Tsrefe, on schedule.

However, the nature of the land posed a challenge to the construction firm, hence the delay in the progress of work.

Following a directive from the government, the contractor was compelled to abandon the project after completing just 55% of the work in 24 months.

Chief Executive Officer of the National Youth Authority, Pius Enam Hadzide, during a recent working visit to the project site explained that the government decided to concentrate on completing five of the facilities taking into consideration its financial strength.

He clarified that the Authority decided to put on hold facilities in the Volta, Greater Accra, Northern, Upper East and Ashanti regions and pool resources together to complete the other 5 regional facilities.

According to Hadzide, 97% of the work has been completed on the phase one of the Volta Regional Youth Resource Centre which includes the construction of the 4 spectator stands, FIFA standard football pitch, among others.

He added that the government is considering a proposal by residents in the Volta Region to expand the facility to a 10,000-seater capacity and assured the traditional authorities and residents that the project would be completed by June 2023.

The contractor has since moved back to site to complete phase one and commence phase two of the sporting facility.

Niifio Kotei of KNAK Design Partnerships – the consulting firm in charge of the project, explained that the phase 2 would include the fence wall, the 8-lane athletics tracks, multipurpose courts and external works.

Chief Executive Officer of Wilkado Construction Limited, Torgbui Gbeworza II, is optimistic about delivering the facility in June, “if everything goes on well”.

“So many things can go wrong, the weather can be the factor, technical hitches, even including finance, but the Minister has promised us,” he said.

The Volta Regional Youth Resource Centre, when completed, would house an ICT centre, entrepreneurship and counselling centres, and a restaurant.