What if the Black Stars had respected Portugal and Ronaldo a bit less in the first half? 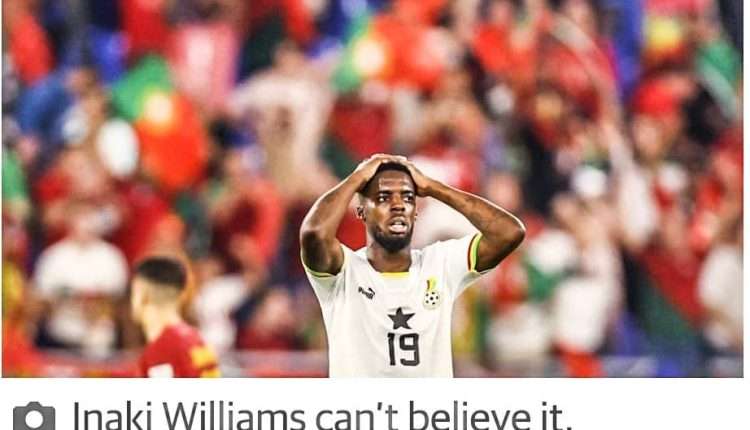 Surely, now the day is over, and as the old hymn says, shadows of the evening have stolen across the sky… For the past couple of hours, I have sat here stealing forlorn glances at my Black Stars shirt draped across the shoulders of the dining table. Its task is unfulfilled. It started the day anticipating a joyous night that would steal like the evening shadows far beyond today’s horizon.

The other focus of my attention is a Reuters photo taken by Hannah McKay and published by the UK newspaper the Guardian (see below). It shows Black Stars striker Inaki Williams with his hands on his head in an expression of regret and pain familiar to people of all cultures. Of course, his gesture is related to his botched effort in the dying seconds of the match when with a better composure he could have rescued a point for Ghana. However, the photo speaks for all of us and asks the same questions 30 million armchair coaches are asking across the nation tonight.

In many ways this was a strange match. Ghana had only 31 percent possession of the ball in the first half during which period it did not have a single shot at the Portuguese goal. At one point when a Portuguese defender gave his goalkeeper a back pass, the commentator quipped that the defender just wanted to remind the goalkeeper that a football match was in progress! The second half told another story but still the unsettled feeling remained.

There are many positives to take from the more dynamic second half but even so, one struggled to find a team philosophy or purpose in the Black Stars progress on the pitch. Of course they wanted to win but football is also about establishing values and character even on the field of play. Back in the good old days when the name Black Stars struck terror across the continent, our players played with pride and created a Ghanaian identity in the game. Think about Brazil and Samba Football, or the Netherlands and Total Football in the days of Johan Cruyff. Even today when the game has taken on a more philistine nature, teams play around dominant characters whose exploits tend to define the whole teams identity.

Inaki Williams’ hands on his head appears to be as much as wondering: what was all that about? Don’t get me wrong. The Black Stars did well. They were not disgraced. They can walk with their heads held high as they prepare against the next foe. However, when the ninety minutes are over and the players and spectators go home and the commentary ends, we want that sweet aftertaste that lingers and licks your brain in that nice way. It is hard to define but you know what I mean, don’t you? I am not feeling that tonight, but there is more to come; we have miles to go before we sleep!

This Question: So Why Did the Minority Approve Ken Ofori Atta