World Cup: Ghana’s Inaki Williams Has Hopes for a Goal

“Everything depends on us and what we do against Uruguay and I am sure that if we get the three points, we’ll be in the next round,” 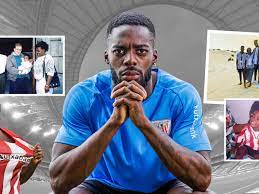 Ghana striker Inaki Williams has yet to get off the mark after opting to play for his parents’ homeland rather than Spain, but the Athletic Club Bilbao player is still satisfied with his adopted country’s World Cup displays.

“We are where we want to be,” he said in the wake of Ghana’s thrilling 3-2 win over South Korea that means a win against Uruguay in their last group game will see them into the last-16.

Although Williams was born in Spain, his parents are originally from Ghana, and despite playing in a friendly game for Spain in May 2016, he chose to switch his loyalties ahead of the World Cup.

“People can see we are dynamic and fast in attack. We have scored five goals against Portugal and South Korea and we are in the right place,” added Williams.

“Everything depends on us and what we do against Uruguay and I am sure that if we get the three points, we’ll be in the next round,” said the striker, who is keen to get off the mark.

“I’d like to score a goal to help the team,” said Williams. “The people are right behind us, because they are seeing a brave team that tried to take its chances.”