It is no secret that Ghana today is in debt Distress. This has been  confirmed by both the finance minister and the International  Monetary Fund (IMF). 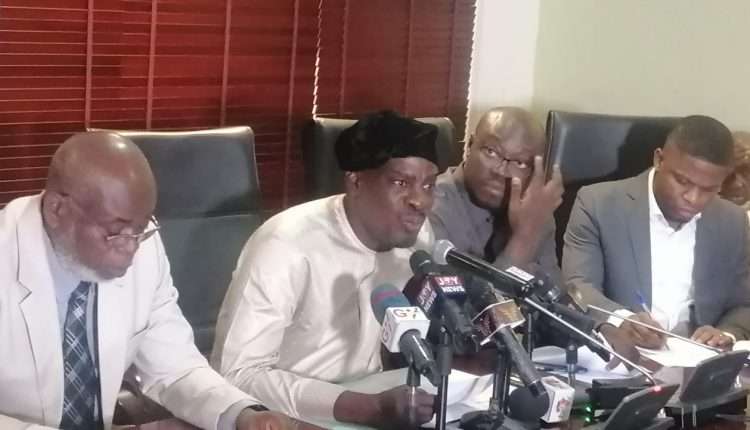 PRESS STATEMENT READ BY THE MINORITY LEADER AND  MEMBER OF PARLIAMENT FOR TAMALE SOUTH, HON HARUNA  IDDRISU ON THE DEBT EXCHANGE PROGRAMME BY THE  NANA ADDO / BAWUMIA GOVERNMENT

Good Morning, Ladies and Gentlemen of the Press,

We are here today to register our profound dissatisfaction with the  Nana Addo Bawumia Government Debt Exchange Programme that is  threatening the very survival of our financial sector. Today, Ghana  is rated alongside Sri Lanka and Lebanon, what an irony! a reflection  of the horrendous mismanagement of the economy.

It is no secret that Ghana today is in debt Distress. This has been  confirmed by both the finance minister and the International  Monetary Fund (IMF).

The Minister of Finance, in the 2023 Budget Statement, presented a  gloomy picture of Ghana’s debt situation. He said at paragraph 275:  “… our internal Debt Sustainability Analysis (DSA) shows that  the public debt position in the medium-term is  unsustainable and requires immediate redress. The analysis  identified a number of risks including cost of funding risks,  rollover/refinancing risks, elevation in market risks, contingent

The Minister then proceeded to announce a “debt operation  programme” at paragraph 276 thus:

On 5th December, 2022, the finance minister in announcing the  commencement of the debt exchange programme [without engaging  necessary stakeholders as promised in paragraph 278 of the 2023  Budget Statement] gave a sad report of Ghana’s debt situation:

“The Debt Sustainability Analysis (DSA) demonstrated  unequivocally that Ghana’s public debt is unsustainable, and  that the Government may not be ab le to fully service its

debt down the road if no action is taken. Indeed, debt servicing  is now absorbing more than half of total government  revenues and almost 70% of tax revenues, while our total  public debt stock, including that of State-Owned  Enterprises and all, exceeds 100% of our GDP. This is why  we are today announcing the debt exchange which will help in  restoring our capacity to service debt.”

So much for a solid Economic Management Team. “We have the men”  indeed!

Ladies and Gentlemen, the question is; How did we get here? How  did we get to this hapless situation as a sovereign State? How did we  get to this pit? Simple. Reckless borrowing! Sadly, the NPP  Government led by Nana Addo-Bawumia has not learnt any lesson.  The NPP was not only reckless in borrowing but it has been reckless  in announcing and implementing the Debt Exchange Programme. It  is clear that the NPP Government did not properly think through this  whole idea of debt exchange programme. This has led to the manifest  confusion in the implementation of the ongoing debt exchange  programme. Ghanaians will recall that during the Sunday, 30th October, 2022 Address to the Nation, the President assured all of us  that Government’s negotiations with the IMF will not affect individual  and institutional investors. The President said:

“I also want to assure all Ghanaians that no individual or  institutional investor, including pension funds, in Government  treasury bills or instruments will lose their money, as a result

of our ongoing IMF negotiations. There will be no “haircuts”, so I urge all of you to ignore the false rumours…”

Shortly after the presentation of the 2023 Budget Statement, the  finance minister, on 4th and 5th December, 2022 also announced to  the whole world that “There will be NO haircut on the principal of  bonds” and that “Individual holders of bonds will not be affected.”

Talk about the sudden U-turn to include individual bond  holders.

It is trite knowledge that substantial number of moneys in financial  institutions come from private individuals. It is, therefore, highly  reprehensible for the finance minister to say that financial  institutions will be affected by the debt exchange programme but  individual bonds holders will not be affected. What kind of warped  logic is this?

The failure of the Nana Addo / Bawumai Government to fully engage  the relevant stakeholders in the Debt Exchange Programme has led  us to this confused state and implementation challenges.

collapse of the financial sector by a government which went haywire  on a borrowing spree. The future sustainability of our insurance  companies cannot be guaranteed under this poorly crafted Debt  Exchange Programme. Indeed, the Debt Exchange Programme as  proposed and implemented now cannot be in the interest of our  financial institutions and insurance companies. It certainly is not in  the best interest of Ghanaians.

It is on this score, that we the NDC Minority Group calls on the Nana  Addo /Bawumia Government to immediately suspend the ongoing  Debt Exchange Programme. There should be deeper consultation  and greater transparency about Ghana’s total debt and its  management. The Nana Addo /Bawumia Government cannot  continue to manage Ghana’s economy like a private entity.  Ghanaians deserve to know how much is involved and how long the  debt exchange will take. It is not just about people’s investment, but  it is much more about people’s lives and livelihood. The Nana Addo  /Bawumia Government should suspend the Debt Exchange  Programme now!

STATE OF OUR ECONOMY

An unsustainable public debt on which we have defaulted, a rapidly  depreciating currency, hyper inflation and rising interest rates,  an excruciating cost of living crisis resulting in considerable  harsher economic conditions which has led to mass suffering of  Ghanaians, are but a few of the symptoms of the economic

During the 2020 election year in particular, the Akufo Addo/Bawumia government consigned fiscal discipline to the  dustbin and resorted to high-expenditure, populist and misguided  programs which contributed immensely to the accumulation of  Ghana’s current unsustainable Public Debt.

The inevitable but dire consequence of this reckless and irresponsible  behavior was soon to manifest after the elections.

Even when it became abundantly clear, that an IMF program was the  surest way to halt the decline of the Ghanaian economy and restore  badly needed investor confidence, Alhaji Bawumia and his EMT  refused to budge, preferring instead to sell a dubious narrative that  they had capacity to resolve the challenges without external  intervention.

Statement: We Condemn The Horrific Terror Attacks In…

They were however, compelled In July 2022, to change their  intransigent position this tune and applied to the IMF for a financial  “bail out” of US$ 3 billion.

A Debt Sustainability Analysis (DSA) conducted by the IMF revealed and confirmed the Minority’s earlier position, obvious, that Ghana’s  debt was unsustainable and as a prerequisite for granting Ghana’s

request, we were required to bring our total Public Debt to a  sustainable level of 55% of GDP.

It is in a bid to meet this IMF conditionality that this government has  embarked on a Debt Restructuring Program dubbed a Debt Exchange  Program to bring our debt obligations to sustainable levels.

Stripped of the fancy jargon, this means that both domestic and  external bond holders will not be receiving interests and principal  payments due them from government in the agreed amounts and  within the agreed timeframe.

This is cynically referred to as “haircuts” and will be especially  catastrophic for domestic bond holders who primarily consist of  banks, pension schemes, other financial institutions, and  individuals.

The international capital market which had been available to the  Ghana Government to sell Eurobonds lost faith in our ability to  service loans and shut us out.

Even so, there was sufficient time and opportunity to avert economic  collapse in 2021 by taking advantage of some debt relief initiatives  tabled by some multilateral and bilateral partners to reduce our debt.  Among these was the Debt Service Suspension Initiative (DSSI) which  would have resulted in the lowering of the amount of revenue we  pumped into debt service.

Beyond that, was the Common Framework for Debt Treatment  proposed by the G20 countries which would also, have led to  significant debt write-off.

But characteristic of this administration, they chose the naïve and  reckless path of borrowing to resolve the problems.

Effects on individual bondholders– the inclusion of individual  bondholders in the Domestic Debt Exchange, contrary to initial  assurances from both the President and his finance minister, would  all but wipe out Ghana’s middle class and impose harsh suffering on  them, their families, and dependents. We now know that the reality  is different. What Minister Ofori-Atta announced is different from  what is being implemented. Ghanaian individuals have started  receiving text messages from their banks. Yesterday, about 1.3  million affected individual bold holders petitioned Parliament for a  reversal of the Government’s Debt Exchange Programme. This must  be the largest and voluminous petition on a single matter ever  presented to Parliament in our country’s history. It is inconceivable  to accept that individual bonds will be affected.

From the outset, there have been clear inconsistencies in pronouncements and the actual implementation. The haircut is real.  The NPP Nana Addo /Bawumia Government should give us a break!

The Nana Addo /Bawumia Government cannot borrow Ghana into a  ditch and further drive us into a bottomless pit.

contributors have been given. This anomaly must immediately  be rectified.

In view of the above,

WE CALL ON THE GOVERNMENT TO IMMEDIATELY SUSPEND  THE DOMESTIC DEBT EXCHANGE PROGRAM AND ENGAGE IN  MORE COMPREHENSIVE CONSULTATION ON THE MATTER  WITH ALL STAKEHOLDERS AND THE GHANAIAN PEOPLE.

EFFECTS OF THE DOMESTIC DEBT EXCHANGE PROGRAM AS  CURRENTLY DESIGNED.

WE WISH TO TAKE THIS OPPORTUNITY TO INDICATE OUR  INTENTION TO EMBARK ON NATIONWIDE ROAD SHOWS TO  FOSTER DEEPER UNDERSTANDING OF THIS MATTER AND  RALLY GHANAIANS TO DEMAND A MORE FAVOURABLE  RESOLUTION OF THE UNPRECEDENTED ECONOMIC CRISIS  THE BAWUMIA-LED ECONOMIC MANAGEMENT TEAM HAS  PLUNGED US INTO.

Statement: We Condemn The Horrific Terror Attacks In Pakistan