Galamsey, Corruption and Land Looting will continue to thrive in Ghana as President Akufo-Addo encourages it by doing nothing and Ghanaians particularly the media ONLY TALK FOR A WHILE AND DO NOTHING. 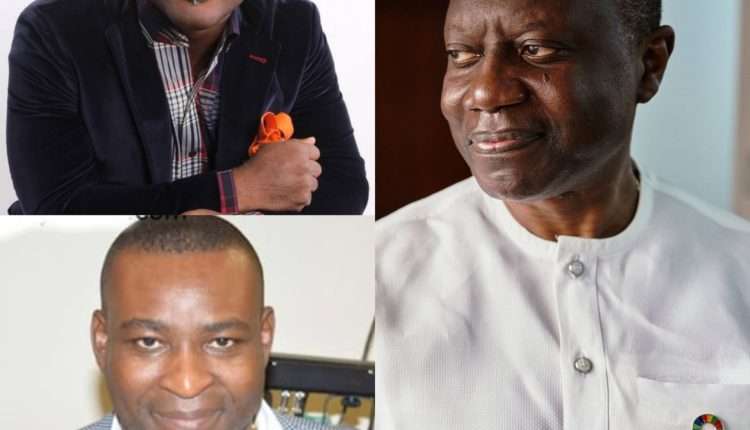 Ken Ofori-Atta is still at post as Finance Minister.

Galamsey, Corruption and Land Looting will continue to thrive in Ghana as President Akufo-Addo encourages it by doing nothing and Ghanaians particularly the media ONLY TALK FOR A WHILE AND DO NOTHING.

Good News is, the Cathedral Project will not continue.

Bad News is, Rev. Victor Kusi-Boateng and Dr. Paul Opoku-Mensah have not been interdicted to avoid interfering with investigation…

The Board of Trustees must speak to the Letter written by their former colleague Archbishop Dag Heward-Mills; if they will not resign for the serious reasons he gave for his resignation.

MEN OF GOD MUST BE MEN OF HONOUR.

WHOSE NAME IS ON THE CATHEDRAL LAND TITLE CERTIFICATE?

The walls of Jericho will soon come down for Ghanaians to see for themselves what GHC339MILLION of their tax money has been used to do on the $1billion Prime Osu Mantse Layout Land.

Please read the Article below;

THAT WAS THE FIRST OF A SERIES OF LIES ABOUT THE CATHEDRAL.

The Cathedral Project constitutes a very large tract of Prime Land, worth hundreds of millions of dollars, contrary to what the President promised as token contribution of the State?

Read and refer to the Nii Kpobi Tettey Tsuru III vs Attorney General judgement as well as the Osu Mantse Layout Land document.

Judicial training school and Judges Bungalows were demolished, and the judges were relocated temporarily to
Cantonments and hopefully permanently accommodated at Airport both LA Stool Lands…

The Osu Chiefs and People may be losing FOREVER the Prime Ridge Land because of the illegal and unconstitutional citing of the Cathedral without proper acquisition by the State.

SO LA HAS LOST LANDS TWICE; because of the demolition of Judges accommodation.

Malian Ambassador’s residence is to be relocated to Airport Residential area also belonging to LA.

LA LANDS ARE NOT AUTOMATICALLY STATE LANDS OR PUBLIC LANDS.

The President of Ghana may through an Executive Instrument or exercise of Eminent Domain acquire land anywhere in Ghana for a particular stated public purpose for a specified period and pay appropriate compensation to the Original Land Owners.

The President cannot takeover any Land anywhere in Ghana without due process depriving the Original Land Owners of their Lands FOREVER.

The Constitution is clear in Article 20 (5)(6) on how legally and constitutionally Lands acquired by the State for a particular purpose [Judges Accommodation, Passport Office etc] may be returned to the Original Land Owners in the event of charge of the purpose [Cathedral], through a right of first refusal.

The La Lands Looting has been rampant especially in the Prime Cantonments, Labone, Airport, Legon etc.

La Lands acquired for State institutions such as the University of Ghana, GBC, GRA, CSIR and Civil Aviation Authority among others…

The East Legon Civil Aviation Land Looting was part of Lands Hon. Kennedy Agyepong accused Stephen Ntim of stealing and selling during his tenure as the head of the Lands Commission…

Most of the prime La Lands were fraudulently allocated to private persons between 2004 and 2008.

The long list of the Land Looters and particulars of the hundreds of Looting transactions was attached to the Article 146 Petition for the removal of Justice Sophia Akuffo which President Akufo Addo refused to act on for two years, and the Council of State refused to disclose receipt nor action taken and OccupyGhana pretended to be unaware that the so-called convey belt of the President was not working…

Will the Looted Lands be retrieved and returned to the La Mantse is trust for the LA STOOL?

President Akufo-Addo through an Executive Instrument E.I. 432 returned 409acres of Ashanti Lands including lands occupied by state institutions as well as the Military, to the Ashantihene in trust for the Subjects of the GOLDEN STOOL.

Kpletso near Burma Camp on 15th April, 2021 witnessed the shooting and assault by men in Ghana Army uniforms of journalists and some citizens of La, three of whom have since died of their injuries while the President and Commander-in-Chief of the Ghana Armed Forces has remained silent.

The Military High Command promised an investigation but till date not made public, Ghana Police Service and the National Media Commission refused to investigate while the CHRAJ investigation is still ongoing…

We will not wait to see Lands forcibly taken from the Original Land Owners end up in the wills of Government officials, their friends, families and business associates proposing to own these Lands FOREVER.

We will not be Spectators as the Lands are stolen…

The Lands Minister, Samuel Abu Jinapor has bee lamenting on national television that the people who are revered in our society” drive around on weekends looking for State Lands and Bungalows with little or no activity then come to his office to him to pressure him to allocate these prime lands to them.

THE NATIONAL CATHEDRAL LAND WILL NOT BE TAKEN BY THE PRESIDENT AND GIVEN TO PRIVATE PERSONS.