It would be recalled that on September 17, 2022, a mother and her three children reportedly drowned while fishing in the Keta lagoon 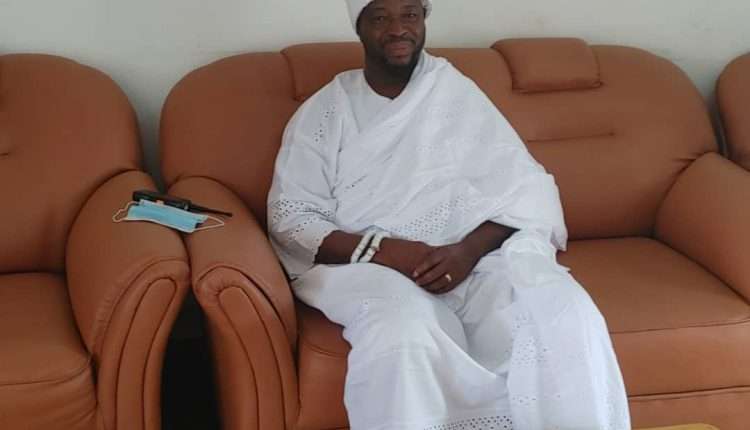 Paramount Chief of the Some traditional area, Torgbui Adamah III, has extended his condolences to the family of the four persons who lost their lives whiles fishing in the Keta lagoon close to the dykes constructed by Seven Seas Salt Company – a salt mining firm operating in the Ketu South Municipality of the Volta region.

Torgbui Adamah III, who was speaking in an exclusive interview with Ghananewsonline.com.gh said, contrary to assertions by a cross section of residents of the municipality that he was a saddist who didn’t share in the plight of his people, he was one person who had the interest and well-being of his subjects at heart.

He said he was saddened to hear disparaging and even derogatory comments being made against his person on some local radio stations to the effect that he as Paramount Chief was involved in some underhand dealings with Seven Seas Salt Company hence his seeming indifference to the happenings in the area and the plight of the father and family bedeviled with the tragedy.

It would be recalled that on September 17, 2022, a mother and her three children reportedly drowned while fishing in the Keta lagoon around the dykes dug by the salt mining company Seven Seas in it’s concession at Laklivikope near Denu with their father said to have looked on helplessly as all efforts by him to save his family failed due to the depth of the trenches.

The incident sparked widespread backlash against the mining company, leading to a massive demonstration staged by mostly the youth of the municipality who took to the streets to register their displeasure over the activities of the company which they described as illegal coupled with the numerous tragic loss of over fifteen lives witnessed since the company started its operations some years ago.

The aggrieved youth presented a petition to the government through the Ketu South Municipal Chief Executive with copies to all relevant institutions- calling on government to among other demands suspend the operations of the company.

They accused the company of destroying the lives and livelihoods of the inhabitants of the area alleging that the company did not possess the requisite documents from the relevant authorities like the Minerals Commission and the Environmental Protection Agency to warrant it’s operations in the area, adding that there was never a stakeholder engagement with the community before or ever since the company began its operations as stipulated in the Minerals Act (706) of 2006.

Torgbui Adamah III, in response to these allegations said although he was not the spokesman for the company, he was aware as a major stakeholder in the municipality that the company wasn’t operating illegally as being alleged.

He said he personally engaged the company and impressed upon them to make provisions for compensation to his people as he painstakingly observed that the activities of the company had actually affected the livelihoods of some of the people in the company’s catchment area.

He said after several consultations with the company and other stakeholders compensation was duly paid to the affected persons and wonders why accusing fingers should now be pointed at him by his own people.

“What we should be looking at now is how to support our brother who lost his entire family in this unfortunate incident and a way to prevent this from happening again rather than the unnecessary accusations and counter accusations”, which he observed “will only further sow seeds of discord among us”.

The Some Paramount Chief debunked claims that he was paid some hefty amount of money by Seven Seas Salt Company as compensation as the custodian of the area .

“I want to state emphatically that whatever money said to have been paid to me was actually paid to the Amu-Agade royal family of which i am a legitimate member”.

He added that those monies were paid to his family as legal owners of the company’s Adafienu concession per the terms of reference in the minerals act and not to him as a person and called on persons making such unfounded pronouncements to refrain from such for the the sake of peace, adding that it would have been prudent for those accusing him to call on him at his palace to ascertain the veracity or otherwise of those allegations as he was one person who welcomed everybody.

He said he considered it an affront to the chieftaincy institution when members of a community could rain insults on traditional leaders, throwing caution to the winds and with impunity describing those behaviours as uncalled for.

Meanwhile investigations conducted by Ghananewsonline.com.gh revealed that the company actually had in it’s possession all the relevant documents required for its operations.

We sighted the company’s Environmental Impact Assessment Report, Scoping Reports as well as other documents and authorisation from the Minerals Commission among others.

Additionally, the company had documents to prove that it actually carried out a thorough due diligence on its operations and also provided documents to support compensations paid and still being paid to persons whose sources of livelihood have been affected by the company’s operations in and around its concessions.

I was not scammed, I paid offertory – Victim of Agradaa’s money-doubling scheme narrates