Kudus got Ghana’s second goal in the first half after Mohammed Salisu had given the Black Stars the lead from a close range finish. 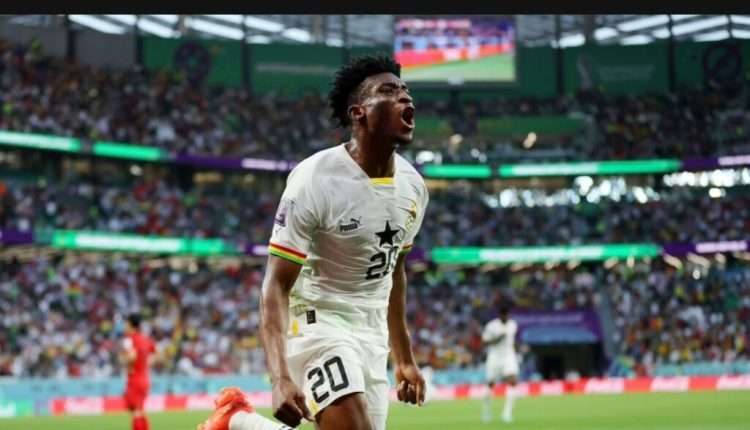 Kudus got Ghana’s second goal in the first half after Mohammed Salisu had given the Black Stars the lead from a close range finish.

Kudus jumped very high to connect to Jordan Ayew’s cross to score his first ever world cup goal for Ghana at the 2022 FIFA World Cup tournament in Qatar.

After the Koreans equalized in the second half of the match to make it 2-2 after the hour mark, the youngster rose to the occasion to bag his brace and Ghana’s third goal to make sure the Black Stars secured a hard earned 3-2 win.

With the two goals, the youngster has become the first ever Ghana player to score brace in a single game at the World Cup for Ghana.

Asamoah Gyan is Ghana’s and Africa’s top scorer at the World Cup with six goals, followed by current Ghana captain Andre Ayew who has scored three goals with Kudus breathing at his neck with two goals one assist in just two FIFA World Cup appearances for Ghana.

He could extend his goal tally for Ghana at the World Cup stage with a goal or two against Uruguay at Al Janoub Stadium on Friday evening in Qatar.

Ghana-Uruguay clash: We are not going for Revenge, we are going for a Win – Otto Addo